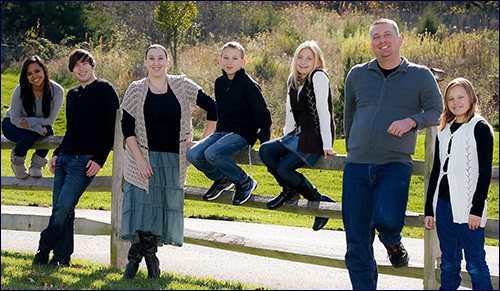 Meet Rose Marchik, a Jewish foster mother who has cared for over 150 children.

Meet Rose Marchick, biological mother of three, adoptive mother of two, and foster mother to more than 150 children over the last nine years in Olathe, Kansas

“The kids need a home, and we have one,” Marchick says with a simple shrug of her shoulder. “It’s no more complicated than that.”

An Orthodox Jew, Marchick says that as a child she knew she wanted a house full of kids. Foster care wasn’t something she envisioned then, but something she embraced as she found her niche in the world – professionally and personally. In her late 30s, she holds a PhD in psychology and three master’s degrees in related fields, equipping her to work with the most difficult of children. 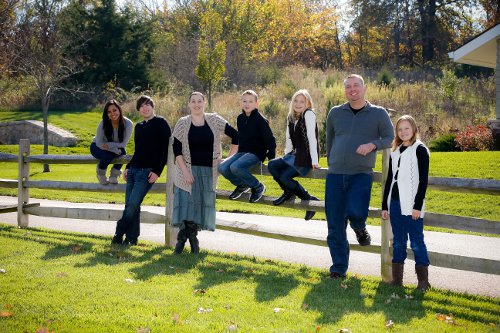 Marchick and her husband Clint accept kids who suffer from mental and emotional disorders such as fetal alcohol syndrome or reactive attachment disorder, the latter occurring in children who have been neglected and are unable to form a healthy emotional attachment with their primary care provider. There are those who have had bipolar disorder or schizophrenia, others who have come to her directly from juvenile prison. She prefers teenage girls, but will also take in sibling sets and younger children, as needed.

Marchick’s foster home is the only Jewish home in the area that will take in such severe children.

“We used to do a lot of emergency care for the police department,” she explains. “We would take in children in police protective custody, such as children who have been removed from their home for investigation. … The phone rings, they’ve got three kids – siblings. They come for three to five days and then they are gone. Or the charges are substantiated and they stay in foster care.”

The phone rings incessantly. Marchick is used to seeing social services or the cops on her caller ID.

Marchick’s foster home is one of the only such homes in the area that will take in such severe children; it’s the only Jewish one. The foster children are usually not Jewish, but they are always invited to Shabbat dinner, lunch, and even synagogue. She keeps accessible a bookshelf of Jewish wisdom – as well as books of other religions – to offer spiritual guidance to the youth who make their way under her doorpost. Each book is perfectly aligned in her immaculate home.

“I’m hyper organized,” says Marchick, explaining how she makes adding children to her already sizeable brood manageable. “You have to be. It is out of desperation.”

Currently, she is caring for two additional teenage girls and has to get seven children to five schools before 8 a.m. Four she drives, two take buses, and her oldest son, Tyler, drives himself.

Marchick has a color-coded chore chart on a white board. Each of her children is assigned a color and tasks that range from setting the table to making sandwiches to sweeping the floor. She adds the foster children into the rotation while they stay there.

The colors translate into people’s cups and glasses, towels, hairbrushes, and toothbrushes so everyone knows what is theirs.

To save money, she sews some of her children’s clothes. She shops off a grocery list, striving to average $1,000 per month for her vegetarian home. When her kids were little, she says, she’d wash 40 loads of laundry per week. Now, it’s closer to 20.

She equips her house for sanity. Her husband Clint, who travels all week for his role as a management consultant for Dewolff Boberg & Associates, helped gut the backyard and transform it into an organic garden. She calls is “therapeutic” for the children, all whom take part in the experience through spring and summer. She keeps a bowl of fidget toys easily accessible for the kids with attention deficit hyperactivity disorder.

Marchick’s own children are into it, too. Daughter Lily, a sixth grader at the Hyman Brand Hebrew Academy in Overland Park, Kan., is writing for her bat mitzvah speech about how she has learned something from each of the foster children her family has taken in. Tyler, a high school senior, says he almost doesn’t notice anymore – it is just part of their lifestyle.

Nikki Goldwater, the foster intake coordinator for Jewish Child and Family Services (JCFS) in Chicago, says the Jewish community needs more foster mothers like Marchick. She says JCFS works with around 100 children at any given time, and that there is always a surplus of children and never enough parents for the kids. A foster parent, Goldwater says, needs to be flexible, especially when working with challenging kids, and there has to be a commitment by the foster parent but also the ability for that parent to ask for help. JCFS in Chicago offers foster parent training, and Goldwater says it takes between six months and one year to qualify.

I tell my kids every day that the most important thing is making a difference by doing something.

The average length of stay of a foster child is about 14 months, although some children stay for very short lengths of time and other children may stay for longer periods, Goldwater explains. Many factors can affect the length of a child’s stay in foster care: the parents’ progress in mandated services; the availability of relatives or non-offending parents able to care for the child; court activity and findings.

“It is certainly hard work, but I cannot think of anything more rewarding than helping a child heal,” says Goldwater. “Kids come to us with a shattered sense of self, often feeling unlovable, and it is through the hard work of the foster parents that we see them blossom and come alive. … We need to teach children that even though scary things happen in the world, there are places they can be safe. We need good foster parents to do that.”

In Kansas, the walls of Marchick’s six-bedroom home are painted in softer colors, and in many areas she decorates with motivational quotes – from sources ranging from Mother Teresa to the Torah. The quotes aim to build confidence and to remind her children (foster, adoptive, and biological) that they, too, can change the world, one person at a time.

“It’s tikkun olam (repairing the world),” says Marchick. “The foundation of Judaism is doing active deeds. I tell my kids every day that the most important thing is making a difference by doing something. Every kid that comes here has been warm, safe and loved while they are here. We all wake up with the same number of hours that Mother Teresa had. What we choose to do with them is up to us. You cannot save the world, but you can do what is in front of you. Most good things are hard. ”

Mayaan Jaffe made aliyah from Leawood, Kan. three years ago. She is an Israel Hasbara Committee feature reporter and researcher and a latest news reporter for Arutz Sheva. Jaffe writes articles and press releases for publications across the country and abroad from her caravan in Gush Etzion.