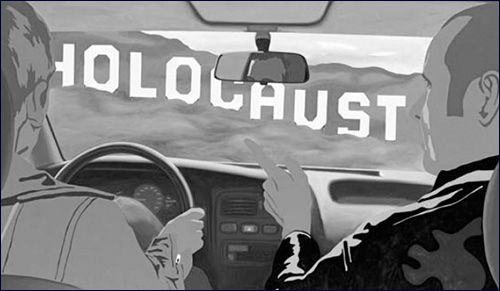 There is a recent trend to trivialize and mock the Holocaust through art. What’s behind these shocking depictions?

Glimpsed through the front windshield of a car approaching Los Angeles, the famous letters of the “HOLLYWOOD” sign spell out “HOLOCAUST” instead. A video depicts naked concentration camp inmates playing tag in front of crematoria, while another shows an elderly Holocaust survivor entering a tattoo parlor – and asking to have his concentration camp tattoo renewed.

These tasteless images are part of a government-funded art exhibition that recently opened in Estonia’s Tartu Art Museum. Dedicating to “remembering” the Holocaust in various ways, including “through the prism of humor,” the show is advertised with a poster that resembles an iconic photo taken after the liberation of Auschwitz – except in this version, the Jewish prisoners are well-fed and dressed, and grin slyly, menacingly, at the camera.

The show has sparked outrage in Estonia and beyond – it’s been criticized by Estonia’s tiny Jewish community, as well as by Estonia’s Georgian and Muslim communities, and by Israelis and Christians abroad. So far, the museum has defended its depictions of the Holocaust. It’s hardly alone. A number of representations of the Holocaust in recent years have shown it in an irreverent, even mocking manner, and the trend is accelerating. As more extreme modes of looking at the Holocaust become acceptable, new artists are seeking fresh ways to shock.

Take the case of Zbigniew Libera, one of the artists whose work is currently on display in Estonia. Back in 1996 he sparked international horror by creating a Holocaust Lego set: including Lego crematoria, Lego chimneys, Lego dead bodies, Lego pieces showing Nazis beating skeletal Jews, Lego Nazis torturing Jews with electro-shocks, and piles of severed Lego limbs. If he meant to shock, he succeeded: Libera was banned from exhibiting his artwork at the Venice Biennale, and the Lego toy company tried to persuade him to stop exhibiting his piece. But today, Libera’s Holocaust Lego set is considered mainstream. It’s been exhibited around the world, including in 2002 in New York’s Jewish Museum. In 2012, Warsaw’s Museum of Modern Art purchased the piece for its permanent collection, calling it “one of the most important works of contemporary Polish art.” 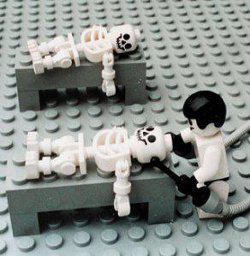 A similar process of acceptance met one of the videos in the current Estonia exhibition: Artur Zmijewski’s film of naked Jews playing tag inside a concentration camp was considered so shameful a mere three years ago that it was banned from being shown inside Berlin’s prestigious Martin-Gropius Bau exhibition hall. Today it has been embraced by mainstream artists and critics alike. In fact, much of Zmijewski’s work uses images of the Holocaust, and those outside the world of agit-prop art might be shocked at what is now the new norm in dealing with the Holocaust in the cutting edge art world.

A New York Times reviewer once noted of Zmijewski that “a weird…sadism animates many of his works,” and this quality – often aimed at the Holocaust – has helped propel him to fame. An early success was the art instillation “80064”, displayed in Tufts University’s Art Gallery in Medford, Massachusetts, in 2006. “80064” features Zmijewski badgering a confused 92-year old victim of Auschwitz to get the fading tattooed numbers on his arm re-inked; when the fearful man hesitates, Zmejewski is seen bullying him to complete the task.

“80064” and other projects boosted his reputation so much that in 2012, Zmijewski was appointed curator of the prestigious Berlin Biennale in 2012. There, he displayed the video of naked Jews playing tag now on show in Estonia and solicited a number of other art pieces that dealt with the Holocaust, Jews, and Israel. (One controversial element of his Biennale was a forum for extremist anti-Semitic and terrorist groups to speak publicly.)

What’s behind these shocking depictions of the Holocaust? For some, pure anti-Semitism seems to be a motivation. That seems to be the case of one artistic competition currently underway: on January 24, 2015, two cartoonist associations in Iran announced the Second International Holocaust Cartoons Contest, soliciting artwork that mocks or denies the Holocaust. The contest, which enjoys the apparent backing of the Iranian government, is Iran’s response to the use of pictures of Mohammed by the French magazine Charlie Hebdo (the same publication whose staff was massacred by Islamic extremists in Paris on January 7, 2015), and promises a hefty prize to the winners.

For others, the relentless use of Holocaust imagery seems to desensitize people to its horrors. That was the rational given by the artist Tom Sachs in 2002, after his exhibit “Prada Deathcamp” caused outrage when it was shown at New York’s Jewish Museum. A model of Auschwitz made out of a Prada hatbox, Sachs said he was “using the iconography of the Holocaust to bring attention to fashion.” The Holocaust did not interest him, he explained: “My agenda isn’t about making a point about the Holocaust. I don’t think any of the artists in the show are… We’re mostly in our 30s and 40s, and we have a certain distance from those events.”

Swedish artist Carl Michael von Hausswolff seemed similarly disengaged. On a visit to Majdanek concentration camp in 1989, the artist stole some ashes of murdered victims from one of the crematorium ovens there. In 2010, the artist decided to "do something" with these stolen human remains. He mixed the ashes with water and used it as paint. The resulting canvass was displayed as part of an installation called "Memory Works" in the Swedish city of Lund in 2012. Although Hausswolff was investigated by police for tampering with buried human remains, the owner of the gallery was unapologetic, saying only "this exhibition raises a lot of questions, and I think people should make up their own mind."

This desensitization has effects far beyond the art world: depicting the Holocaust as something ordinary or funny makes it easier to trivialize it or rationalize it away. “I can see the tendency of revision, to try to rewrite the Holocaust,” says Inna Rogatchi, a filmmaker and activist and co-founder of the Rogatchi Foundation. “It’s so black and white, people feel uncomfortable with that.” Current artistic representations of the Holocaust try to normalize the event, making it easier to deal with today. The results can make some uncomfortable.

In 2003, for instance, the animal-rights group PETA launched a call for ethical treatment of farm animals called “Holocaust on Your Plate.” Consisting of 60 panels of pictures showing both Jews being murdered in the Holocaust and animals reared on farms, PETA asked people to consider becoming vegetarian, and issued a call to the Jewish community to back their initiative. When the Anti-Defamation League criticized PETA’s exhibit as insensitive to the memories of those murdered in the Holocaust, PETA stood by its comparison.

The results of mocking and using the Holocaust are desensitization and confusion. A 2014 survey showed that two thirds of people world-wide haven’t heard of the Holocaust, think it is a myth, or believe it to be greatly exaggerated. One poll showed that 17% of university students in India admired Hitler as an ideal type of leader. In 2014, a mayoral candidate in Ontario, Canada, praised Hitler’s “leadership qualities” – then stood by his comments in the face of criticism, insisting that Hitler’s qualities could be “positive” in different circumstances.

At times, confusion about the Holocaust can tip over into anti-Jewish stereotypes. That seems to have been the case in 2014, when southern California’s Rialto Unified School District used classic anti-Jewish terminology to ask eighth graders to write an essay on whether the Holocaust “was an actual event in history, or merely a political scheme created to influence public emotion and gain wealth.” (The school district withdrew the assignment after a public outcry.)

Twenty five years ago, responding to artistic representations that he felt trivialized the Holocaust, Elie Wiesel explained why it was so hard to represent by quoting a story written by a fellow survivor. In it, a young Jew is told by an SS officer, “One day you will speak of all this, but your story will fall on deaf ears. Some will mock you, others will try to redeem themselves through you. You will cry out to the heavens and they will refuse to listen or to believe….”

In the past quarter century, the bounds of what is acceptable to say about the murder of six million Jews have only been pushed further. As the Holocaust is relentlessly misused, trivialized, even mocked, what can we do in response today? Elie Wiesel’s advice from 25 years ago is even more relevant to us today. Study the Holocaust, he urged; educate yourself about its horrors. Then, “Listen to the survivors and respect their wounded sensibility. Open yourselves to their scarred memory, and mingle your tears with theirs,” Wiesel urged. “And,” he implored, “stop insulting the dead.”

Does the Holocaust Still Matter?
Why Are The Prayers Of Yom Kipur So Repetetive?
Ha'azinu 5783: A Time for Unity!
Twisted Thinking
Comments