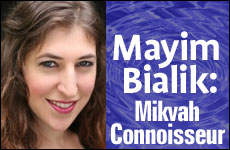 Celebrities endorse everything from cars to perfume to salad dressing. But actress Mayim Bialik may be the first-ever celebrity spokesperson for the mikvah, or ritual bath, and the Jewish laws of family purity. In fact, having been given the name Mayim Chaya at birth, some might even suggest that she was destined to speak out about the benefits of immersion in living waters.

Having returned to acting relatively recently after earning a doctorate at UCLA and giving birth to two boys, the 36-year-old is riding the wave of publicity cresting in the wake of her landing the role of Amy Farrah Fowler on the hit CBS sitcom “The Big Bang Theory.”

In addition to making the requisite appearances on the late night talk shows and the red carpet at awards ceremonies, she has also been hitting the author tour circuit to promote her new book on attachment parenting titled, “Beyond the Sling: A Real-Life Guide to Raising Confident, Loving Children the Attachment Parenting Way.” Somehow, she is also finding time to share her insights about being both a mother and a publicly observant Jewish figure — including her use of the mikvah — in her regular posts for Jewish parenting blog Kveller, and at speaking engagements around the country.

Bialik also managed to squeeze in a sit-down conversation about mivkah with The Times of Israel after speaking at one such event, a fundraiser for the Community Mikvah of Silicon Valley, a program of the Jewish Federation of Silicon Valley. She admitted that it’s a bit of a balancing act to concurrently live a Torah-centric life in Los Angeles and work in the entertainment industry. Nonetheless, Bialik, who hasn’t worn pants in five years, feels it is important for her to be upfront about her frumkeit so that she can be a positive role model for other Jews, especially young ones.

She was impressed with thousands of years of scholarship and mystical teachings about the mikvah.

Dressed in a knee-length, long-sleeved floral print dress and platform sandals, Bialik prefaced her remarks to the crowd of 160 men and women of all ages at the Addison-Penzak JCC (in Los Gatos) by saying, “I don’t speak as an authority. I’m just sharing my personal experience with mikvah. I live a life governed by Jewish law, but I don’t have a religious agenda.”

After offering an overview of her career and some details about her family history, the actress shared the story of her journey toward halachic observance, and how the mikvah played a key role in the process. A self-described intellectual second-wave feminist, Bialik emphasized how impressed she was with the “tremendous scholarship and mystical teachings for thousands of years on mikvah.” Noting that she believes in being given all the information and then deciding for herself what to do, she emphasized that it was “my choice to embrace the halachot surrounding mikvah.”

Bialik, known for her impeccable comedic timing, used humor to dispel myths about the mikvah and to tell how she learned about mikvah etiquette and all the laws and practices surrounding the observance of the family purity laws. For modesty’s sake — and the fact that her mother-in-law was in the audience — she did not go into detail about the latter. She spoke with complete seriousness when she explained that going to the mikvah has made her “the authority on my body. I know the cycles of my body, and it’s empowering for me.”

Jokingly declaring herself a “mikvah connoisseur,” Bialik shared her impressions of various ones she has visited around the world. “Every mikvah has its own personality, but the waters are the same,” she remarked.

Her personal experiences with oft-maligned mikvah ladies have been uniformly positive, leading her to admonish people to remember: “mikvah ladies are people too.” She has found that the only difference she found between Israeli mikvah ladies and American ones is that “the Israeli ones are, well Israeli.” In other words, they declared — comparatively less enthusiastically — her immersion “kasher” instead of a Brooklyn-accented “kosher.”

Following her presentation, Bialik met with a group of 15 high school and college students. Was she disappointed that they only asked her questions about “The Big Bang Theory” and her acting career, and didn’t once mention mikvah?

As someone who came late to observance, she knows that mikvah is not the first thing you need to hear.

“Not at all!” she exclaimed. “To me a lot of this is about just laying the foundation, especially with young people. You lay the foundation for them by having a positive role model who’s Jewish. You let them hear gently about observance,” she explained.

“I speak pretty reverently about my relationship with God, but you have to speak about it differently with young people. You want to be accessible to young people and not hit them over the head,” the actress said. “As a ba’al teshuva, someone who came late to observance, I know how important it is that mikvah not be the first thing you hear.”

“I don’t discuss sexual or marital intimacy when men are present,” she cautioned. But she does speak frankly with women. “I give a really fantastic, fun, interesting talk about the sanctity of the Jewish intimate relationship,” she offered. “I’m not a rebbetzin, so I don’t talk from that level, and I’m not a family counselor. But I speak about the enormous complexity and beauty that structure around intimacy can provide, which I specifically learned about through the mikvah.”

Although this particular group of young people was not inclined to delve deeper into the topic, Bialik nonetheless does enjoy talking about it with young women in their late teens and early 20s. “It’s nice to have the opportunity to talk to them, especially those who didn’t know about it. Because that’s the time in your life when all of the romance and all that stuff is kind of brewing — and how interesting to learn about a practice that is designed to regulate in healthy ways both your cycle and the concept of intimacy,” she said.

It’s one thing for her to talk about these things with community groups or with curious young Jews, but what about with her Hollywood colleagues?

“Most of my Jewish colleagues wouldn’t even think about the mikvah,” she reflected. “For most people, there are a million other things that they think about and care about.

Being a public Jew is about knowing about when to be private, too.

“It’s generally not terribly popular to be a super-religious person or feel like your whole life is about being a humble servant of God,” she said. “It doesn’t resonate with a lot of people, and it doesn’t have to. For me, being a public Jew is about knowing about when to be private, too. Not to hide it, but that I don’t have to advertise every aspect of my observance.”

However, since all of her Kveller posts go out through Twitter, those among her colleagues who follow her know. Some of the show’s writers follow her, and she is close with one of the writers who is “religiously inclined.” Bialik and he engage in Jewish study together and talk about related things. “He’s my people, as it were,” she quipped.

The multi-talented Bialik admits that the pace of her life has been exhausting lately. “The publicity machine, it keeps going. I’m exhausted but it’s a true blessing that people want to hear me talk,” she said. “It’s a kiddush Hashem (santification of God's name) to try and present myself as a normal, struggling, believing Jew who really does believe that a book written thousands of years ago and divinely inspired living can actually lead to repair of brokenness. I’m not the only one who thinks this, I promise.”

One might suppose that, given her hectic schedule, she might just be inclined to, on occasion, skip a visit or two to the mikvah. But that is not the case. “It’s something that is incredibly central. What is true for mikvah is true for a lot aspects of halacha,” she said. “You don’t have to like everything every single minute. You don’t have to find beauty and profundity in blessing food or waking up every morning. The fact is you put one foot in front of another and you keep coming back to some kind of foundation of gratefulness and tikva, of hope.”

When it comes to mikvah, it’s simply a matter of faith for Bialik. “Please, God, that it should be inspiring every month,” she said. “And when it’s not, you pray that next month it will be.”

This article originally appeared on the TimesofIsrael.com

You've Got a Friend: A True Story about the Power of Connection
It Takes A Lot Of Faith To Be An Atheist
How Instagram Brought Back This Nostalgic Soup
What Makes Eli Run?
Comments
MOST POPULAR IN Spirituality
Our privacy policy