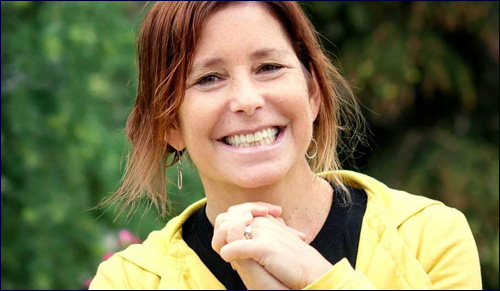 Amy Krouse Rosenthal’s moving plea for her husband to find love after her death.

Amy Krouse Rosenthal died last week. A short time before her death she wrote a profoundly moving essay, “You May Want to Marry My Husband” in the New York Times’ Modern Love column that created an unprecedented whirlwind of reaction.

The author, a prolific writer of children’s books who was diagnosed with ovarian cancer, chose an entirely different theme for what she called her Valentine’s Day message to her husband. After 26 years of what she acknowledges as an idyllic marriage, she wanted more than anything else to leave this world with the assurance that the husband she loved so dearly would find another partner worthy of his qualities.

So she wrote a love letter to extol her husband’s unique assets and abilities. She tells us how easy a man he is to fall in love with – because she did it just one day. She praises his gifts as a father; his kindness and compassion; his fantastic skill in the kitchen; his artistic talent; his romantic nature - and with that all his incredible good looks. She shares with us how much she would have loved the next 26 years with him. But since she knows her days are numbered she concludes: “I am wrapping this up on Valentine’s Day, and the most genuine, non-vase-oriented gift I can hope for is that the right person reads this, finds Jason, and another love story begins.”

It was heart wrenching to read. Even more so, to know that Amy’s death shortly followed. But what I think is the takeaway message from this remarkable story is something that I as a Rabbi have often tried to communicate – a message often difficult to absorb but deeply important in the lives of people forced to cope with the aftermath of tragedy.

Losing a loved one is an experience beyond compare. The Talmud recognized that “a husband chiefly dies only for his wife, a wife only for her husband.” Those who try to offer comfort by claiming they understand the mourner’s pain are untruthful as well as insensitive. The agony of loss for a beloved partner in life simply has no parallel.

And yet Jewish law has a remarkable demand upon the conclusion of the seven-day shiva period. With the close of the intense time of mourning, those who rise from their grief are to step outside and walk around the block – symbolically expressing the idea that life must go on and it is their duty to rejoin the living.

The greatest gift we owe to those who truly loved us is to find the happiness they would surely have wanted for us.

The Torah tells us that when Abraham lost his beloved wife Sarah he eulogized her and he wept over her. He recalled her beauty – both external and internal. He remembered that she was always at his side, when he invited guests to his tent and when he taught the truth of monotheism to nonbelievers. He paid an exorbitant sum to have her buried in the most special place on earth, according to tradition the cave of the final resting place for Adam and Eve.

And then the Torah tells us an amazing follow-up to the story. Abraham remarried. He had more children. Somehow Abraham knew that his life was not meant to be over as long as God gave him more years to live.

It is important to note that Abraham did not consider his subsequent remarriage in any sense a diminution of his previous relationship with the matriarch of our people. Sarah remains forevermore the esteemed and noble figure of our ancestry. But Abraham demonstrated by taking a wife after the loss of the love of his youth that he understood God’s decree from the time of creation that “it is not good for man to remain alone” – that human beings need companionship and that joy can only come about when the world is shared by four eyes rather than two.

I can think of nothing more noble than Amy Rosenthal’s public declaration of her desire for her husband’s happiness, to whatever extent possible, after her demise. Those who were critical of her essay and those who feel that true love ought to exclude the possibility for meaningful existence after its passing should find meaning from the life of Abraham - and keep faith, as Amy Rosenthal did, in life offering different, new and fulfilling blessings.

Death of a loved one should not move survivors to choose personal death as well. Indeed, the greatest gift we owe to those who truly loved us is to find the happiness they would surely have wanted for us.