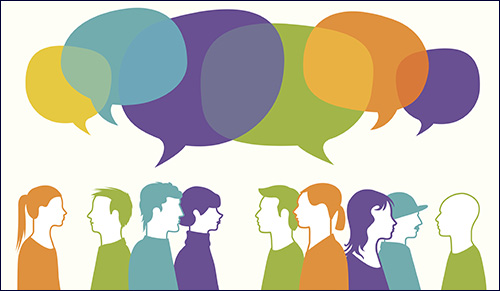 Men whatever you do, never tell your wife that her clothes look, or her food tastes “fine.”

In Part I, we looked at those “little” things that divide men and women. Despite any psychobabble hogwash, trust me, these gender differences are in the DNA, so unless you’ve cracked some secret code, men and woman are not the same. After having been married for over 30 years, with a son and a brother, you learn a little something about the sexes. Not only are our hormones different, we’re wired differently for sound. We think we speak same language. We don’t.

Before you pelt me with PC pamphlets, unlike sitcoms, I do not believe in the “Men-Are-Too-Stupid-To-Live” stereotype. I adore the male. I was blessed with a gifted, loving father, and have known and worked with remarkable men … even if they didn’t want to spend an hour watching me act out the antics of the vilda chaya with 30 bottles of diet soda and matzo ball soup on the “Ten items” check-out counter, or listen to my hour treatise on why I cry during “Terms of Endearment”.

It’s biology. Most males are not tuned-in to the female’s talents for circular, continuous debate; understanding why we adore chick flicks like “Thelma and Louise,” need a companion to go to a restaurant bathroom, or why when they just split checks, we suddenly become The Department of the Treasury. (“Okay, I had the tuna melt ... that’s $3.48; Rachel had the diet seltzer and the pickle ... $1.36. Bambi had the 4 vodkas ... that’s 8.15.-= 12.99. We can split the penny 4 ways”).

So, once again, mamalas, I wrote a few of these differences. If I’m wrong, it might at least account for why the deli man puts at least two papers in between my pastrami when weighing.

TOTAL TRUTH:
FEMALE:
“So, Irving. Where exactly did you go for lunch today?”
MALE: “Esther, with such a day, do you expect me to remember? Maybe I ate in. Or out.”
ANALYSIS: Women see truth in two colors: black or white. (Now, that doesn’t mean we never exaggerate or bend the truth a bissel. The difference is we know we’re “bending.” We say to ourselves, “God don’t punish me, but I told Irving my sister can stand him, when she really said, ‘OK, I can stand your Irving – on Pesach.’” The male, on the other hand generally has more shades of truth than Dutch Boy. I call it “Crayola-Truth.” However, they don’t think of it as lying. No. They omit, delete, or forgot because they claim it’s a “minor detail.” For a female, a “minor detail” is say, forgetting to mention his good shirt is at the cleaners. For a male, it could be forgetting to mention his entire family is flying in for Pesach. Watch:

(The day before Pesach):
Irving: “Oh by the way Esther, did I mention we should set more places for Pesach?”
Esther: “Who, and how many?”
Irving: “Em … my cousins, the Luftmentches are all coming … maybe 27.”
Esther: “Wha!? Why didn’t you tell me?!”
Irving: (SWEATING) “Listen, so I ‘forgot?’ What’s a few more people? A minor detail, right?”

KETCHUP KONNECTION:
FEMALE:
“Irving darling … I have another bottle of Heinz – from Costco. We also have 50 packets in a baggie, so I threw out the five empty bottles you put upside down in the fridge.”
MALE: “You did what?! Esther they were not empty – altogether. If you had patience and let them drip, we could consolidate and we’d have enough for spaghetti.”
ANALYSIS: True, we women will stash stuff in packets. Tying them all up in a baggie makes sense to a person in case of ketchup emergency. But waiting to get the last drop from five upside down bottles? First, by the time that happens, we’ll all be living in New Israel – on Mars. (Show me one person who ever got the-very-last drop.) Yet many males consider tossing a bottle with a milliliter of red a wasteful shanda, and the throwee, a spendthrift. In more extreme cases they’re waiting for a universal ketchup shortage, and will they clean up?! Of course some are working on this as a project in a sanitarium, next to their lanyards on which they’ll also make a killing.

APPEARANCE 1: WEIGHT
FEMALE:
“Listen Irving, I didn’t want to mention, but maybe I should as I care about your health. You’ve gained a few pounds, figure 30 over the last few years.”
MALE: “You’re meshugge Esther! I just measured yesterday and I’m the same around as I was when we got married!”
ANALYSIS: True, he measured. Around his knees. For many females a weight gain of five pounds has us running (OK, shuffling), bending, and eating seaweed. The average male, however, looks in the mirror and sees Prince Charmingsky. The fact that his belt has gone up five sizes is, he will explain in great political detail, a plot by the garment manufacturing industry who make up new sizes to corner the belt market which is part of the great clothing conspiracy against the Jews.

APPEARANCE 2: HAIR
FEMALE: “So Irving … you’re losing a little hair. Big deal. Will you stop already with the chemicals, and wrapping onion and garlic juice around your head! I feel like I’m sleeping with a leftover brisket! More, those chemicals you turned in your IRA to buy made your feet swell like cantaloupes.”
MALE: “AHA! So you think I’m bald too! Esther tell me. Has my hairline receded since yesterday? Look. No. Get the magnifying glass! Could it be my forehead is increasing?! I read things get bigger as you age?!”
ANALYSIS: True, we women want nice, shiny hair and will get a convenient, attractive cut that suits us and is natural looking (if we’re over 40). Many sane, competent men, however, will not only geshrei should they see a “thinning,” but try to “fix” it by:

All of this is why, in addition to a sign of deep respect, the yarmulke should always be worn as a fashion statement.

“FINE”:
FEMALE: “So Irving, I slaved like a dog over this brisket, wasn’t it delicious?”
MALE: “It was fine, Esther.”
ANALYSIS: If there’s one word most women loathe, it’s when a man says “fine” about us. To the male, “fine” is a safe word. It’s not too dramatic in case they’re not sure what you’re asking. For example, if we hate our hair cut, and he says, “Nice” – this is not a good thing. To a female, “fine” is used when the plumber installs a new sump pump and says: “Lady, you want it here?” We say “Fine.” If we’re in the hospital and the nurse fluffs our pillow, “fine” is also okay. But when we’ve just prepared a 12 course meal or had a complete make-over and a male says “fine,” it means we don’t have spinach hanging from our teeth or are trailing bathroom tissue on the heel of our shoe. Trust me. It’s much better to risk it. The words “gorgeous,” “beautiful,” “stunning,” “WOW” and “There never was, nor will there ever be, a brisket as succulent as the one you made” are acceptable.

Should you have your own faves, by all means add to this list and share in comments below. All answers are … fine.