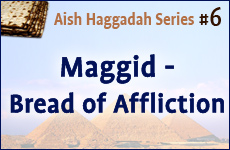 "This is the bread of affliction that our ancestors ate in the land of Egypt."

We raise the matzah to announce that we are going to re-live the experience of the Jews in Egypt. Try to imagine: What was it like being a slave in Egypt?

Matzah represents two things: the food of our slavery, and the food we ate in our haste to leave Egypt. The Haggadah begins by referring to matzah as "the bread of affliction" – the food of slavery.

Why does "food" recall the slavery experience? Of all that is bad about servitude, lack of ability to travel, harsh treatment, and lack of privacy would all seem to be worse problems than food. When recalling slavery in 19th century America, do we usually focus on the fact they had terrible food?! How can we as Jews, who know what it means to suffer, point to matzah and say, "That's how bad Egypt was"?

Furthermore, it is surprising that the Egyptians fed the Jews matzah. Matzah was more difficult for the Egyptians to make. Flour and water will naturally rise to make bread if you leave it but a few minutes. If the Egyptians gave the Jews matzah to eat – as opposed to bread – it was because they made a conscious effort to do so.

Furthermore, slaves are valuable as a work force, and a worker is only as good as the food he eats. His food needs to be nourishing if he is to stay healthy and strong. But matzah does not seem to fit this bill. Clearly, if a slave is being fed matzah, it is because the master does not the slave to be strong – he only wants the slave to survive.

SURVIVAL FOR THE SAKE OF SURVIVAL?

The job of the Jews in Egypt was to build storehouses. Storehouses store grain. Grain makes matzah. The Jews ate the matzah so they could work. Their work was building storehouses.... The cycle of production and consumption had no ultimate goal. The oppression of Egypt was meaninglessness.

A human being can endure all manners of suffering if he believes there is some meaning to it. If he appreciates the true meaning of life and focuses on life's ultimate purpose, then he can even survive the Holocaust.

But what about the person who has no real purpose for living? What if he instead invents some "make-believe" purpose? In that case, all shades of delusion are possible, none more sensible than any other. That is why we see some people living to collect beer bottles, some to hit a baseball the farthest, and some to dine at Europe's finest restaurants. The simplest "purpose" is to live for a good meal. That's called "living to eat." And typically, that is the lifestyle of a slave. Can anything be more crushing than the realization that one's whole existence is only to feed the body?

This is what the Egyptians wished to make out of the Jews.

But the Egyptian plan backfired. Because it was that very matzah that kept the Jews focused and clear. When the slave's food is as tasteless as matzah, he can have no delusions of purpose. He knows he is not living for the pleasure of eating, only for the energy that food gives him.

What about our lives today and the "tasty food" we consume? That taste comes in many forms – not only a good meal, but also a fancy car and a promising career. In essence, we may not be living for anything more meaningful than does the slave. The slave merely finds it harder to delude himself into believing he is living for a greater purpose, since he lacks the distractions of tasty food.

The Haggadah poses the question: Could we survive on matzah all year round – or do we need "taste" to keep a delusion alive?

This is the bread of affliction that our ancestors ate in the land of Egypt.

We see right at the start that matzah is the central symbol of Passover. Why? Most people would say because the Jews were rushed out of Egypt so fast that the bread didn't have time to rise. The Torah even says that the Egyptians pushed the Jews out quickly.

Because matzah was already a symbol, and rushing out the next morning was a continuation of that symbol.

First, let's understand why matzah is the central lesson of Passover. Matzah is the most simple, essential form of bread you can have. If you let 18 minutes pass when you're kneading a dough, or if you add yeast to dough, then it starts to leaven – i.e. it puffs up.

This puffing up – the rising which the yeast produces – symbolizes a person's own inflation with himself. A central concept of freedom is "pulling back from the ego." Of course this doesn't mean you should never have ego – because we know that the rest of the year we are allowed to eat regular bread! But Passover provides a point where we get back to basics, to what we really want without all the additives and superficialities.

On the other hand, what if the cars take on such importance that when your child gets a little mud on the car you go berserk. If we feel that the additives and superficialities are essential to our lives, then that obscures everything. Our ego gets in the way and we lose sight of what really counts.

Passover is all about breaking free of that. Matzah says you've got to get back to essentials. Focus on what really counts.

Jewish tradition says to burn your remaining chametz on the morning before the Seder. Some people have the custom to write down a list of their character flaws and throw it into the flames. The idea is that on Passover, we want to completely rid ourselves of all "chametz," to move beyond our ego and to be rid of that confinement forever.

Why is Maggid – telling the exodus story – one of the 15 steps to freedom?

The Sages tell us that the ability of human beings over other species is the power of speech. Speech is the tool of building and construction. God used it to create the world. ("And God said: Let there be light.") Betzalel's ability to construct the Tabernacle came through understanding how God combined letters to create the world. And the Kabbalists used letter combinations to create the golem.

On Seder night, we use our gift of speech for the central part of the Haggadah: telling the Passover story. The very word "Passover" is a contraction of the words Peh Sach, meaning "the mouth speaks." The Hebrew name for Pharaoh, on the other hand, is a combination of Peh Rah, meaning "the bad mouth." For just as speech has the power to build, it also has the power to destroy. Gossip and slander drive apart families and communities.

On Passover, we use speech to "build" humanity – by communicating, connecting, and encouraging each other. We stay up long into the night, relating the story of our Exodus, tasting and sharing the joy of freedom.

The "Maggid" portion of the Seder is when we read and discuss the text of the Haggadah.

Would it really be such a big deal if parents never taught their children to say "thank you"? Obviously it would be, because if you don't say thank you, you're an ingrate. And just like no one wants to be an ingrate, no one wants to marry one, be friends with one, or raise one. Thus, the "magic words" – thank you.

The Hebrew word for "thank you" is todah, which also means to admit. When we say "thank you" we are making an admission. We admit that we needed someone else. You passed me the salt, helped me in business, changed my tire, or raised me as a child. To say thank you means to admit that "I couldn't have done it without you."

Beneath it all, when we express our gratitude, be it to man or God, we are recognizing our dependence on another. And though that dependence is never easy to admit, when graciously acknowledged, it facilitates harmony, bonding, and freedom.

The Haggadah narrative is meant to sensitize us to one of life's most basic traits of self-liberation. Gratitude. The textual flow follows a pattern known as "opening with the ignominious and concluding with the praiseworthy." It is for this reason that the Haggadah begins by highlighting the less-than-flattering origins of the Jewish people ("We were slaves to Pharaoh in Egypt.... Our forefathers were idol worshippers...) and concludes with our triumphant liberation and the formation of a relationship with God.

What is on the Passover Seder Plate?

Baruch Hamakom
Vayelech 5783: Regret and Repent
Rabbi Sacks: Focus On the Important, Not the Urgent
Put Your Foot Down: Are Human Feet Poorly Designed?
Comments
MOST POPULAR IN Passover
Our privacy policy
Aish.com Is Looking for Great Writers