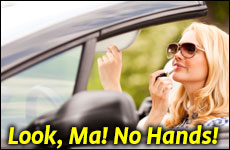 Google has invented the self driving car. Wait, so whose picture is on the license?

We live in exciting times. According to recent news reports, the California DMV recently gave Google a license to test their self-driving cars on the road.

Self-driving? Then whose picture is on the license?

This would be amazing for driving your kids’ carpools!

Self-driving cars are definitely the wave of the future. I’m not sure why your car needs to go somewhere that you’re not going, though, but it would probably be great for driving your kids’ carpools. We just have to train it to say, “Stop spitting back there!” Or it can drop you off at a wedding and go look for parking.

Google says that the cars would actually be safer than traditional cars, because they won’t drive tired, or with road rage, or while eating a sandwich with both hands.

Think about it: What’s the main cause of accidents? Drivers! That’s some solid thinking right there. When was the last time you heard of a car getting into an accident without a driver? Almost never. And I say “almost”, because there was one story in the news about a couple in Missouri that ran out of gas, so they decided to get out and push their car to the gas station at the bottom of a hill, and it kind of got away from them and went right through the gas station’s convenience store. So almost never.

Nevertheless, the driverless car is still in testing stages. California is the third state to allow this, the other two states being Nevada and Florida (no kidding). Also, state regulations currently require two people to be in the car at all times. One person sits behind the wheel, ready to grab it if anything goes wrong, and an engineer sits in the passenger seat, monitoring the car’s software on a little screen. This is as opposed to a traditional, non-driverless car, which generally only has one driver, and usually not even a whole driver. There’s a guy sitting there, but even he’s not fully aware. The only drivers paying full attention to the road are the ones complaining about the drivers around them. So in other words, driverless cars are much safer, but it’s mainly because there are two drivers plus a computer calling the shots.

And Google isn’t the only company having cars bring themselves into the future. A company in Germany is currently developing a car that a driver can steer with his eyes. This frees up his hands to do whatever it is he needs to do while driving, such as play with the radio. Okay, so he can’t do that, because he still needs his eyes to drive. But he can definitely do things he doesn’t need his eyes for, such as scratch his feet. He can attack his feet with both hands, so long as he keeps his eyes on the road.

Anyway, they plan on putting this car into production as soon as they have all the kinks worked out. I wouldn’t worry. What’s the worst that can happen?

Okay, so you’ll have to stop rubbernecking at accidents. You also can no longer discipline your kids in the back seat. And if you’re driving on mountain roads, you don’t want to look at the view.

Q: What if the driver dozes off? Or what if he blinks?

A: Actually, the car automatically stops when you close your eyes. So, for example, if you come to a red light, you have to close your eyes to stop the car, and then try to guess when the light has turned green again, based on the honking.

Q: But what if one of the passengers looks at the windshield? And what if everyone in the car is looking in a different direction?

A: They’ve fixed that problem too. In order to steer the car, the driver has to wear a modified bicycle helmet, so the car knows whose eyes to follow. So if you get this particular car, you’ll be sure to look really cool, driving around and scratching your feet with a bike helmet on.

Those silly Germans. What will they think of next?

Now before I get a bunch of stern letters sticking up for the poor German scientists, I want to point out that I am not actually hurting anyone. In fact, humor columnists throughout the ages have always made harmless jokes about technology. Let’s go back in time and take a look:

So I hear that Volvo just patented something called a “seat belt”. Apparently, it keeps your pants up, but only if you’re sitting in a car.

No, I’m just kidding. It’s supposed to keep you in your seat while you’re driving. Because otherwise you’ll just wander away, apparently. Maybe we should start putting them on the seats in my classroom so my students will stop getting up.

Seriously, what is this obsession with safety nowadays?

Seriously, what is this obsession with safety nowadays? When I was growing up, we just roamed around in the back seat, and when my father wanted us to be quiet, he would hit the brakes, and we would all SLAM into the back of his bench. We had no seat belts, and we all turned out just fine, except that I no longer finish all of my…

This is Not a Crank

So Ford just came out with a car that doesn’t have a crank on the front. No crank? How are we supposed to wind it up in the morning? With a key?

Apparently, the car can do all this because it runs on gasoline. Gasoline! Why don’t we just run our cars on dynamite, while we’re at it? We’ll just attach a few sticks to the back of the car, and hope we don’t have to make any sudden turns!

Also, when are they going to invent brakes?

Where Does One Stick the Carrots?

A Comedy (in that all are still alive at the end):

So I hear from the newsie on the corner that they’re inventing a new kind of cart. I get all my news from the newsie – but not by purchasing a paper, mind you. I’ve discovered that if I stick around long enough, he eventually screams out the entire contents of the paper, including Ziggy. (That Ziggy is a delight! And what a marvelous head of hair he has!)

Anyway, it seems that the Germans are coming out with something called a “horseless carriage”, or “car” for short.

Q: Horseless? So it’s not going to move?

A: Apparently, it will move by itself. At least downhill.

But my question is this: Does it have to be horseless? My horses have become part of the family; I don’t want to lay them off. Perhaps they can sit in the cab with me.

Q: What if the car breaks down? Do we take it to the side of the road and shoot it? Also, how is one supposed to make it go faster? There’s nothing to whip!

A: Perhaps you’re supposed to whip the car in front of you. Personally, though, I’ve never whipped my horse to make it go faster. It feels mean.