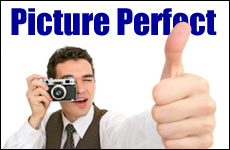 In today’s digital world, how exactly do professional photo studios stay in business?

With all the advancements in technology these days, I am frankly surprised that we still have professional photo studios. Nowadays you can buy a camera that, despite being no larger than a piece of toast, can take quality digital pictures that we can even edit ourselves to add color and take out the footprint in the background from the time someone tried to learn how to somersault and misjudged the distance to the wall.

Why are women so into taking pictures of their kids in matching outfits?

In fact, left to my own devices, I would have assumed that that photo studios had vanished altogether, except that periodically my wife makes an appointment to have our kids’ picture taken. Women are very into dressing their kids up in matching outfits and doing everyone’s hair and, at the last minute, washing the kids’ faces with spit. If a man would take his kids in for photos, which he would never do on his own, most of the kids would have food on their faces, everyone’s hair would be a mess, and at least one child would be missing a shoe.

But there is still a place in society professional photos, because there are some things that you just don’t get with amateur snapshots. For example, sometimes you don’t even get a photo, because you left the camera at home. And if you do remember the camera, we forget the film. Technology tried to fix that by creating digital cameras, but now we just forget the batteries, because batteries in a digital camera have about as short a lifespan as a kite in a jet engine. So most spontaneous amateur pictures involve everyone huddled together, smiling and sharing aromas, while the photographer spends ten minutes searching through her pocketbook and going, “I don’t understand! I put batteries in just this morning!” So most of the time we just take pictures with our phones.

But we never get around, when all is said and done, to actually taking the pictures out of the phone. Looking at pictures used to be a nice Shabbos activity; but these days it involves the very same people huddling around the phone and squinting. At least with professional photos you get hard copies of the picture, even though you’re never going to remember to buy a frame.

The main problem with professional photos, though, is that you’re paying a lot of money, and your kids don’t even smile. Sure, with older kids, you can bribe them. (“If you smile and keep your clothes clean until after the picture, we’ll give you chocolate!”) But the little ones still don’t smile. We spend their whole lives telling them not to interact with strangers, but see that guy with the camera? He’s okay. Honestly. We don’t know him either, but he’s wearing a nametag! Maybe it’s only okay because there’s candy involved.

Another issue with professional pictures is the wait time. My son, Daniel, was the kind of baby who spit up more than he ate, so when we took him for his first photo session, at three months, we specifically made his appointment right before lunchtime, hoping that by then he would have expelled everything that he was going to expel from breakfast. But then we had to wait an hour and a half, and he was very hungry, so yes, we fed him. And by the time it was his turn, he was perfectly happy again, vomiting all over the backdrop, his clothes, our arms that kept darting into the picture to clean things up, etc. In the final picture, which we have hanging in our living room, he is down to his undershirt. Also, he is lying on his stomach, so that you can’t see what he did to the front of the undershirt.

A third issue with professional photos is that you have to spring for packages. The studios make up a certain number of pictures that they think people want, and the total is a pretty big number for the price, so you say, “Hey, that’s a great price for 72 photos!” Except that, in reality, it’s only like three pieces of photo paper, so in order to fit them in, they had to make 24 wallet photos and 16 locket photos. I don’t even know 16 people who have lockets. And then you send the wallet photos to everyone you can think of, none of whom are as happy to receive your photos as you are to give it to them.

Also, homemade pictures come with memories -- “Hey, remember the time we went to the park and someone actually remembered to bring the camera?” But when you look at a studio photo, what memories do you have? “Remember the time we stood in front of that backdrop? Remember how we sat in the waiting room for two hours, and everyone was tired and cranky, all so we could get 32 tiny photos that we’re still trying to pawn off on our friends and relatives? Boy, were we starving!”

Also, photo studios aren’t really set up for observant families. I remember the very last time my parents took us for photos -- my mother walked in with me and four siblings, and the photographer was like, “Oh my goodness! Are those all yours?” And my mother said, “No, my husband is coming with two more.” I thought the photographer was going to cry. She couldn’t stand far back enough to get us all into the photo. The end result was a picture in which there are 7 faces crammed into a tiny space. There are no outfits visible -- just a big mass of faces, and some of those faces are partially covered by other faces. And you can’t make out anything in the locket pictures. So now, when my parents want a family photo, they just make a wedding.

Wedding picture aren’t much better, but at least they come with better memories. “Hey, remember that time we went to a wedding, and we got up for pictures and spent two hours standing in various poses and then when we came back our food was gone? Boy, were we starving!”

As The Tsouris Turns