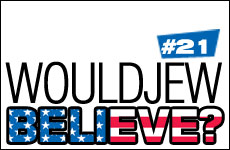 Archaeologists have made a giant discovery in Tel Tzafit, once the city of Gat (also called Gath), Goliath’s home town! And the excitement is building as their findings continue to bring the Bible to life. Artifacts from metal craft and bronze, along with demolished buildings confirm King Chazel of Aram’s destruction of the once great city, which was inhabited at different times by the Philistines, and the nation of Israel. Though enemies, there was “crossover” between the two cultures. In fact, the Bible tells us that Samson married a Philistine woman. Most interesting? Writings from the period show that the name “Goliath” (with variations) was a hit in Gat! Yes, if you passed through the city back then looking for the mighty man, you’d get “Which Goliath?” in Gat. (Got that?)

The Talk King is set to become the Bagel King!

In case you’re worried about Larry King’s future when he gives up the microphone ... don’t be.

The Talk King is set to become the Bagel King! He’s now a partner in the Original Brooklyn Water Bagel Co. In case, like me, you’ve never heard of OBWB, the Florida company claims to have created a water treatment technology that replicates — are you ready? – Brooklyn water! As we all know, for a bagel to rise to the top, Brooklyn H2O is bottom-line. The company is determined to grab shelf space next to Lenders in every freezer in the U.S. So yes. Whether you live in Prospect Park or Podunk, you’ll get “the real thing.”

And while we’re on the subject ... the “King” just may be too late for New Yorkers who are “outscooping” their bagels. WouldJew Believe, more and more carb-counters are demanding the doughy mmmmm inside be scooped out! Oy vey! How the poor bagel is suffering at the hands of skinny New Yorkers who are removing its very kishkes and leaving only the crusty carcass. The meshugge practice even has a name: “Scooped out” which I personally think should be changed to “Creeped Out.”

Here’s a controversial one. Holland is starting to use “decoy Jews” – undercover police wearing yarmulkes and other religious attire to uncover and stamp out anti-Semitic attacks in Amsterdam. The new strategy was the brainchild of Moroccan-born Parliament member, Ahmed Marcouch, after an incident involving Moroccan immigrants harassing a rabbi and children on the streets of Amsterdam. And Mayor Lodewijk Asscher is in full agreement, claiming that hate crimes against Jews are on the rise in the city and all must be done to “keep this phenomenon from growing.” “Decoys” or what we think of as going “undercover” is routinely used to counter other hate crimes. For example, police posing as frail, “grannies” has helped lower street crime. But cops in kippahs is a first – probably anywhere. Blasphemous or bold? Disrespectful or daring? Sacrilegious or savvy? Does the motive outweigh the method? You be the judge.

AND SPEAKING OF HATE CRIMES

One of the latest victim categories in Toronto, Canada is … are you ready? The "non-Jewish Shiksa." The term showed up in the latest hate crime study done by the Toronto Police Service. The Canadian Jewish Congress (CJC), which advocates for stronger hate crime laws, is definitely not pleased, calling this new class of victim “absurd." This gantseh megillah raises a few thorny questions: First, what exactly constitutes a “victim group?” And, what is the meaning of “shiksa” in today’s world? In media, it’s become kitchy slang. For example, Sharon Stone described herself as "the ultimate shiksa" in Basic Instinct, Sex and the City’s Charlotte was similarly described as a "shiksa goddess," and on Seinfeld, George explained Elaine’s “shiksa-appeal.”

“Non-Jewish Shiksas” a “victim group?” Call me when you see, “GO BACK TO SWEDEN, YOU BLOND, BLUE-EYED BEAUTY” scribbled on a construction site wall!

The tension mounted in the village of al-Fanar – site of failure or triumph! As the war played out, on-lookers knew the two groups were fighting for more than a title, more than the 12 tons of the precious substance they had created. Yes they (well, at least one side) were fighting for turf as they have for years. It was Israel vs. Lebanon once again this year, vying for gastronomic dominance in “Battle Hummus! The honor went to the Lebanese, whose 300 chefs whipped up 11.5 tons of the shared Middle Eastern delight, breaking the previous record set in January in the Arab-Israeli village of Abu Gosh. To get a sense of size, the ingredients which included 2 tons of tahini, 2 tons of lemon juice, and 154 lbs of olive oil – are equal to over 11 average family cars!

Ah, but the debate over “ownership” continues, as the Lebanese claim rights of “origin,” and have been seeking approval from the European Union to register hummus as a national dish, much like the Greeks and feta cheese. And their fight is more than glory. The Lebanese say that Israeli hummus, which they claim is based upon Lebanese recipes, is hurting their market share of the chick pea concoction worth $1 billion, globally.

But this cold war may actually be warming individual Israeli-Arab relations. Go to any good hummus restaurant in the region, and you’ll find Israelis, Muslims, Jews and Palestinians sharing a table. One way to peace? Who knows? To quote the credo of Israeli, Shooky Galili, whose blog is devoted to all thing hummus: “Give chickpeas a chance."

It was 71 years ago, in July of 1939, that Frank Sinatra released his first commercial record "From the Bottom of My Heart" with the Harry James band.

“So nu?” you may ask. “What does Sinatra, one of the most controversial, and powerful men in show business have to do with the Jews?"

Plenty. The Italian Catholic, who died in 1998, was a powerful friend to the Jewish people and the State of Israel. Throughout his life, and regardless of other questionable behavior, he nevertheless was committed to fighting anti-Semitism and to activism on behalf of Israel. In 1947, when big names were needed to rouse America into saving Europe's remaining Jews, he sang at an "Action for Palestine” rally. He also sat on the board of trustees of the Simon Wiesenthal Center, and donated over $1 million to Jerusalem’s Hebrew University (which was tragically bombed by terrorists in 2002, killing nine people).

As the result, his movies and records were banned in some Arab countries. There are many personal stories as well of Sinatra’s sacrifices for the Jewish people. Writer Sidney Zion, a well-known Broadway figure, was dining with Sinatra and mentioned he had trouble getting a minyan to say Kaddish for his father who had recently passed away. The next day, a limo pulled up at the synagogue and Ol’ Blue Eyes and his friend, Father Rooney, donned yarmulkes and joined the congregation for evening services. Religiously acceptable? For sure not. But it was typical of his unwavering support and affection for We Jews, personally and publicly.