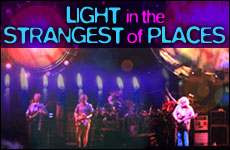 by Batsheva Hirschman Frankel
May 9, 2009

At a Grateful Dead concert one Chanukah, I felt like the only Jew in the world. Then an amazing thing happened.

I had been spending Shabbat after Shabbat with Jonathan and Julie and we'd become close friends. Then one Shabbat lunch, Jonathan asked me out of the blue: "You've been enjoying Shabbat meals with our group for so long now, but I don't think I've ever asked: How did you find your way here?"

So I told him this story.

About a year and a half previous, it was Chanukah, and to my delight, The Grateful Dead were playing four shows in a row, two of which coincided with nights of Chanukah.

I took my candles and menorah to the "Dead show" so I could at least light them in the parking lot before going into the concert.

At the time, I didn't feel very connected to Judaism or the Jewish community. Even so, when I went to the "Dead show", I took my candles and menorah with me so I could at least light them in the parking lot before going into the concert. My non-Jewish friends were bemused, mostly because of the chocolate gelt and dreidels I brought. But they didn't really share in my "celebration." I felt very alone and sad, like I was the only Jew in the world. But later that night an amazing thing happened.

Between the band's first and second set, I was walking around the arena, when someone handed me a piece of paper. I looked down to see a picture of the Grateful Dead icon skeleton wearing a kippah and lighting a menorah! Written on it were the words to one of my favorite songs:

I glimpsed again at my little flyer and reflected on its meaning. The message seemed so clear to me. Chanukah comes around during the darkest part of the year. And it is during this intense darkness that Chanukah tells us to always have hope, just as the lights of our menorahs break through the bleakness of the dark. When we gaze at the flames, growing brighter each night, we sense not only the miracles that occurred for our ancestors, but also the miracles that we experience in our lives today. No matter how down or stuck we feel, or even how disconnected we seem, we should never give up or despair -- because we can find the light even in the "strangest of places" -- if we keep our eyes and hearts open.

I broke away from my intense thoughts, trying to locate the guy who handed me the paper. I wanted to express my gratitude. Was that him walking away? He glanced back at me for a moment that seemed much longer, and all I saw was this big, sweet Cheshire-cat kind of grin as he disappeared in the crowd.

Suddenly, I felt so connected and special. Who was this Chanukah messenger who made me feel a part of the Jewish people again?

A few months later, my friend, Janeen, dragged me kicking and screaming (okay, maybe just kicking) to a Shabbat dinner at her friend Stuie's apartment. The thought of spending a Friday night with a bunch of "religious" Jews didn't sound so great to me at the time. Finally, she said the magic words, "Stuie's a Deadhead, too, you know."

"Hmmmm, alright," I thought, "one little dinner won't kill me."

What an unforgettable night! I knew I would have to come back again. Everyone was singing the most beautiful tunes. Even though I had never heard them before, I felt like I had always known them. And then there was this rabbi from San Francisco. I had never heard a rabbi speak so deeply, yet humorously at the same time. Afterward, I felt compelled to tell him about my special Chanukah experience. He laughed and asked my host, Stuie, to tell me how he and Stuie had met.

Stuie wanted to spread a Chanukah message to all the Jews at the Grateful Dead concert.

Stuie related a story of several years previous, at Chanukah, when he was in the Bay Area for some Grateful Dead shows. The band played the song, "Scarlet Begonias" and when they came to the line, "Once in while, you get shown the light, in the strangest of places, if you look at it right," he had an inspiration. He thought it was a perfect line for what Chanukah -- the "festival of lights" -- is all about.

Stuie had an idea to make a little flyer and spread this Chanukah message to all the Jews who might come to the concerts, but he wanted to put a reference phone number on it. So Stuie asked this particular rabbi if he could put the rabbi's number on it. Thus was the birth of not only their friendship, but the flyer that meant so very much to me. I couldn't believe that I was having the most awesome Shabbat dinner at the home of the very guy who conceived of that flyer!

The following Shabbat, I came back, even though my friend Janeen couldn't join me. And slowly I started to come more and more -- first once or twice a month and eventually, every week.

When I finished my story, I looked up at my friends. How could I have missed it? There in front of me was Jonathan sprouting that big Cheshire cat grin, as he said to me, "I'm the one who handed you that flyer." 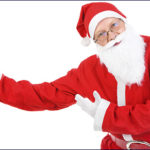 The Way We Were3 min read