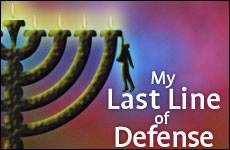 How Chanukah kept me Jewish when all else failed.

Growing up, there was not much about Judaism that I loved, or even liked for that matter. Passover was a bust (the Four Questions was the only acting gig I met that I didn't like), and don't get me started on Yom Kippur (can you say, "Starvation without meaning"?).

With my father making me miss high school football games and dances for something he called "Shabbos," you can pretty much guess how I felt about Judaism by age 16. Hated it!

But there was one Jewish thing that I connected with from the time I was a kid: Chanukah. I know it sounds so cliche to say that the only Jewish holiday a secular Jewish kid from Walnut Creek like me enjoyed was the one that occurred close to Christmas, but it's true. I've always loved Chanukah. In fact, it was Chanukah that probably saved me from giving up on Judaism all together.

As a kid, my house was not the place to be for the holidays. But Chanukah was different.

As a kid, my house was not the place to be for the holidays. Any holiday. There was always so much pressure to have the "perfect holiday" that usually everyone ended up very tense and unhappy by the day's end.

My father was always particularly tense around Rosh Hashana, but not without some justification. It was tough trying to get five little kids into the car so we could all get to temple on time to celebrate the festive New Year. But since we were always running late, (inevitably someone's shoe was missing or hair wasn't just right) we usually brought in the New Year in a manner that was, well, let's just say "less than festive." Yom Kippur was the same situation, different holiday, but with the added "wildcard" of a fast mixed in.

Thanksgiving did not fare much better either. The turkey always took longer than the "meat guy" at Safeway said it would (which led to us reliving the Yom Kippur fast), the yams weren't as good as the year before and the true pain of having to sit through yet another Detroit Lions football game on TV all added up to, well, not much fun.

And it wasn't because of the presents. Believe me, with five kids to shop for there weren't a lot of presents.

As a boy Chanukah had particular appeal because well -- let's face it -- Chanukah is a really good war story. It's like D-Day for the Jews. My father was a decorated B-25 pilot during WW II and I grew up hearing his war stories. They captivated me. The battles, the heroics, beating the odds, successfully completing the "mission impossible" -- my father had done it all. But he did it as a part of the United States Army.

Chanukah told the story how the Jewish Army overcame the odds and beat the stuffing out of the Syrian Greeks. The Chanukah story had everything dad's war stories had: battles, heroics, beating the odds and completing successfully the "mission impossible."

But Chanukah had something more: it had God. The story of Chanukah not only gave me a sense of a proud and even "tough" lineage as a kid, but it also taught me what my mom always told me: You can always rely on God to take care of you.

Every night after we lit the menorah, we'd sing Rock of Ages. Even as a kid, my eyes always welled up with tears when we sang the verse, "And Thy word broke their swords, when our own strength failed us." The thought that God, with just one of His words, could break an enemy's sword and defeat him for us was overwhelming to me. Somehow it got through to me that alone we're helpless, vulnerable, defeatable. But with God's help we can do anything, overcome anything, accomplish anything. Even when we believe we can't.

Who wants to stand out as "odd guy out" or worse as "Jewish Guy Out"? Not me.

Now that I am a religious adult, I see even more profundity in the Chanukah story. It's still a great war story, but now I also realize that it's a story about my own battles: first against Judaism when I was growing up, and now my present struggle to preserve Judaism within in my family.

Growing up, I was surrounded by the world of Walnut Creek, a world that encouraged me at every corner to assimilate into the general, American, Christian culture. As a kid I thought, "Well, that sounds good to me!" I mean who wants to stand out as "odd guy out" or worse as "Jewish Guy Out"? Not me. I was no Judah Maccabee. In fact I was just the opposite -- I was my own Syrian-Greek. I encouraged myself to assimilate as much as possible.

But just like with the Maccabees, God saved me from losing Judaism all together. The odds against this happening were great: all of Walnut Creek and secular culture versus God saving one Jewish soul. The Almighty had to come up with something good, something powerful. And He did. He gave me a holiday I could enjoy, something Jewish that I could cling to. He gave me Chanukah.

Having that allowed me to say, "Well, maybe I won't chuck all this Jewish stuff just yet. Maybe it's okay to be Jewish -- just a little bit." In the end, as in the story of Chanukah, God won. Judaism survived in me.

I realized that the battle has to be won because my wife and I, and our two little daughters are the last strong links to Judaism in both our families.

When you become religious in your 30's, however, you also face some pretty tough battles -- against yourself, against society, even against some well-meaning family members -- in order to preserve Judaism in your life and your family's life. Sometimes it seems that the battles are overwhelming and the enemies too much to handle.

But even in the face of all of that I realized that the battle has to be won because my wife and I, and our two little daughters are the last strong links to Judaism in both our families. We're the last line of defense.

So during the tough times, I think back to that verse in Rock of Ages and remember that God can help us overcome anything, that He can help us save Judaism in our lives just as he helped the Maccabees so many years ago. My eyes still well up with tears when I think of that verse or sing it.

Chanukah reminds me that God is always there for us, and that if we just allow Him to help us fight our battles -- whatever those battles may be -- His word will indeed break our enemy's sword. Maybe it's that powerful reminder of God's love for us that makes Chanukah my favorite holiday. And maybe it's that powerful message of God's love for us that kept me from abandoning Judaism during all those years I was so far from it.

Feeling Like I'm the Only Jewish Girl in the World
Why Are The Prayers Of Yom Kipur So Repetetive?
Ha'azinu 5783: A Time for Unity!
Twisted Thinking
Comments