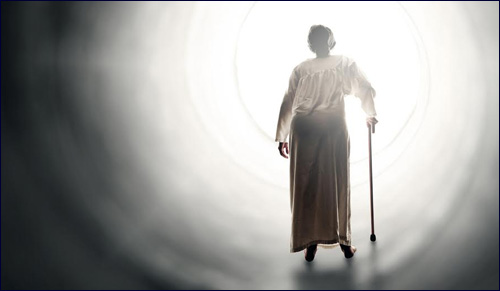 My mother chose to meet death in her own way.

As a trauma psychologist who has dealt intimately with death and dying for the better part of four decades, my opportunity to finally talk about death – in real time – with my own mother arrived after a long year of battling a chronic and life threatening illness. But she didn't want to talk.

As I lay in the bed next to her, holding her hand, on one of the last Shabbat mornings of her life, I told her what a wonderful mother she had always been, something I didn't say often enough during these past 62 years. Then I added, "Mom, now is the time to tell me all the things you never told me." A deafening silence met my words. I looked over to see if she had fallen asleep and though her eyes were closed, I could tell that she was listening. She was just silent.

My mom was one month short of her 91st birthday. Swimming daily well into her 90th year, attending study groups and concerts, even dancing at weddings, Mom had such a zest for life that it was hard for her to let go – and even harder for her to talk about death.

She chose to meet death in her own way. She stopped eating a few days before Sunday, the day her newest great grandson – my son’s son – was born. Sitting in her armchair for, unbeknownst to us for the last time, she smiled and said, “Mazal tov!” when she heard the good news. By then, she had begun subsisting on liquid nourishment with a special penchant for the Ben and Jerry's chocolate milkshakes I made for her. We focused, with the support of the wonderful home hospice team, on making her last days comfortable without unnecessary medical intervention. We understood where we were headed and in agreement among ourselves and consultation with our rabbi we decided heroic efforts were out of the question.

Against all odds, she was hanging on and didn't seem ready to die.

On Wednesday morning, she stopped drinking and did not get out of bed. She became less and less communicative, and the home hospice team made it clear that her hours were numbered. We watched as she continued to breathe, her chest rising and falling, and we stayed close by, singing her favorite songs, talking to her, and praying for an easy passage.

The hours passed. Sunrise, sunset. Thursday. Friday. Shabbat. Each day, each hour, seemed that it would be her last. Against all odds, she was hanging on and didn't seem ready to die. By Sunday morning, her breathing was quite slow, each breath punctuated with a long pause.

Meanwhile, my new grandson’s bris was scheduled for 10 AM in a neighboring town. My sister-in-law volunteered to stay with Mom so that the rest of us could attend this joyous occasion at such a bittersweet moment. The baby was given his name: Zohar Chai. Chai, meaning "life", was in honor of my mother, whose name was Chaya. My father called my sister-in-law to check in with her and told her the baby's name. My sister-in law bent down to whisper the name in Mom’s ear. My mother took one more breath. And then, her soul departed.

Allowing my mother the dignity to die at home, surrounded by her children and her husband of 67 years, was a blessing.

Allowing my mother the dignity to die at home in her own bed, surrounded in her last days by her four children and her husband of 67 years, was a blessing. The support of a caring and experienced home hospice team enabled us to avoid putting my mother through terrible trials and tribulations before dying in the impersonal, clinical surroundings of a modern day hospital. We made sure that Mom was comfortable, in her own bed, in her home that she loved so much.

We came back immediately after the bris and gathered around Mom as a family to say a final goodbye. In keeping with Jewish tradition, we laid her to rest that same day, in the late afternoon at the nearby cemetery, in a spot shaded by a pine tree with a view to the hills. My mother couldn't have chosen a better final resting place, nor a better hour to depart this world. How amazing that our mother chose the precise moment for her departure from this world. No doubt, God was watching over her and us. I am humbled by the inner wisdom that God in His infinite wisdom has granted us. If we can pause to listen, we will be so much wiser.

Naomi L. Baum, Ph.D., a psychologist, internationally consults in the field of trauma and resilience. She is the author of two books, "Life Unexpected: A Trauma Psychologist Journeys through Breast Cancer," and "Free Yourself from Fear: A Seven Day Plan for Overcoming Fear of (Recurrent) Cancer, both available on Amazon. Naomi is an avid traveler, scuba diver, cyclist and cook and blogs and publishes on her travels. She is a mother of seven, grandmother of sixteen, married to the same man for more than forty years and lives in Israel. Her website is: http://www.naomibaum.com

London Calling
In the Shadow of David and Goliath
Where Do the Laws of Nature Come From?
Saadiah Gaon, Rashi and Maimonides: How Three Rabbis Revolutionized Judaism
Comments