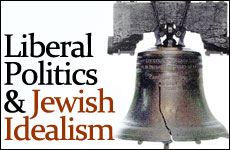 If we look at the last 100 years of Jewish political affiliation in the U.S., we see that, as with so many aspects of Jewish history, it remains an anomaly. Since the arrival of 2.5 million Eastern Jewish refugees from Czarist Russia between 1882 and 1914, an average of about 75% of the Jewish population has voted Democrat in national elections.

While approximately 23% of Americans classify themselves as liberal, the Jewish number is almost three times as high at around 73%. The question is why?

Much has been written on the topic. In the book, Jews in American Politics, Anna Greenberg & Kenneth Wald write:

Jewish Americans do not exhibit the same political tendencies as other demographically equivalent groups. For instance, we might expect Jewish Americans to become more conservative in their beliefs and voting preferences as succeeding generations attain higher levels of affluence and education. In fact, Jewish Americans are among the most highly educated, professional, and affluent members of the population…

But when we compare these Jewish American voters to non-Jews with the same socio-economic status, the Jews remain politically distinctive.

Simply put, as Jews mainstreamed into American society and their socio-economic status improved, the norm should have been for Jews to move to the right politically – toward a greater affiliation with the Republican party. Yet this has not been the case.

Much of the explanation for this continued strong affiliation with the Democratic Party has been linked to the historical experience of the European Jews in modern history. Jews fleeing from conservative/reactionary Tsarist Russia would naturally move in the opposite direction upon their arrival in America. In addition, the vast majority of these new immigrants arrived as poor laborers who worked for very little money in the sweat shops of New York under very difficult conditions. They would obviously choose to support the party generally regarded as more championing the rights of the working class – the Democratic Party.

While these historical experiences certainly helped to shape Jewish voting patterns in the first half of the 20th century, they fail to explain the continued strong affinity Jews seem to hold for the political left. Something is missing here. The sociologist, Ernest van den Haag, hints at this when he wrote:

Utopian dreams, millennial prophecies, and messianic expectations are as much part of their [the Jews] cultural heritage as is the practical worldly attitude… With emancipation, Jews have tried to influence their actual environment, in this world. But they have not given up their dreams. Many have become reformers; many others have become radicals… Of all groups… Jews are most prone to expectations of radical change… Although very few Jews are radicals, very many radicals are Jews: out of one hundred Jews, five may be radicals, but out of ten radicals five are likely to be Jewish… What attracts them so disproportionately to radical causes? ("The Jewish Mystique," 1969)

Interestingly, Judaism provides a deeper explanation. A look into the Bible helps us understand what truly drives this phenomenon. We begin at the beginning – with Abraham, the first Jew, whose uniqueness was two-fold:

In short, Abraham’s greatness came from his clarity and his commitment. Judaism teaches that these traits were passed on to his descendants, the Jewish people, and continue to manifest themselves in the collective personality of the Jews.

This explains another fascinating aspect of the Jews. Despite being only 0.2% of the world's population, at all times and in all places, they have always had a disproportionate impact on the world. This anomaly has not gone without notice in the non-Jewish world, as Mark Twain once wrote:

If the statistics are right, the Jews constitute but one percent of the human race. It suggests a nebulous dim puff of smoke lost in the blaze of the Milky Way. Properly the Jew ought hardly to be heard of; but he is heard of, has always been heard of. He is as prominent on the planet as any other people, and his commercial importance is extravagantly out of proportion to the smallness of his bulk… He has made a marvelous fight in this world, in all ages: and has done it with his hands tied behind him.

This Jewish "drive" is a neutral force that constantly pushes the Jewish people throughout history. It explains why Jews have won 23% of all the Nobel Prizes since 1901, but it also explains the disproportionate Jewish involvement in the early history of organized crime and major Wall Street financial scandals. Whatever Jews do, they usually do it BIG.

Energy is the basis of everything. Every Jew, no matter how insignificant, is engaged in some decisive and immediate pursuit of a goal… It is the most perpetual people of the earth.

This drive also explains the anomaly of Jewish political affiliation. From Abraham onward, Jews have constantly been trying to fix the world. Abraham's mission was to do this by reconnecting humanity to God, but in more recent times, when most Jews have been largely disconnected from Judaism, they have tried to do this in many other ways. This explains the hugely disproportionate level of Jewish involvement in so many causes, as well as the strong affinity Jews demonstrate for revolutionary and progressive movements such as communism and socialism.

Any top-down, holistic ideology that tries to right the wrongs of the world will always attract Jews. Edmund Wilson, the famous U. S. literary critic, saw this very clearly when he wrote:

The Jew lends himself easily to Communism because it enables him to devote himself to a high cause, involving all of humanity, characteristics which are natural to him as a Jew.

Pursuit of the “Isms”

This innate drive also explains the continued Jewish affinity for Liberal/Democratic ideology. An ideology that advocates using government as a top-down solution to fix the ills of society, care for the needy and provide basic health and welfare benefits for all citizens, will naturally be very attractive to the Jewish personality.

God’s party affiliation is "independent" and His political platform the Torah.

The real question from the traditional Jewish perspective is what constitutes correct political affiliation? While it is true that the tree of liberal ideology has largely been nurtured in a soil rich with Jewish values, it would be a mistake to believe that Judaism and liberalism are identical. If God could vote, His party affiliation would be "independent" and His political platform would be the Torah.

The concept of ethical monotheism and the values that come from the Torah have been the greatest moral, civilizing force in human history. Directly or indirectly, the idea of one God and one absolute standard of morality have profoundly impacted history and have served as a critical foundation for the creation of the modern, liberal Western world.

Sadly and ironically, the Jewish people, who brought these ideas to the world, are largely disconnected from them today. While 92% of Americans profess belief in God, American Jews statistically are the least religiously affiliated of any group in the United States. It seems that to a large extent the messenger has forgotten the message – and yet that high-powered Jewish soul continues to push the Jewish people into every “ism”… except “Judaism.”

It is my firm belief that in a world changing so rapidly, humanity desperately needs a strong dose of transformative Jewish values. The challenge facing the Jewish people today is to reconnect, to re-Jew-venate themselves – and then to collectively use that incredible Jewish drive to finish the job that Abraham started nearly 4,000 years ago.

Warsaw Ghetto Furniture
G-d Time
Shavuot is The Holiday of Cheesecake and Blintzes
What Does Kosher Mean Literally?
Comments
MOST POPULAR IN Jewish Society
Our privacy policy