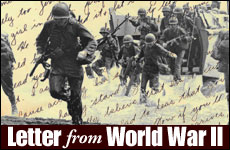 In commemoration of U.S. Memorial Day, a letter from an American Jewish soldier to his parents.

My father, Lt. Cmdr. Morris D. Coppersmith, came to America from a shtetl near Kiev at age two in 1913.  He enlisted in the U.S. Navy at the outbreak of World War II, eventually becoming a fleet commander of LSIs (Landing Ships, Infantry) in the South Pacific.  His ship's beach landings delivered Marines to the shores of many infamous battles, many times under enemy fire, and he was once under kamikaze attack.  My father died when I was 14; he had never discussed his wartime experiences.  In the '90s I found a dusty box of his wartime letters to his parents, my Bubby and Zeide.  This is one of the letters from that collection.  More letters can be read at http://www.topshot.com/dh/Victory.html 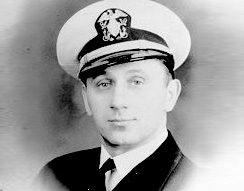 I just finished reading the short letter that Joe sent from Chicago relating that he had passed his physical examination for service in the United States Army. Somehow the letter did not leave me feeling blue or sad. Instantly my thoughts ran to the reaction and emotions of both of you, and I sincerely, deeply hope that you will have the courage to withhold your tears and agree with me that Joe should be in the service, and that you were fortunate to have made an education possible for him that was able to make him useful enough outside the Armed Forces so that he could be with you until this time. His enlistment in the service follows mine by two years less ten days.

We Jews are in a peculiar position in this war.

Our pained experience following wars and pogroms has been that anti-Semitism does not cease to exist; rather it grows; it grows. The infectious seeds of hate and prejudice that are sown during the months of war live on for many generations to come. Permit me not to overlook the both just and unjust accusations of the Jews who have been able to profit in a monetary manner from the conditions that war makes possible.

Were all men intellectually fair and just, there could be no doubt that the Jews did not start the war – they have bitterly learned that war does not operate to their advantage. It would be admitted that the war was a challenge to every human being the world over. It would be admitted that the world would be a less desirable place in which to live if the creed of the aggressors must need be adopted. Were all men true, they would agree that there are some shirkers and evaders in every race, but that the numbers among Jews that were guilty of this breach would be proportionately smaller than other peoples. Were all men unbiased, they would admit that the armed forces could fight no war without an efficient flow of supplies, and because of the experience of the Jew in the world of business and commerce, he is better suited for this particular type of activity. Also, there are a proportionately high number of Jews who are face to face with the enemy, both on land and on the seas.

Were all men inclined to reason, they would substantiate the fact that the fate of the Jew was but a forerunner of what men of other religions and creeds would inevitably meet. Were all men reasonable, they would follow the teachings of their God in the love of man for man and of their equality in creation. Were all men just, they would not overlook the fact that even in a monetary way, the Jew has not advanced to a greater extent than has his neighbors. Some of our numbers have had the products and means of serving the government in a manner that would bestow profits. Statistics would prove that our people were not the greatest profiteers. I'm well satisfied with the truth of that statement. We need neither fear nor feel ashamed. Our position is well defended.

When victory is ours, and the count is taken, Jews will be counted in every detail. We will have our heroes, our dead, our distinguished and our weaklings. I hope that it is better than an average record. I once heard a lecturer express, "To look like silver, a Jew must be pure gold." Unfortunately, the sentence carries more than a semblance of truth. While it is nigh impossible to be one hundred percent pure gold, we can strive for that goal.

That pretty well expresses why I am so proud to have Joe in the service. I know you must be too. Certainly it's a heartache to have your children reach the stage in life when you can take pride in their accomplishments and enjoy the fruits of your strivings, only to have them snatched from your side for brutal conflict, but remember, folks, you are only one of millions.

Have faith! Have courage! If tears you must shed, then make them not tears of sorrow or of self pity; make them tears of joy and pride.

Pray that a merciful God will make his absence only a short, temporary leave and that Joe will soon return to the warmth of your fireside. I'll repeat my previous expression that it is my candid opinion that Joe will be happier in the service than he was a civilian in times like this. True, his service to his country was at least as important at the Arsenal as it will be in the work that he now must turn to. Nevertheless, I wonder what must have been his feeling – a young, unmarried man, physically strong and mentally alert, still out of uniform. With what heart could he have walked among his fellow men in civilian clothes, when he must have known or believed that many of them were silently wondering whether he was evading the service or failing to do his part?

It will work a hardship on you to have him gone, I know. So many ponderous duties will be added to your already overburdened shoulders. Just do your best. It shouldn't be long. Never have fear! Joe will be happy to be in uniform, and he'll soon be back. Have faith! Have courage! If tears you must shed, then make them not tears of sorrow or of self pity; make them tears of joy and pride. You have every reason to be proud. Thank God that you have sons sufficiently fit that you can offer your country, as an expression of appreciation for the many bounties she has made possible for you and yours. As Jews and as Americans you are doing your part – make Joe feel that you are happy that he is being given an opportunity to do his.

My deep admiration and respect to Joe. May the good Lord watch over him, guide him, and bless him. From across ten thousand miles of ocean, I extend my warmest, firmest, most brotherly handclasp. I'm proud and I'm happy.

Know that I am well and that I think of you constantly.

Letting My Hair Grow Again
Why Are The Prayers Of Yom Kipur So Repetetive?
Ha'azinu 5783: A Time for Unity!
Twisted Thinking
Comments