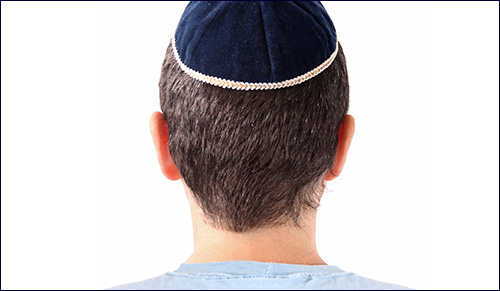 I am just an ordinary Jew. I’m not a scholar, I’m not a good or a bad Jew… I’m just an ordinary Jew. I celebrate the Jewish holidays, celebrate Rosh Hashanah, observe Yom Kippur and don’t eat bread for Passover. I wear a Jewish Star and have mezuzah on the door. I visit relatives at the Jewish cemetery once a year and light a yahrzeit candle in their memory. I have Jewish children (but that’s gotten a bit complicated).

And there are times I feel a bit lost, when I sense there has to be something more but haven’t found it. In these dark winter days when I find myself at odds, searching for the light to guide me, my computer becomes my connection. One day in my office I remembered an article I’d read on the Tenth of Tevet written by Rabbi Noah Weinberg, of blessed memory. It amazed me that with my upbringing and the education I gave my children it wasn’t until recently that I even knew what that date meant. But why should I? I am just an ordinary Jew!

In that article Rabbi Weinberg laid out his theory that by teaching one idea to another person we can begin to stop the downfall of Judaism. And it got me thinking about my Jewish upbringing.

When I was a young girl in Hebrew School I wanted to be a cantor. I loved learning Torah and the prayers and the cantoral music touched my soul. Even though my education was in an Orthodox Synagogue and both my grandparents kept kosher, our home was much less so. We loosely observed Shabbat; Friday night dinners with my Grandmother and Uncle, but we did not keep kosher and Saturday was a good day for shopping or outings.

But I was a Jew, and that meant a great deal to me. A few months later, my grandmother had a heart attack. She had always been my lifeboat, the only person who took the time to really understand me. So I prayed night and day for God to reconsider and let her recover. But three days later she died. I was so hurt by God’s rejection of my prayers and my needs, and vowed never to believe in God again.

For the most part I had kept that vow. Jewish holidays didn’t count because they were a family tradition. But looking back, I admit I was becoming more secularized. As a teenager I rebelled; got into trouble, ran with the wrong people and dated non-Jews.

I ended up marrying a non-Jew in a civil service and had two sons. Strange as it may seem, when they were born and I held them in my arms, it was as if God had personally given me this incredible gift! So I gave both my boys Hebrew names and sent them to Solomon Schechter Day School. My husband was very supportive of the boys’ Judaism, but after eight years that marriage ended in divorce.

Now, raising my sons alone, I seemed to find renewed feelings toward my Judaism, and in addition to home celebrations I took them to Shul. But they were bored with too much Hebrew and went to play basketball with the other boys. I sat there by myself and I realized this wasn’t the Judaism I wanted for them.

I found a very conservative Reform Temple and we all went and sat together for services. When it came time to prepare for Bar Mitzvah, my sons, 14 months apart, decided to prepare together. Their teacher saw my dedication and before long in a triple ceremony, the three of us celebrated our B’nai Mitzvah together. I was finally a Bat Mitzvah, taking my place in the Jewish Nation alongside my sons.

The more I brought Judaism into the house, the more they resisted.

Now being an ordinary Jew, that should be where the story ends; but there is so much more.

After our B’nai Mitzvah I started to get more connected to my Judaism, while my sons seemed to back away. The more I brought Judaism into the house, the more they resisted. They dated non-Jews, but what could I say, “Do as I say, not as I did!”

So we went in different directions. In 1995 my mom had a stroke and died three months later. That plunged me deeper into Judaism. But my younger son became a born again Christian and my older son became nothing.

I started going to Torah Study, Shabbat services, lighting candles and observing every Jewish holiday. Each week I gobbled up the weekly Torah portions, and over these 15 years learned numerous Jewish texts, even Kabbalah.

I have tried to talk to my friends and family about Judaism, but they all think I’m over the top. And of course the mention of not eating pork, or milk and meat makes even my closest comrades think I’m nuts.

I think I am still just an ordinary Jew. So that brings me back to sitting at my computer on this winter night when I read the words of the extraordinary Jew, Rabbi Weinberg, reaching out to us, to recognize that the siege is no different today – we are facing the same problems and making the same mistakes. We need to appreciate what God has given us; we have a beautiful heritage that we are duty bound to transmit from one generation to the other, and have somehow survived whatever this world throws at us.

Me, I am just an ordinary Jew who is inspired by the prayers we say, the music we sing and the ability to hold God’s words in my hands in a book that was given to my ancestors generations ago. These things reach deep into my soul and spur me on a journey to find my purpose and to climb the ladder to the next level. I know I have a long way to go, but perhaps coming to the realization that every Jew is in fact extraordinary and part of an extraordinary nation, that each of us can be a source of light that impacts the world, will continue to spur me on to whatever tomorrow will bring.

F. Barish-Stern has been a writer for over forty years and is the author of “Tell It to the Future, New Horizons, and “From an Idea…To Your Finished Story,” a guide for how to write your story, from start to finish. Her novel , “Code 47 to BREV Force,” has been made into a trilogy and is currently available as an e-book on Amazon. She teaches writing seminars, for all ages, and is currently a writing coach. More information can be found at: https://www.goldenquillpress.com

Prestigious Art Dealer Embraces His Jewish Heritage
Bechukotai 5782: Divine Retribution
Behar 5782: Working to Live or Living to Work?
The Wholeness of Being Broken
Comments
MOST POPULAR IN Spiritual Odysseys
Our privacy policy