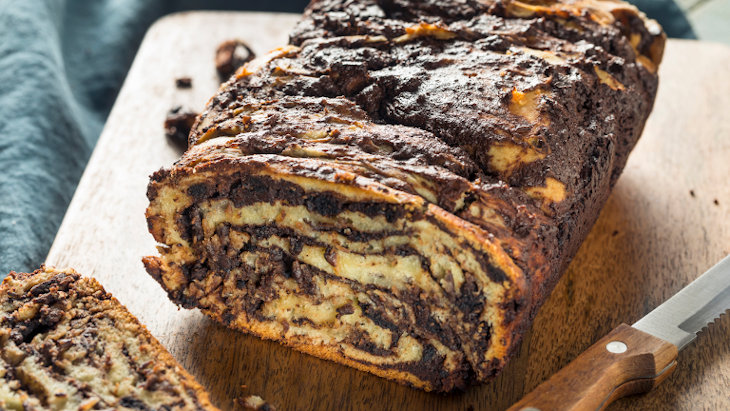 Now is the time to bake this traditional Jewish delicacy. Including special Shavuot recipe.

For millions of people around the world, the quintessential Jewish babka was introduced into the American consciousness by Jerry Seinfeld. In his 1994 episode “The Dinner Party”, Jerry and Elaine are invited to a dinner party and plan to buy a chocolate babka on the way. While they’re waiting in a bakery another couple buys the last one. Jerry and Elaine commiserate that no other cake is as tasty: “You can’t beat a babka!” The pair eventually spy another babka stuffed with cinnamon. Calling it the “lesser babka” they reluctantly buy the cake.

Babka is indeed a fantastic pastry: light and airy, with a yeasty fluffy dough containing swirls of sweet stuffing inside. Popular fillings include nuts and cinnamon, marzipan, jam and chocolate. While there are babka like cakes found throughout Eastern Europe, babka today is indelibly tied to Jewish cuisine. Sliced and served with a cup of tea or coffee, babka is the ideal dessert after a Shabbat or holiday meal.

Historians aren’t entirely sure where babka originated. Cookery writer Lesley Chamberlain, who specializes in Eastern European cuisine, thinks that babka, with its bread-like texture and taste, is reminiscent of the Italian festive pastry panettone. She posits that Queen Bona Sforza of Poland brought the pastry to Eastern Europe in the 1500s, where it evolved into a distinctively Eastern European confection.

Babkas were baked in high, wide, round pans, like panettone. They became popular throughout Eastern Europe, in Poland, Ukraine, Russia, the Baltics and Belarus. The name babka evolved from Baba, which means Grandma in several Eastern European languages, including Yiddish. Babka is a diminutive of baba, meaning “little grandma”.

Jewish bakers developed their own versions of babka, inextricably linked to the Jewish Shabbat. On Fridays, Jewish mothers and grandmothers would prepare large batches of sweet, fluffy bread dough for their family’s challah loaves. The dough was ideal for baking babka, and in many homes, housewives would prepare extra dough, then use it to bake babkas inside smaller bread pans. Jewish babkas were small and loaf-like, as opposed to the taller round versions their non-Jewish neighbors often made.

A key difference between Jewish and non-Jewish families’ babkas was the presence of oil versus butter. Non-Jewish housewives typically made their babkas with butter and milk, giving them an airy texture, much like the French loaves of sweet bread called brioche. Jewish women usually wanted their babka to be parve (without milk or meat products) so that they could be enjoyed after a festive Shabbat meal containing meat. Jewish bakers would add a streusel topping of sugar, flour and oil or margarine to the top.

Food historian Gil Marks notes that a special version of shikkera babka (literally “drunken grandma”) was drizzled with a syrup containing whiskey or rum and served on the Jewish holiday Purim. Polish Jews would break the fast on Yom Kippur with babka, and special “milchig” versions containing dairy were sometimes baked for the Jewish holiday of Shavuot when it’s customary to eat dairy foods. (Encyclopedia of Jewish Food, by Gil Marks. John Wiley & Sons: 2010.)

When Jewish families began emigrating from Eastern Europe to North America and elsewhere in the late 1800s, they brought their taste for babka with them. Many Jewish housewives began adding chocolate, now affordable, to their traditional babkas

Many families have their own beloved babka recipes. Here are three delicious versions to get you started.

Babka with Cinnamon and Raisins 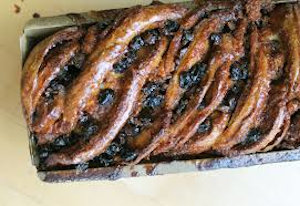 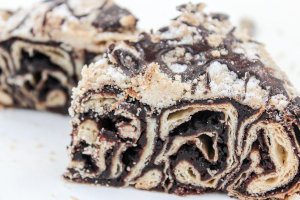 1. In the bowl of an electric mixer fitted with the paddle attachment, or the bowl of a Magic Mill or Bosch mixer, beat the milk or soymilk, eggs, butter or margarine, water, sugar, salt and yeast, until combined. If using a stand mixer, switch to a dough hook. On low speed, incorporate the flour and mix until smooth, shiny dough is formed, about 6-7 minutes. If using a bread machine, add the ingredients to the pan according to manufacturer’s directions and set to dough cycle. You can also knead all the ingredients by hand until a smooth satiny dough is formed. Cover the bowl with plastic wrap. Set aside in a warm place until doubled in bulk, about 1 hour.

2. Meanwhile prepare the chocolate filling. On a cutting board, with a sharp knife, preferably serrated, very finely shop and shave the chocolate. Transfer it along with any of the shavings from the cutting board to a large bowl. If you don’t have good knife skills, you can transfer moderately sized chunks to the food processor to pulse until finely chopped. Return the chocolate to the large bowl. Mix in the sugar and cinnamon. Pour the warm melted butter over the mixture and stir until chocolate is coated and it looks like wet sand.

4. Turn the dough out onto a lightly floured surface. Roll the dough into a large 17X21 inch rectangle. Sprinkle on the chocolate filling in an even layer to cover all the dough. Starting with the long side of the rectangle, roll up the dough, jelly-roll fashion. You can use a bench scraper or thin metal spatula to help ease it off the counter and to help roll. Using a sawing motion, cut into 1 inch thick slices.

5. Place the rolls flat into the prepared springform pans. It’s okay if the rolls don’t completely fill the pan; they will expand as they bake.

6. Prepare the crumb topping. Place the confectioner’s sugar and all-purpose flour into a medium bowl. Add the melted butter or margarine and pinch to form large crumbs. Make sure they look moist, but don’t over pinch: leave most of the crumbs nice and big, about 1 inch.

7. Bake, uncovered, for 25-30 minutes, until the crumbs look dry, the chocolate looks melty, and the dough is baked and starting to brown in some spots. Do not overbake or the cake will be dry, especially if making in advance and reheating.

8. When ready to serve, release the spring on the pan and remove outside ring. Serve warm or at room temperature. 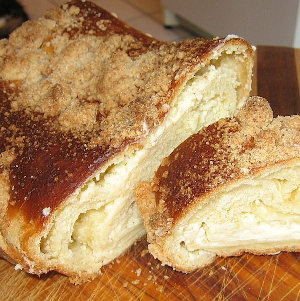 For later: Egg wash (1 egg plus 1 tablespoon water) for brushing cakes before baking.

To make the dough:

To make the filling:

Whisk all ingredients together except the almonds to create a smooth mixture. Use immediately, or cover and keep in the fridge for 1-2 days. Reserve the almonds for sprinkling over the formed cake just before baking.

To make syrup for basting the Babka once it comes out of the oven:

To assemble the Babka:

Chicken Soup for Your Health

Kosher By Design: Lightens Up
Is Grease the Word?
Dried Fruit Compote
Scientific Curiosity and the Divine Encounter
Comments
MOST POPULAR IN Family
Our privacy policy
Aish.com Is Looking for Great Writers