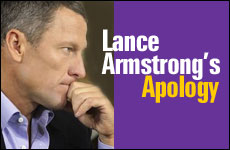 How to properly say you’re sorry.

The Lance Armstrong affair can teach us many important principles of “righting a wrong.“

I am not here to judge another person. But I believe that we can learn from the mistakes Armstrong made in trying to repair his misdeeds. The way we apologize makes all the difference in the world.

Last month, Lance Armstrong sat down with the head of the U.S. Anti-Doping Agency and – against the advice of his lawyers – had a private conversation. Armstrong had been banned from cycling for what the agency called the “most sophisticated doping program on the planet.” The seven-time Tour de France winner and star cyclist hoped to change all that.

At the meeting Armstrong spoke openly about doping. He argued that cheating was rampant in all pro sports, including the National Football League. He complained that he was being singled out for punishment.

When we realize that we have let people down and made bad decisions, we cannot confess by rationalizing our errors. By making excuses we show that we have not yet faced up to our actions. Blaming others reveals that we are not strong enough to confront ourselves. The words are irrelevant. We have failed to take responsibility.

Armstrong offered to be interviewed by Oprah Winfrey on a show that drew millions. Oprah pressed Armstrong on what drugs he used, his attacks on those who outed him, and how he explained himself to his eldest son.

At one point, Armstrong addressed Betsy Andreu, the wife of a former teammate who testified that he had doped. He told Oprah how he had called Betsy to apologize for calling her crazy, bullying her, ostensibly blackballing her husband’s career.

Apologies don’t work when we ‘playfully’ hurt the person we are apologizing to all over again. Don’t be a comedian while making amends. And certainly don’t smirk or try to charm your way out of the situation. That’s belittling your words. Just be sincere and speak from your heart.

Oprah asked Armstrong about Emma O’Reilly, who also testified against him. He had tried to sue her despite her lack of financial means. Armstrong chuckled that he had sued so many people, he couldn’t remember if he brought legal action against her, too.

“She got run over, got bullied,” he said.

If Armstrong would have said, “I ran her over. I bullied her,” he would have acknowledged accountability. By using the passive tense – “run over, bullied,” Armstring avoided taking ownership of his mess.

If you wronged someone, admit it and use the “I” word. ”I’m sorry I hurt your feelings” is much more sincere that “Sorry your feelings were hurt.”

4. Don’t Rationalize or Blame Others

Armstrong told Oprah that he looked up the definition of “cheating” and insisted he was not truly cheating in the strict sense of the word. Again, he went looking for loopholes and the “everyone was doing it” mentality.

Throughout the years I have met with many couples trying to deal with the chaos that surrounds their lives. Some of these homes were filled with anger, constant tension, and a lack of shalom bayis – peace in the home. Others had children who felt that a parent was distant, too harsh, or never available.

When I sat down with both the husbands and wives, here are some of the “apologies” I heard:

By rationalizing your actions, the “regret” becomes meaningless. It doesn’t matter that you feel badly; you have not held yourself accountable. At the end of the day it will always be someone else’s fault. There will always be another excuse – it’s my job, my boss, my kids, my wife, my husband, my dysfunctional parents.

When children mess up and say, “Everyone’s doing it,” or “You’re just picking on me,” we don’t let them get away with that. So why do we give ourselves a pass instead of honestly admitting we’re wrong?

To rectify our actions, we must apologize with humility. This means understanding that we were hurtful even if we did not mean to be. Confront our internal blemishes – while leaving the excuses and rationalizations behind.

The Power of Teshuva

Our Sages tell the awesome story of Elazar ben Dordaya who sinned in terribly immoral ways. One day, a woman remarked to him that he could never redeem himself. She said he had fallen so low it would be impossible for him to ever climb out of his spiritual mess.

Somehow, her words affected him. He realized that he had squandered his life. He wanted so badly to repair his past – but would it be possible? He cried out for help to the sun and the moon, the heavens and earth, the mountains and hills. But there was only silence.

This awful life is not my fault. It is because of my bad mazel – my karma, the constellations in the sky that have guided me and led me astray. It is the mountains - the harim in Hebrew, which refer to horim, ”parents,” who never gave me the right foundation. It is the fault of the heavens and earth, the environment I grew up in.

My traits are inherited, my nature is difficult, and my home did not teach me. All this has pushed me to make bad choices in life. Don’t blame me.

The silence was deafening. Finally, Elazar ben Dordaya understood it was time to stop looking for other avenues of excuses. He must begin by taking full responsibility for his actions. No one else can repair his life besides himself.

He then cried out: “If so, then no one else is responsible but me!”

He sat down on the ground, put his face between his knees and wept with such emotion until his soul departed this world. At that moment, Elazar ben Dordaya merited the title of both rabbi and teacher. He taught us the power of responsibility and return. A Heavenly voice declared: “Rabbi Elazar ben Dordaya has been accepted for eternal life.”

How Can We Repair?

Of course, if we realize that we have messed up, we do not have to drop to the ground, become hysterical, or live with raging guilt. Yet we do have to take this great teaching with us – no blaming, no rationalizing, no excuses.

At some time in our life, we will all find ourselves seeking forgiveness. Even if we did not mean to cause pain, we will need to find a way to repair the hurt. If we can at least speak in humility, lose the arrogance and excuses, and take the first step by sincerely apologizing, we can hope to heal and rebuild.

“I hurt you and I am responsible for the pain I caused. I hope to become wiser and better in the future. Please forgive me. I am sorry.”

5 Steps to Letting Go of Resentment

Missing the Obvious
The Softball Player
How This 6 Generation Bread Baker Brought Back Israel’s Ancient Grains
Olivia Newton John’s Grandfather was a Nobel-Prize Winning Jewish Physicist
Comments
MOST POPULAR IN Spirituality
Our privacy policy
Aish.com Is Looking for Great Writers