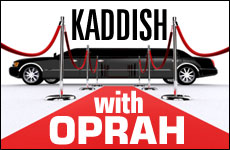 Need a minyan? Nothing is too complicated for the Oprah show.

The phone rang in my New York hotel room. It was 1995, and I was saying Kaddish for my late father, of blessed memory, Joseph Jacobovici. I live in Toronto, but I'm a filmmaker, so I move around.

During my eleven months of saying Kaddish, I ended up in various minyans from San Francisco to Halifax. Once I extended a stopover in Detroit and rushed to the basement of an old shul, where I was greeted by nine octogenarians as if I were the Messiah himself. But the phone call in New York was the start of what turned out to be perhaps the most interesting Kaddish experience of them all.

I had just finished a documentary film called "The Selling of Innocents." The film won an Emmy, attracting the attention of Oprah Winfrey, the American icon and celebrated TV host. The producer at the other end of the telephone line asked if I could fly to Chicago and appear with my fellow producers on the Oprah show the day after next.

I was taken aback. This was the Oprah show. The big time. Great publicity for the film, and great promotion for me and my company.

"Why not?" the producer asked, her voice betraying her surprise. Nobody says "too busy" to the Oprah show.

"I have a problem," I answered.

The producer's voice, Lisa was her name, became steely. All business. "What's the problem?" she asked.

I began the process of explaining to a non-Jewish television producer from Chicago about the Jewish ritual of Kaddish.

Whenever I had to explain this, people never quite got it. I would tell them that I need a minyan, and they would drive me to an empty shul.... It never quite worked out. But this was Oprah. So I gave it a try.

"I'm Jewish. My father passed away. In our religion it's incumbent on me, three times a day, to say a certain prayer, a glorification of God's Name, really. It's called Mourner's Kaddish. To do this, I need to be in a ‘Jewish quorum.' It's called a minyan... So I can't miss this ritual. If I come to Chicago, I would have to attend morning services prior to being on Oprah."

"No problem," she said. "You need a minyan to say Kaddish. Ten Jewish men. For morning services. I'll arrange it."

"It's not so simple," I said. "You may find a synagogue, but it might not have a minyan in the morning. Or the Jewish community may send you to a synagogue that's open... which wouldn't do the trick for me."

Lisa tried to be patient. "I'll fax your flight information to your hotel. You will be met in Chicago by a limo. The driver will have the minyan information. You will say Kaddish for your father."

The hotel room was beautiful. I slept like a baby. At 6:30 in the morning, I came down and stepped into my limo. There was a newspaper on the seat.

I could get used to this, I thought.

The driver pulled up in front of a downtown office building and told me that there was a Chabad Lubavitch minyan on one of the upper floors.

When I got there, the rabbi looked at me and said, "So you're the guy saying Kaddish. I was warned by the Oprah show that I'd better have a minyan."

We smiled at each other. I was really impressed with Lisa and Oprah. And I felt that my father was surely amused. After davening, my driver took me to the Oprah show. I was met by Lisa, a black woman in her thirties. She got straight to the point.

"Was it proper? Did you say Kaddish?"

"Absolutely. Couldn't be better," I answered.

She looked at me with that look that star surgeons have when they come out of the operating room. Or maybe it's the look that battle commanders have when coming back from a military operation. It's a look that says, "Nothing is too complicated."

I was on Oprah. She was very professional. I had my five minutes of fame. But all I can remember of that day is the Kaddish.

My Battle with Covid-19

In France, Running Away from Judaism

Sudden Death
The 21st President of the United States: Failure or Inspiration?
Hiding Their Jewishness
The Jewish Pope: Following the Questions Home
Comments