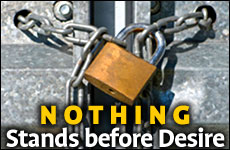 Only an hour and a half remained until candle lighting Friday afternoon in Jerusalem. The cashiers were finishing up with the last remaining customers, the workers were putting away their mops, the managers were locking up their offices. The week was over, the Shabbos queen was on her way and it was time to go home and get ready to welcome her.

But the small bald man with the quick smile thought otherwise. He ran up to the door out of breath, thanking God that the store was still open. He tried to walk in, but the guard with the metal-detecting baton stopped him.

"Please," the man replied in rapid-fire Hebrew. "I just need to get a few things for Shabbat."

"It will take me two minutes and no more."

"It might as well take you an hour. You're not coming in. Sagur!"

"Please sir. I have a family. What will we do for Shabbat?!"

"We all have families," the guard said, starting to get heated. "And we have to all get home for Shabbos. If we let in everyone –"

The clever man spotted an opportunity and wasted no time taking it. He turned himself sideways and slipped right on through the door jamb. The guard spun around and lunged to catch him, but the man was too quick; he was inside the store.

He ran to the challahs first, smiling and smoothing ruffled feelings over his shoulder. "It will only take me a few seconds. It's so kind of you to let me in."

He picked out a few challahs, threw them into a plastic bag, and ran to the fish. "I'm almost finished already. Thank God I have such a big family."

He ran to the vegetables, picked out a bag of salad, some tomatoes, a few cukes, a handful of onions. "Just a few more things. This makes me feel proud to be a Jew."

He ran to the canned goods -- grabbed some olives and pickles. "The kids love these. A blessing on your heads."

He ran to the desserts -- grabbed a big round cake and a package of candy. "For the honor of shabbos." He said piously and ran over to one of the cashiers sitting at her checkout counter.

A middle-aged stoic, Russian immigrant, she would not take monkey business from anyone. When the man threw everything onto the conveyor belt, she simply leaned back in her chair, folded her arms over her belly, and said solidly in her thick Russian accent, "Sagur – closed."

"Please miss. It will just take you one minute to ring me up."

She sat there, her arms folded, stoic and unyielding. "Sagur."

"For the honor of the holy Shabbat."

"For the sake of my wife and seven children."

"For the sake of the Holy One Blessed be He!"

"Have mercy on me and my descendants!"

It was clear to everyone -- the managers, the guard, the other cashier, the workers and even to the man himself -- that it was all over. She wasn't going to budge. The man's shoulders slumped forward. He cast his eyes to the ground. If he couldn't pay for the food, he couldn't have the food. It was as simple as that. Chutzpadik he was; a thief he wasn't.

Then suddenly his face lit up.

He pulled a big white plastic bag off the dispenser and threw everything in. Ready for his quick getaway, he opened his wallet, pulled out enough bills to more than cover his purchases, slapped them onto the counter with a "Thank you very much" and ran out of the store as fast as he could. Everyone was too shocked to do anything other than stand there, but that wasn't the end of the story. Half a minute later, his little bald head and hand appeared from one side of the door jamb.

"Shabbat Shalom!" he said to everyone, smiling, and then disappeared.

Our sages teach, "Nothing stands before a person's desire."

When the door to achievement is somewhat ajar, if our desire to accomplish is great enough, the Almighty will help us get it done.

If that man had come to the store only five minutes earlier, there would be no story. The guard would have let him in, he would have done his shopping and he would have gone home.

If the man had arrived at the store only five minutes later, there would be no story. The store would have been locked shut and the man would have gone home empty-handed.

It was only when that door was somewhat ajar -- when it was hard for him to accomplish what he wanted, but not impossible -- that his desire gave him the nerve, the cleverness, the zeal and the strength to overcome the significant obstacles in his path (even though what he did in this case was ultimately wrong).

"Nothing stands before desire" is a realistic formula for accomplishment. It says that when the door to achievement is somewhat ajar, if our desire to accomplish is great enough, the Almighty will help us get it done. We may have to push a bit beyond our boundaries and venture out into uncharted territory. But when we know what we want, and we know that it is the right thing for us -- then nothing can stand in our way.

My Father, The Alchemist
Chukat 5782: Let’s Play the Blame Game!
The Sin of Moses: The Two Ways to Communicate
In Aftermath of Chicago’s July 4th Shooting, Local Moms Provide Countless Points of Light
Comments
MOST POPULAR IN Spirituality
Our privacy policy