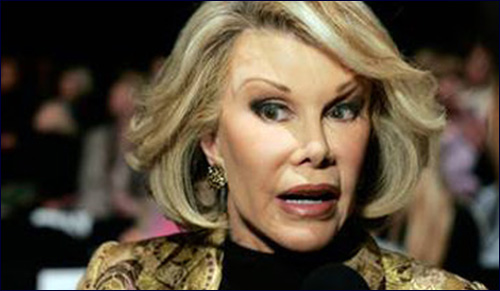 She used her acerbic wit to defend Israel and the Jewish people.

On June 8, 1933 a little girl, Joan Alexandra Molinsky, was born. Her parents, Beatrice and Meyer, were Russian Jewish immigrants who raised their two daughters originally in Brooklyn before settling in Larchmont, New York. Joan graduated Phi Beta Kappa from Barnard College in 1954 and before entering show business, she worked as a tour guide at Rockefeller Center, as a writer at an advertising agency and as a fashion consultant at Bond Clothing Store. She changed her name to Joan Rivers when she entered the acting world, and in February 1983, she became the first female comedian to ever perform at Carnegie Hall. She became famous for her direct sense of humor and for her insistence in "telling it like it is."

Though Joan was not an observant Jew, she was a member of Temple Emanuel in New York and often stated publicly that she "loved Israel." In the middle of Operation Protective Edge this past summer Joan told the media: "Let me just tell you, if New Jersey were firing rockets into New York, we would wipe them out. And Palestinians, you cannot throw rockets and expect people not to defend themselves. Don't you dare put weapon stashes in private homes. They started it. You're all insane. How do I know? Because I have been over there. That's how I know. And I wish the world would know. And BBC should be ashamed of themselves and CNN should be ashamed of themselves and everybody stop it already."

When Joan died on Thursday afternoon at the age of 81, from a series of cardiac complications following a routine surgery, the Jewish people lost one of our most outspoken and unapologetic voices. We may not have appreciated all of Joan's jokes or her satirical humor style, but we can learn from her courage and strength. Here are ten of her quotes that teach us how to follow our own dreams and stand up for who we are:

1. Appreciate the moment. "Yesterday is history. Tomorrow is a mystery, today is God's gift, that's why we call it the present."

3. Examine your beliefs. "Don't follow any advice, no matter how good, until you feel as deeply in your spirit as you think in your mind that the counsel is wise."

4. Speak up. "I succeeded by saying what everyone else was thinking."

6. Be true to yourself. "I'm in nobody's circle, I've always been an outsider."

7. Pursue your dreams even when the world tries to take them away. "What are people going to do? Fire me? I've been fired before. Not book me? I've been out of work before. I don't care."

8. Face your fears. "I lived to be on stage and I'm terrified. Terrified before every show."

9. Use every opportunity. "I was smart enough to go through any door that opened."

10. Have confidence in your work. "You can find my book at your favorite bookstore and if it isn't there find a new favorite."

But the greatest legacy that Joan Rivers left the world is her famous expression: “Can we talk?” Joan was a person who lived her life as a connector, as someone who wanted to reach audiences, small and large and share ideas and struggles with others. In 1997, Joan published a candid book describing her struggle with bulimia after her husband’s death. And despite undergoing multiple plastic surgeries, Joan was open about her continuing challenges with her self- image culminating in her bestselling book “I Hate Everyone Starting with Me.”

Can we take this precious lesson from Joan Rivers and use it to change our own lives? To speak up when we need to. To face our fears. To share our struggles. To reach out to the world and to each other even when it seems like no one is listening.

Is there someone that you need to speak to? Is there something you have been wanting to share? Is there a conversation you know you need to have, but you can’t seem to build up enough courage? Try Joan’s three words: "Can we talk?" Sometimes that is all you need to say.

Thank you, Joan for teaching us how to speak up and how to share our struggles with each other. And for using your talents for defending Israel and the Jewish people.

How Jerry Lewis Changed My Life

Why We Love Zombies

The Secret Chord: Jimi Hendrix's Message to Love
For Every Individual, A Torah Scroll
Allegiance To The Monarch
Meet the Real You: Yom Kippur
Comments
MOST POPULAR IN Current Issues
Our privacy policy
Aish.com Is Looking for Great Writers