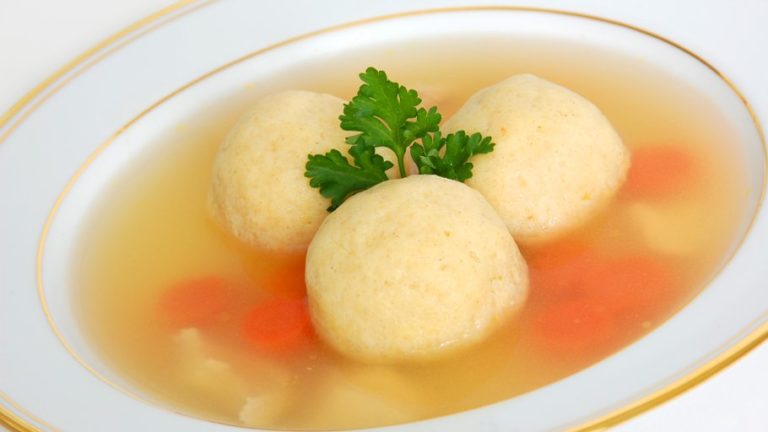 Can a 3D printer make a matzah ball?

Researchers at Tel Aviv University have successfully printed the world’s first 3D heart using a patient’s own cells and biological materials to “completely match the immunological, cellular, biochemical, and anatomical properties of the patient.” This is a massive step for the advancement of organ transplantation, not to mention a point of Jewish pride that it was created by Israeli researchers.

It does raise one question, certainly. What other cool Jewish objects have recently been created on 3D printers? I know you’re busy, so I’ve put in the research hours and have discovered the following Jewish 3D objects. If only Moses could have been here to witness this.

While many might consider it a sacrilege to create a matzah ball on a 3D printer, those more forward-thinking Chosen People will realize that this could be the future of Jewish food. Do they have the same texture, taste and aroma as those of your Bubbe’s? Of course not. But take a look at the first car or the first pair of shoes. Things evolve. And if you’re really in a hurry, how cool is it to tell your son, “Shlomo, head over to the 3D printer and run me off a couple dozen matzah balls.”?

For those who didn’t grow up as Jews, Dreidel is a game played during the festival of Hanukkah. It’s a four-sided spinning top marked with the Hebrew letters Nun, Gimmel, Hey and Shin, an acronym for the phrase “A great miracle happened there”. The real miracle here is that there’s no need to seek out a store selling Jewish ritual objects. Just have your 3D printer create a bunch of them and you and your friends and relatives will soon be gambling like our forefathers! And you thought the longevity of the Chanukah oil was a miracle!

A kippah, or yarmulke, is a brimless cap, usually made of cloth, worn by male Jews to fulfill the customary requirement held by Orthodox halachic authorities that the head be covered. How many times have we men arrived at shul for services, or at someone’s house for Shabbat dinner, having forgotten our kippah? Thanks to today’s advanced technology, your kippah-less arrival should be a thing of the past. Run off a dozen or more of them on the printer and stick one in the inside breast pocket of each of your suit and sports jackets. Problem solved. One wonders how our forefathers got along without 3D technology.

For those unfamiliar with the Shabbat ceremony, the challah cover is an opaque cloth, often made from embroidered velvet, although any fabric can be used, that is used to cover the challah bread at the beginning of the Friday night meal. It is customary to keep the loaves covered until after the Kiddush blessing is recited over wine. Would the Shabbat ceremony be any less sacred if the challah cover was created by an electronic printer? Sadly, the great sages are no longer around to ask, so I’m just going to assume they’d be good with it. For example, if you’re in a hurry to leave Egypt, you certainly don’t have time to wait ‘til Amazon delivers your challah cover, much less bake a challah in the first place!

A mezuzah is a small box containing verses from the Torah written on parchment that is affixed to the right doorpost of Jewish homes. It often displays the Hebrew letter, Shin, the first letter of one of God’s names. The practice of affixing a mezuzah derives from Deuteronomy (6:9): “And you shall inscribe them on the doorposts (mezuzot) of our house and on your gates.” The little rolled up paper inside the mezuzah, the klaf, must be hand-lettered by a kosher scribe — one who is observant of halacha (Jewish law) and who qualifies for the task. So, obviously, only the outer mezuzah case could be 3D printed, unless one could hide a kosher scribe inside the 3D printer.

The seder plate is the centerpiece of the Passover seder table. It traditionally holds five or six items, each of which symbolizes a part (or multiple parts) of the Passover story. If you print one out on a 3D printer, you must also learn to fold it to create sections for each of the items, otherwise your haroset could leak into your bitter herbs and no telling what madness might result. You might also wonder how a paper plate could be sturdy enough to hold a shank bone. It’s a question greater minds than mine have struggled with for centuries. Which is why you so seldom see a paper seder plate.

A sukkah is a temporary dwelling with a thatched roof used during the fall festival of Sukkot. Traditionally used for holiday meals, some Jews live as much of their lives as possible in a sukkah during the holiday, even sleeping there. You might wonder how a printer could turn out something as large as a sukkah. The truth is it doesn’t print out the entire sukkah at once. It prints out 2700 pieces of the sukkah, which you then have to fasten together to create the whole structure. Why would someone go to that trouble? To say, “You know, this sukkah came from a 3D printer”, of course!

The afikomen is a half-piece of matzo which is broken in two during the early stages of the Passover Seder and set aside to be eaten as a dessert after the meal. Following Ashkenazi customs, the head of household may hide the afikomen for the children to find, or alternatively, the children may steal the afikomen and ransom it back. In any case, the afikomen is perhaps the most logical object to make on a printer, because the printer version tastes nearly as bland and plain as its real-life counterpart. I therefore have high hopes for a product I’m currently developing to improve its taste – Afikomen Helper. You’re the first to hear about it.

Don’t Ask Your Elderly Parent This!

Israel Initiates Recycling Program; Arab Street Erupts in Anger
Blessing on Chewing Gum
Was Rahab a Prostitute?
Extras In Our Own Epic
Comments
MOST POPULAR IN Jewlarious
Our privacy policy