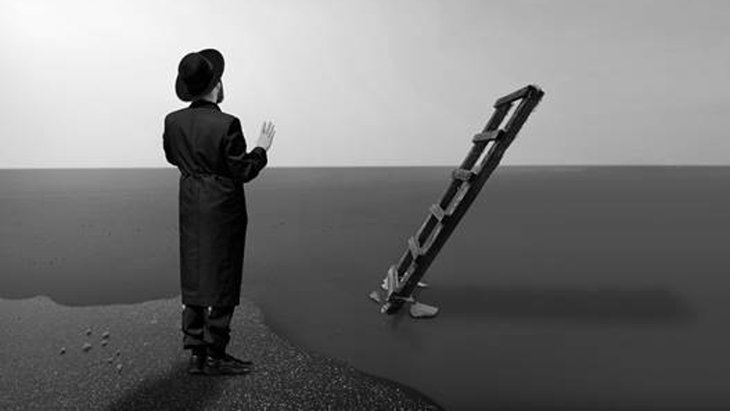 A unique and modern refresh of a centuries-old subject.

It’s 10am when I meet Zvi Suchet and he looks very tired. “I haven’t slept all night,” he explains, “I had an image in my mind and I couldn’t stop until I brought it to life. To tell you the truth, I would have had the same story every day for the last week”. As tired as he is, Zvi’s eyes are still bright and alive with passion as he shows me his new piece – a scene of three rabbis in a dark forest, intently discussing a delicately-held cloud, in the background Zvi’s signature black birds fly past.

In just under 6 months, Zvi has not only created his debut 40-piece collection but has already caused a stir in the international art world with his “Jewish Magical Realism” – a style that is, according to leading Israeli gallerist Avital Lang, “completely unique in its style and subject matter, it is a modern refresh of a centuries-old subject”.

Born in Cape Town, South Africa, Zvi has worked as a professional photographer since publishing his first book at the age of 12. The book showcased his highly-technical photography of Israeli stamps and was inducted into the Smithsonian Permanent Collection in 1992. Since then, under the name, Marc Hoberman, he has published over 40 books and is the founder of HOBERMAN – a publishing house internationally renowned for producing luxurious photographic books. 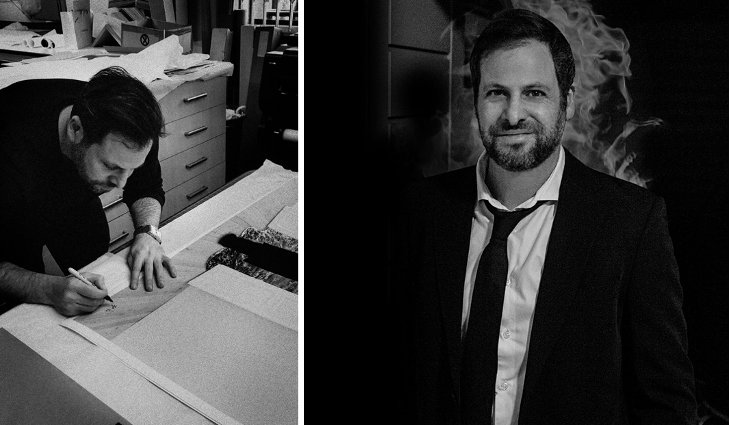 At the start of 2019, Zvi decided to embark on a journey of creating a fine art collection to share his “visions” with the world. “When I was a child I had a very visual mind, and at my school’s morning prayers I loved to imagine all sorts of scenes. I once heard this lovely story from a Rabbi about a young boy who came to synagogue for the first time. He was from a poor village and couldn’t read. So instead of praying he recited the aleph-bet which was all he could think of doing. The congregants laughed at him, but the Rabbi explained that God would turn his letters into prayers. I really related to this and hoped that Hashem would accept my ‘visions’ as my form of sincere prayer”. Working on his craft for over 20 years, Zvi finally felt that he had acquired the skills needed to put these “prayers” on paper to share and hopefully inspire others.

To produce these complex scenes, Zvi uses a mix of photography and digital “photo-illustration”. Coming from a traditional background, Zvi delved into many late nights of study to produce each piece, as he explains, “I became absolutely fascinated with the depth of the Talmud, everything has a limitless trail of thoughts and discussions and meaning. Every day and night I research more and I bring all my questions to my Rabbi for discussion the next day. I have been blessed to find my Judaism through this project. I like to think of it as God answering my childhood prayers.”

To discover more and to see Zvi’s videos of each piece’s symbolism, visit www.zvisuchet.com

Images with comments by Zvi Suchet: 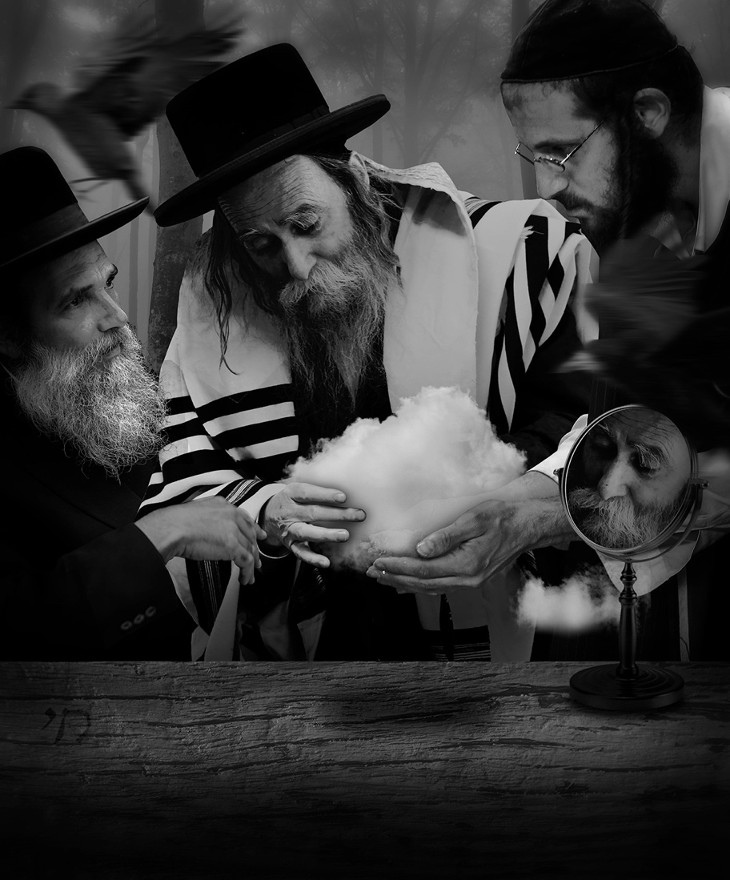 One of my favourite elements of Judaism is the openness and encouragement to discuss and debate. The reader of Jewish texts does not simply read words printed on a page, the reader is an active player on the page and with the page – a vocal participant in the conversation. I cherish this uniquely inclusive culture, the sight and sounds of the Jewish debate is simply beautiful and connects us to what must almost certainly be the longest conversation in history. 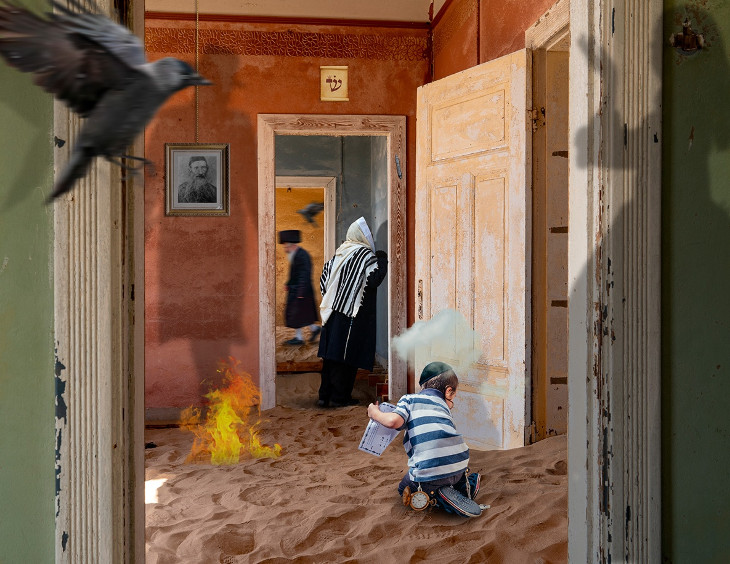 Within one image, I aim to show the life of a Jewish man. Following his traditional path, the visual shows both his heritage and at the same time his future. I placed the shin above the doorframe – on my path through life I have always looked to the magical 21st letter of the alef-beis. It is an incredibly powerful visual that has endless meaning. The three lines of the shin may be interpreted as three general dimensions of a human being: Kesser (will and pleasure), the intellect, and the emotions. Simultaneously the three lines of the shin can signify the three pillars upon which the world stands: the study of Torah, prayer and good deeds. Visually the letter itself looks like a crown. I believe Judaism gives us all this crown – to live our lives with the responsibility of kings. A surprise! Did you see it? The shadows of Aba and Ima are in the “wings” proudly watching the scene unfold. 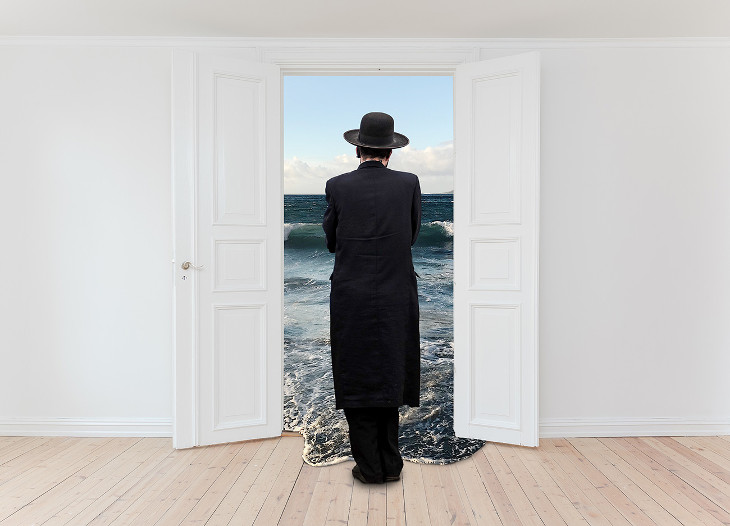 The Rabbi of Port Louis

This piece is dedicated to Rabbi Moshe Silberhaft – the legendary South African “Travelling Rabbi”. Rabbi Silberhaft is known as the rabbi with “the largest congregation in the world, but not in numbers”. He covers an area of 15,000 square meters encompassing 13 countries from South Africa in the south to the Congo, Uganda and Kenya in the north and the Indian Ocean islands of Madagascar and Mauritius. From circumcisions and bar and bat mitzvahs to weddings and funerals, The Travelling Rabbi greatly impacts the lives of Jews in far-flung small or non-existent communities. I decided to name this piece after the region of Port Louis on the Indian Ocean island of Mauritius where my wife, Sarah, is from. 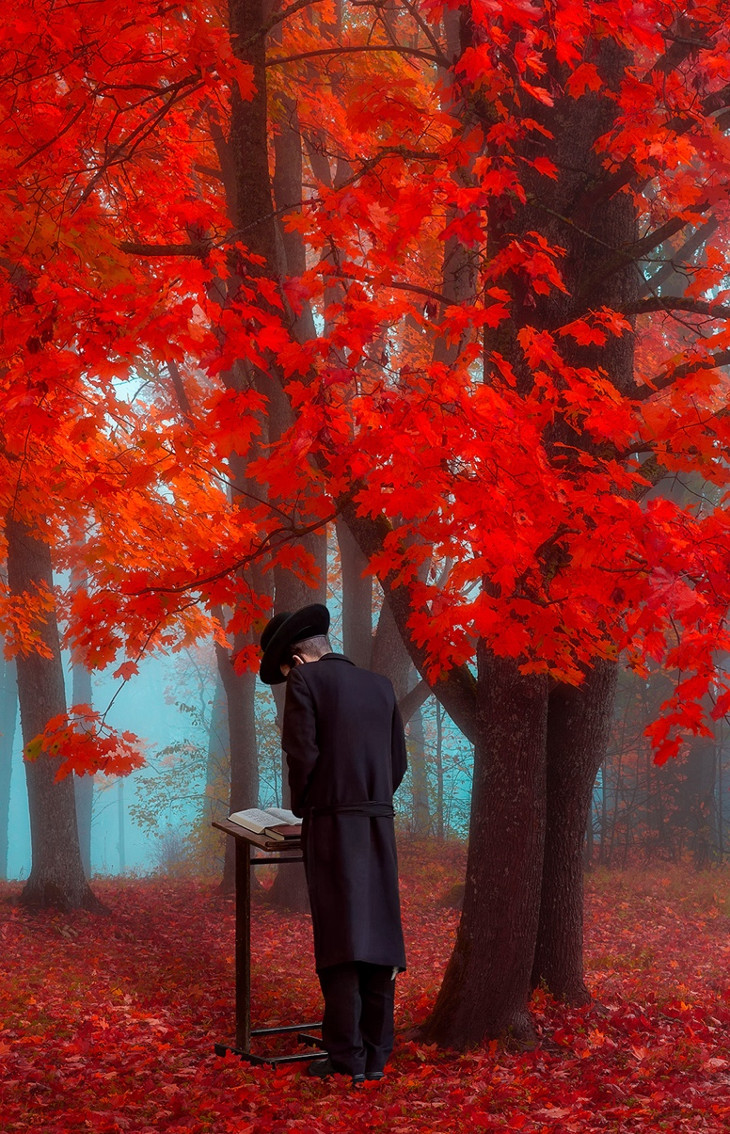 During prayer, I often imagine being surrounded by the colour red. The colour red (adom) is the colour of blood and is symbolically tied to life and vitality. The Hebrew word for blood (dam), is derived from the same root as the word for man (adam), and earth (adamah). The colour red is also mentioned in many instances of the Torah – from the Red Heifer to Esau’s complexion when he was born, and even Jacob’s lentil porridge. I wanted to show the enveloping red of prayer and decided to show this as a tall tree with red leaves. Trees, of course, have plenty of Jewish symbolism too, and here the tree rises high above the man in prayer, representing the immense knowledge that awaits. 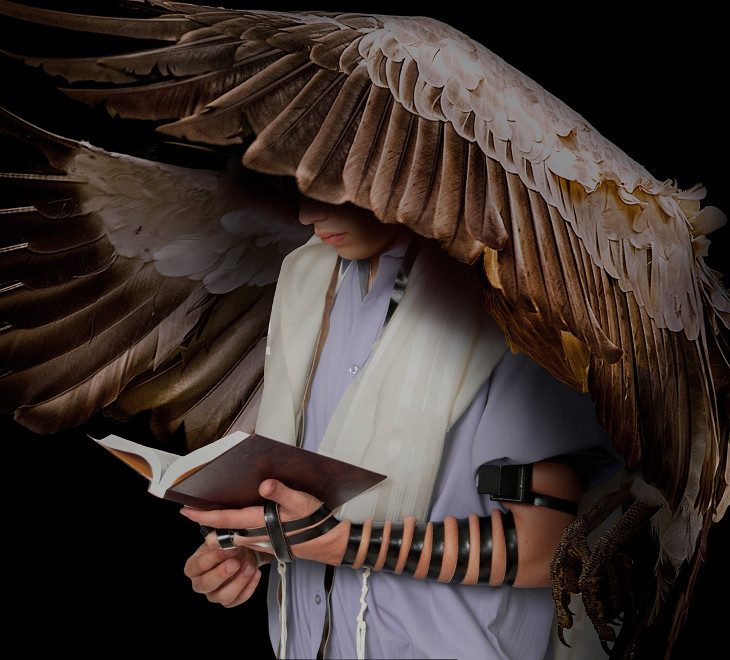 You saw that which I did to Egypt; and I carried you on the wings of eagles and I brought you to Me – Exodus 19:4.

While I always imagined the magnificent eagle, I did some further reading and a popular interpretation of this is that the “nesher” of the bible is quite likely the Griffon Vulture – Gyps fulvus. It is the largest of Israel's carnivorous birds, its outstretched wings sometimes attaining a span of ten feet. The image of a vulture in the place of an eagle was an exciting visual thought for me. As a wildlife photographer, I have always found vultures to be beautiful and strikingly powerful when they are in full flight. I can imagine the vulture’s expansive outstretched wings lovingly sheltering the children of God. 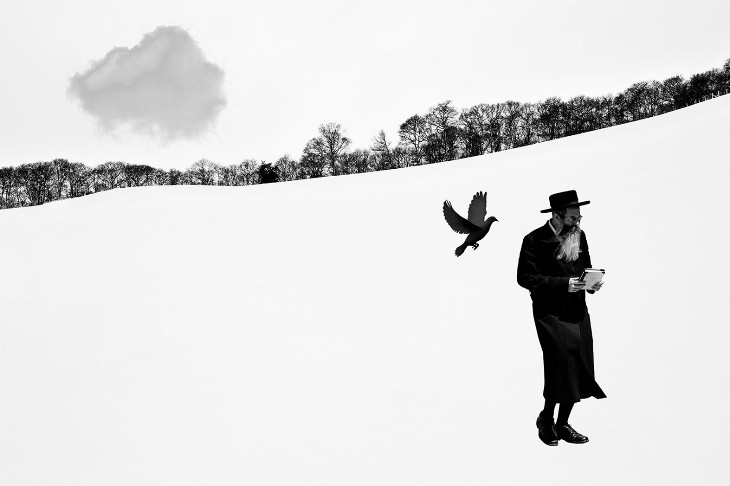 The Jew of Vilnius

Like most Jews of my community in South Africa, we can trace our recent lineage to the lands of Eastern Europe. I know that my great great grandparents were from Vilnius, Lithuania, where they were forced to flee from prosecution. But sadly, I have little further information about their lives. I can only use my imagination to recreate what life must have been like for them. Unsurprisingly much of the Jewish folktales from this part of the world are centered around the darkness of winter. I think of the cold bitter winters and how spiritually trying that must have been for them – so distant from my experience at the sunny tip of Africa. The Torah contains numerous mentions of snow, which is often used as a metaphor for purity. The Maharal of Prague, Rabbi Judah Loew, spoke of snow as “a vessel of spiritual light in the darkest days of the year”. When thinking of how I wanted to portray the snow of Vilnius, I thought of the Hebrew word for snow – sheleg – which has a numerical value of 333, the same as the word shich'cha, which means forgetfulness. I could imagine snow as being an all-enveloping whiteness – a total absence of colour and texture and sound. I could imagine the small figure of my great great grandfather against this barren landscape, and how incredibly important the Talmud must have been as a guiding light. 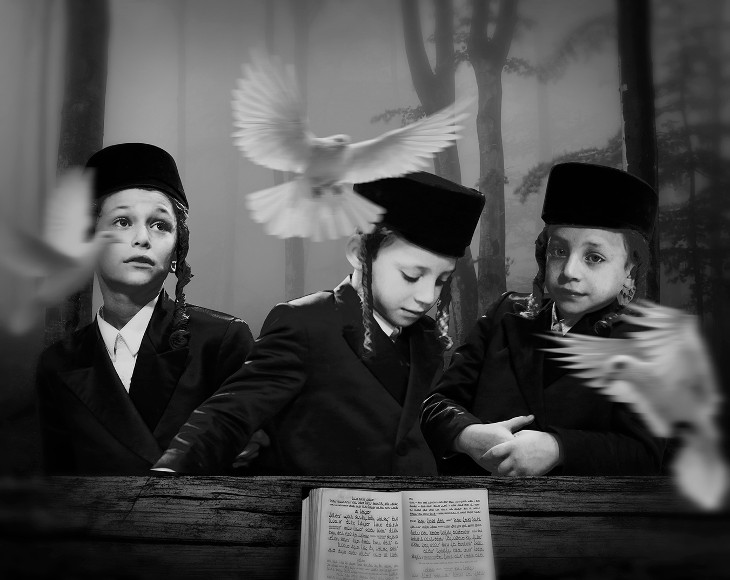 The Boys of Sabbath

Although Shabbat is a magical time for all ages, I believe it is especially enchanting for children. I was particularly excited at being privy to the weekly celebration with adults. Sitting at the candle-lit Shabbat table, surrounded by excited adult chatter made me feel grown up and included in the “bigger world”. Here I represent the three “faces” of the Sabbath as I remember it – wonder, learning and imagining. My visual device of birds (as I use regularly) have a dual symbolism: spiritually they represent the soul and a link to our past, present and future. Visually, the birds’ blurred movement is suggestive of a quiet, caught moment. I use doves (Yonah) as they were the only domesticated birds among the Israelites, so for me they form part of the

Charlotte Greenblatt is a Fine Art Curator from Cape Town, South Africa. She has a Master of Arts degree from the prestigious Michaelis School of Art and a Journalism degree from Rhodes University. Charlotte writes a regular arts column, Art Talk, in the Jewish Chronicle. In December 2019 she will curate Zvi Suchet’s first major solo exhibition at the South African Jewish Museum in Cape Town.

Matisyahu: Let Music be Your Flag

Harry Potter and the War Between Good and Evil

The Matrix Resurrected: A Philosophical Examination
Were Adam and Eve Jewish?
How I Learned to Love the Multiverse
10 Big Jewish Inventions
Comments