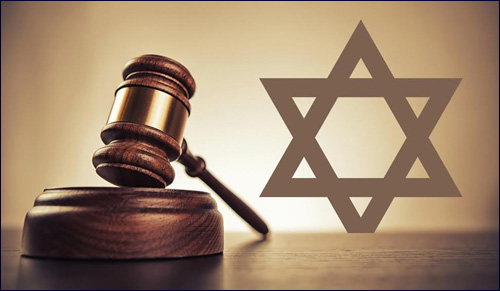 It’s time for We Jews to create our own legal system.

We Jews love laws. We have a rule, an opinion, a right and a wrong for everything from the use of poison to picking from a salad bar. After 3,000 years of the most brilliant minds, rabbis, philosophers, tailors, sitting, studying, and geshrie-ing over each possibility, We Jews need some congressman named Billy Bob from Bazooka, population 37 to tell us what we can and can’t do?

I say “Feh!” Especially, as U.S. law is mostly based on Roman Law, made by people who, in 70 C.E. destroyed our Temple, stole our treasures and had the chutzpah to show them off to their neighbors. And they should make laws for us?!

Having spent many years in the justice system, the fact that there are fewer Jews in jumpsuits than in law school, I asked myself, why don’t we create our own legal definitions? This we’re absolutely entitled to! Enjoy!

When a parent leaves a minor child without enough care, supervision, support, or contact for an excessive period of time. Examples might include:

Our law is a child leaving us without enough care, support, or contact for an excessive period of time. Minor or “major,” age is irrelevant. For this, they are expected to atone. Examples include but are not limited to the child’s:

2-Them: Burden Of Proof:

When one person in a case has the responsibility to give more evidence than the other person.

Us: Suspicion of Proof:

Only a yutz would wait for a burden. A burden means tsouris has already happened. What? We’re going to let a nasty neighbor with shifty eyes maybe put a match to our house so we can hand the judge 5000 pounds of ash-“burdens”? Or be poisoned by that shmeggege deli man who opened around the corner we heard was thrown out of the Lower East Side for having a heavy thumb with the lox? No. Suspicion is proof enough for intention-prevention.

A theory that says you buy things at your own risk from the Latin for "let the buyer beware." Simply, if you’re stupid enough to pay 3,000 dollars for an “antique” rug from a guy with a cart selling chazzerai you deserve to see that rug at Walmart for $15.65. It’s your fault.

It’s their fault. Period. We Jews don’t buy anything without looking, reading, researching, feeling, tasting, smelling, comparing. Allergy testing may be involved. The other day I got a full refund plus 10 coupons for pain and suffering from a supermarket because a piece of their rice got under my bridgework! Clearly, the rice was uneven. As We Jews are “aware,” the manufacturer should be “emptored” for trying to sell a Jew shoddy merchandise.

A judge's written explanation of the court’s decision on appeal. Only the majority opinion can be used as binding precedent in future cases. For example: “It is the opinion of this court that the complainant has not shown sufficient evidence” etc. etc.

Us: Matter of Opinion:

We Jews are masters of “the opinion.” Show me a Jew without one, whether a skirt is too short, or solving the Middle East crisis. We discuss, present oral arguments, holler, eat, walk out and then eat. We can turn anything into a debate of Talmudic proportion. Listen …

“That, you call an opinion? I spit on your opinion!”
“Your opinion doesn’t even rise to the level of ‘opinion.’”
“Only a nudnik would have the chutzpah to actually offer that opinion!”

Not only can’t a group of Jews get a majority, we can’t get a minority. Face it. The head of the shul has the only Jewpinion that matters. Right?

5- Them: Statute of Limitations:

A law that sets the deadline for parties to file suit to enforce their rights. For example, if a state has a 4-year statute of limitations for breach of a written contract, and "John," the girl’s boyfriend took Susan’s apps on January 1, 1996, Susan must file her lawsuit by January 1, 2000. If the deadline passes, the "statute of limitations has run out" and "Susan" may not be allowed to sue.

We Jews remember – and keep notes. We don’t know from time limits. On Pesach we’re still talking slavery! Does it become less an injury after 3000 years? Of course not. We Jews have learned never to forget. Face, it. People don’t change. If a distant cousin, Morty, called my daughter “zaftig,” spread the word, and my Sheila still can’t get a date with a respectable Jewish prospect, ten years later, may he Zol er krenken un gedenken. (Let him suffer and remember).

A legal paper that lists a person's wishes about what will happen to his or her personal property after death. For example, the wife gets half, and the rest is divided equally among the children.

Us: Maybe I Will:

One terrific bartering tool that works better than guilt. “You don’t care to visit once a week? Where’s my will?” “You’re changing your major from law to miming? Oy. I’m calling cousin Myron to look at my will.” We Jews need adjustable wills – written on a napkin, said in the heat of the moment to make it truly a “living will.”

Everything that a husband or wife owns separately.

Not familiar with this term.