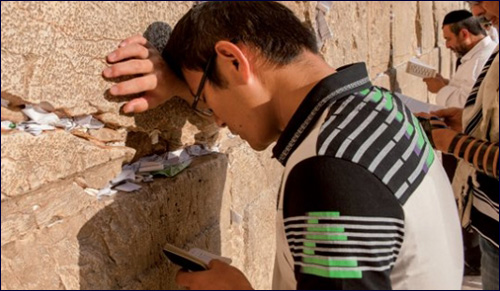 Fascinating facts about Jews and China.

In the Middle Ages, Jewish traders following the ancient Silk Road spice route settled in China, forming a community in the city of Kaifeng. Kaifeng was then one of the “Seven Ancient Capitals of China” and one of the world’s largest metropolises, with a population of close to one million. China’s ruling Song Emperors welcomed the Jews as welcome guests, bestowing seven family names that these Kaifeng Jews could use – some of which are still carried by their descendents in the town today.

Kaifeng’s Jewish community thrived at first, building its first synagogue in 1163, and eventually swelling to several thousand members. Smaller Jewish communities sprung up in other towns in China. Unlike many Jewish communities elsewhere, it seems that China’s Jews faced little or no persecution. Ironically, the lack of discrimination they faced in China seems to have hastened their end. 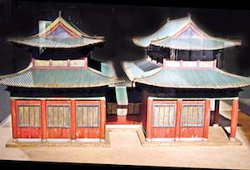 A model of the Kaifeng synagogue at Beit Hatfutsot, The Museum of the Jewish People, Tel Aviv

Within a few hundred years, the Jews of Kaifeng began to drift away from their religion. They intermarried with their Han Chinese neighbors and gradually lost their Jewish knowledge and traditions. When Kaifeng faced a devastating flood in 1642, its small Jewish community was able to recover and rebuild their synagogue. When Kaifeng was again heavily damaged by floods in 1841 – which wiped away the town’s sole remaining synagogue, among other buildings – the Jewish community never rebuilt.

When Elena Kagan, the Jewish law school professor who is now a US Supreme Court Justice, was questioned during her confirmation hearings, Senator Lindsey Graham (R-SC) asked her what she did on Christmas. Rather than be flustered by this unusual question, Kagan quickly quipped, “Like all Jews, I was probably at a Chinese restaurant.”

The link between Jews and Chinese food lasts year-round too. In 1959, a New York kosher restaurant, Bernstein’s on Essex Street, caused a sensation by becoming the first kosher restaurant to offer Chinese food when they put Chinese egg rolls on their menu. Over the years, kosher Chinese restaurants have opened in cities across the world. (Chicago offers a typical example: of roughly two dozen kosher eateries in the city, three have Asian menus, and many others include Chinese or pan-Asian selections as well.)

China is gaining an increasingly prominent role in kosher food production, too. It is now the world’s fast-growing producer of kosher food, with over 500 factories manufacturing kosher items. Star-K, a kosher certifier, reports that “China is fast becoming the frontrunner in all aspects of kosher food production” as more and more foods (including those that are kosher) are produced there.

What’s in a Name?

Chien His-chieh, the Executive Director of the Peacetime Foundation of Taiwan, has called for a radical change in the way some Chinese words are written. Specifically, she points out, the Chinese word for Jew, you tai, can be written with a variety of symbols – yet troublingly, the one used most often is demeaning, denoting dog or monkey. So far, Ms. Chien’s request has gone nowhere. It’s thought that the derogatory spelling originated at a time when Jews were considered extremely exotic or foreign to China.

The Hebrew term for Chinese is less controversial: Sini. It likely originated with the Chinese Ch’in, the fourth dynasty of China, and is related to the Greek and Latin words for China (Sinai and Sinae, respectively).

While a small Jewish community lived in Shanghai since the 1800s, Jews began to flock to that coastal city in the 1920s and 1930s, fleeing first from the upheaval of the Russian revolution, and then growing anti-Semitism in Europe. When the great powers, meeting at the Évian Conference in 1938, decided to block almost all Jewish immigration to their shores, only two places remained completely open to fleeing Jews: the Dominical Republic; and Shanghai (which at that time was governed separately from the rest of China).

In the late 1930s, over 20,000 Jews called Shanghai home; by the time World War II broke out, Shanghai was home to more Jewish refugees than any other city in the world.

After Japan’s invasion of Shanghai in 1941, Germany pressured Japan to murder the Jews in its control, even sending SS Colonel Joseph Meisinger (reputedly carrying a canister of Zyklon B gas with him) to Shanghai to advise various “extermination” plans. Japan resisted calls to murder the city’s Jews, but they did implement drastic new restrictions: Shanghai’s Jews were no longer able to receive aid money from abroad, and were crammed into the “Shanghai Ghetto,” more formally called the Restricted Sector for Stateless Refugees in the Hongkou District, where Jews were forbidden to leave. 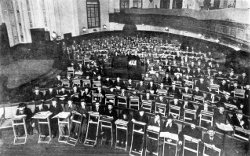 Even in these restrictive conditions, Jewish life in Shanghai flourished. Most notable was the Mir Yeshiva, a famous center of Jewish learning that relocated from Lithuania to Shanghai during World War II, and continued to offer classes. (Following the end of the War, the Mir Yeshiva moved to Jerusalem, where it remains one of the world’s premier centers of Jewish learning today.) Following the War almost all of Shanghai’s Jews left China for new lives abroad.

Each year, hundreds of Chinese graduate and post-doctoral students flock to Israel’s universities to participate in the world-class research at Israel’s universities. In 2013, Tel Aviv University and Beijing’s Tsinghua University set up a joint high-tech joint research center, tapping into Israel’s and Chinese know-how to bring new innovation to medical technology and to finding solutions to pressing environmental problems.

Interest in Judaism is rife in China. There are no fewer than ten academic centers of Jewish studies in Chinese Universities across the country, and students often spend a semester abroad, learning more about Jewish history and culture in Israel or the United States.

Perhaps the biggest boost to knowledge about Israel’s academic life in China came from a recent game show Who’s Still Standing, a Chinese quiz show based on a popular Israeli program. When Hebrew University graduate student Lechao Tang appeared on the Chinese show in 2014, he did so well the show became the second-most watched program in all of China. Tang regaled Chinese audiences with descriptions of life in Israel, while the show’s hosts chimed in with a story of their own. On a visit to Israel they once placed a note asking for help in conceiving a child in the Western Wall – when they returned home, they told their audience, they had a baby boy.

As China has emerged as a manufacturing dynamo in recent decades – and Israel has evolved to become one of the world’s foremost centers of high-tech innovation – links between the two countries have deepened. From virtually no high tech funding from China in the early 2000s, the period of 2011-2013 saw Chinese firms invest $32 billion in Israel.

Asia’s richest man, Hong Kong-based tycoon Li Ka-shing, seems to have a penchant for Israeli Research and Development; to date, he has invested in at least 28 high-tech companies in Israel. Of the startups funded by his company, Horizon, over one third is Israeli. Examples of Horizon’s funding include the Israeli firm Corephotonics, which designs dual-lens systems for cell-phone cameras, and the Israeli bio-tech firm Kaiima, which designs products to increase agricultural sustainability.

China now ranks second (after the United States) in collaboration with Israeli high-tech firms that are backed by Israel’s Office of the Chief Scientist. Economy Minister Naftali Bennett has described Israel as “going East” in terms of trade and R&D.

Trade between the Israel and China has skyrocketed: increasing over 20000% in the past two decades, to more than $10.8 billion today. After the United States and the European Union, China is now Israel’s third-largest trading partner.