Jewish Cheerleader in the Bible Belt 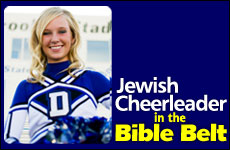 My evangelical coach made me discover what it means to be a Jew.

Growing up in the Bible Belt, I relished the opportunity to say "I'm Jewish, and I love it." Of course it was all a front. I was very embarrassed not to wear a cross; I desperately wished that we could have been just like everybody else. Because I had no idea how to answer all of the questions about JC, why we don't believe in the New Testament, and why we went to synagogue on Saturday instead of Sunday, I put on the best performance about how great being Jewish was.

Until high school, my Jewish pride had never really been challenged. Except for the occasional fanatic who insisted that I would burn in hell, things were generally pretty calm.

I remember the day that it all changed so clearly. Cheerleading practice began like any other: rehearsal of dance routines, me being thrown into the air in a stunt, and a lot of overly confident teenage girls arguing. Then came the water break. We were all sitting around chatting, when our evangelical coach piped up.

"Girls, I want to tell you something. Not nearly enough of you have been attending the student athlete church service, the meet you at the pole prayer group, or the Federation of Christian Athletes events."

Something inside of me started to stir.

"Now, I don't want to have to keep reminding you ladies. Church involvement is essential to the success of the football team."

My discomfort turned to anger.

"All of the Varsity squad has been going, and look how good their team is doing."

The frustration was mounting.

"Reverand Smith will be at lunch in the cafeteria --"

The words jumped forth from my throat without my control...

"Coach Turner, I don't think this is any of our business. You're way out of line. Just leave us alone about your Church. We have the right to go or not go." My heart was pounding with nervousness and anger.

Before I could finish, she put up her hand, signaling me to finish.

We all paused and then the captain broke in, "Why don't we all go get some water in the main building."

As I walked toward the building, my adrenaline was still contorting and the perspiration was dripping down my temples.

Good for you , I thought to myself. That should finally keep her quiet. But what's the rest of the squad thinking?

One by one, my peers padded me on the back. "Way to go, Lauren. I am happy you said something. You go girl."

They were all on my side. Little did I know that those words would soon mean nothing and that within a week I'd find myself fighting the entire school.

After practice Coach Turner approached me. "Don't worry Lauren, I forgive you. I won't kick you off the cheerleading squad, but I have discussed this incident with the head coach and you only need to serve three detentions for your blatant insubordination."

Overnight, I went from one of the most popular cheerleaders to borderline pariah.

I refused to serve the detentions, triggering a spiraling descent of back and forth between myself and the coach who was forcefully trying to maintain her control of the squad. She finally issued an ultimatum: either I serve the detentions or she – the most beloved coach – will quit.

The calls started coming in. One by one, my peers who I thought were my best friends started mounting pressure. "Come on Lauren, really it's no big deal. Just serve the stupid detentions. You know you were being a little disrespectful to Coach Turner. We're in the middle of the season and can't afford to lose her."

Suddenly teachers, parents, football players, and administrators started treating me like a total outcast. Dirty looks, rude comments, and the cold shoulder were some of the tactics they used to get me to back down from my position.

I was dumbfounded. These were adults, and I was 15. No one seemed to take my feelings into account. Overnight, I went from one of the most popular cheerleaders to borderline pariah.

The most painful slight came from the family of the only other Jewish cheerleader. With the mom's money and help, her two kids had risen to top of the social ladder, and she was determined not to let me undermine her vision. She had slyly convinced all of the other cheerleading parents that this was not about religion; after all, I didn't even have a Bat Mitzvah like her daughter had.

My parents instilled in me abundant Jewish pride, but deep down there was a vacuum in place of knowledge.

But the most challenging thing was the internal questions I could not answer: "Why did I care so much about my religion anyway? What's really the big deal about going to a church once in a while? Don't we all believe in the same God and the same Bible?" My parents were very proud Jews and instilled in me abundant Jewish pride, but deep down there was a vacuum in place of knowledge.

The showdown came a few weeks later, with the help of the local ADL and my parents. The coach brought me to the principal's office in an attempt to force me to either serve the detentions or be dismissed from the cheerleading squad. Despite all the vicious attacks against me, I proudly articulated my position as eloquently as I could. Thankfully, the principal was African-American who was particularly sensitive to minority rights, and he agreed that I should not be forced to serve the detentions.

It was a short-lived victory. Coach Turner quit the squad that afternoon and everyone blamed me.

I was bombarded with emotions: proud, angry, hurt, betrayed, confused. I felt an incredible burden of responsibility that I didn't ask for, but was something that I inherited from every generation of Jews that preceded me. Of course, Jews in previous generations suffered infinitely worse persecution to maintain their identity. But in the heat of that teenage moment, my life seemed quite dramatic: a reform Jewish cheerleader in the heart of Georgia defending her right to maintain a Jewish identity free from persecution and persuasion.

Coach Turner did indeed quit, but the football team went on to win the championships without her there to pray for us, and the cloud of controversy surrounding me eventually settled down. My cheerleading career came to an end after it was hinted to me that I shouldn't bother trying out for the Varsity squad the following year; my position on the squad had already been replaced. I decided to take up journalism the next year, find a new crowd of friends, and start taking school seriously.

But those nagging questions that I couldn't answer would not be quieted. Why does being Jewish really matter anyway? Why not simply follow the crowd? I began my quest for understanding what it means to be a Jew. Instead of following all my friends to the University of Georgia, I made the courageous decision to attend Emory University which had a very active Jewish life. It would be my first time having a chance to get to know Jewish peers. I felt I was on the cusp of an exciting discovery.

In the first semester of my sophomore year, I enrolled in a Holocaust Studies class taught by renowned author and historian Deborah Lipstadt. Having just returned from her famous trial with Holocaust denier David Irving in England, the course was very popular, filling a very large auditorium with a few hundred mostly Jewish students.

I watched and read about the horrors of World War II in extremely graphic and shocking detail, and I was deeply affected.

I remember leaving the auditorium one freezing day in November, sitting on a bench and crying, "How dear God could You have allowed such senseless misery, such torture to so many innocent souls?"

A few of my friends came over to me. When I told them why I was crying, their response shocked me. "Move on, Lauren. It's over. We have a social to get ready for tonight. I know you're sensitive, but nothing like this will ever happen again."

But I couldn't just "move on."

I almost wished for a second encounter with Coach Turner.

I decided to take a UJC college mission trip to the Ukraine and Israel for winter break. I came back very inspired, dedicated to raising money and awareness for their cause. I felt different. Sorority life began to feel surreal and superficial.

Following Prof. Lipstadt's recommendation, I went to Hebrew University in Jerusalem. I finally began to ponder some of those nagging questions and discovered I was in the best place to seek out a wide range of answers. All of Jerusalem seemed to be teeming with Jewish students struggling with the ultimate issues: What is our purpose here? What does it mean to be Jewish? Why is it so important that the Jewish people not assimilate? How can I truly make the world a better place?

That vacuum inside of me began to slowly fill with knowledge based on Jewish learning and growth. I almost wished for a second encounter with Coach Turner.

Today I am married to a rabbi, and we are dedicated to working together to make the world a better a place, to do as much good as we can, and take care of as many people as possible, starting with our children, our community and the whole world.

Gevura currently lives in Kansas City, KS, where her husband is one of the founding members of the Community Kollel. She spends most of her time with her three young children and utilizes her spare time developing marketing and design material for the Kollel and facilitating Jewish parenting groups.

I Couldn't Figure Out Why I was Overeating
Chukat 5782: Let’s Play the Blame Game!
The Sin of Moses: The Two Ways to Communicate
In Aftermath of Chicago’s July 4th Shooting, Local Moms Provide Countless Points of Light
Comments
MOST POPULAR IN Spirituality
Our privacy policy