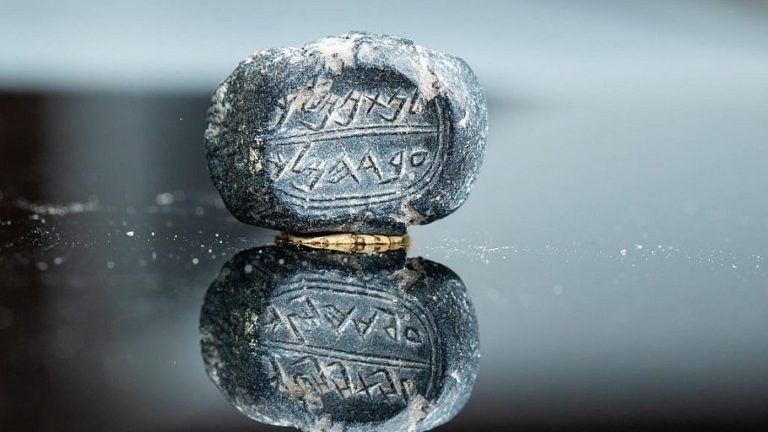 The tiny clay impression dates back over 2,600 years and bears the name, mentioned in the Bible, of a royal aide to King Josiah.

“Quick! Come and see this!” an excited voice yells out to around 20 crew members painstakingly sifting through layers of, rock and earth. “I’ve found something!” This is the incredible moment when a stunned archaeological team digging under a car park in the Old City of Jerusalem unearthed one of the most significant archaeological finds of recent years – an official stamp baring the name of a senior official of the Royal Court of ancient Judah.

The tiny clay impression dates back over 2,600 years and bears the name of a royal official known as Natan L’Melech meaning ‘Servant to the King’ who is mentioned in the Bible, an aide to the Judean King Josiah in the 8th Century BCE.

Under the auspices of the Israel antiquities authority, the dig is taking place 40 feet under a former car park at the City of David archaeological heritage site.

“This is not just another discovery,” Professor Yuval Gadot, 51, the Head of Archaeology at Tel Aviv University, who is leading the dig, told Aish.com. “We are talking about the cradle of civilization and a highly significant item which bears the name of a specific individual.” The seal is the first archaeological evidence of the biblical name Nathan-Melech. Gadot added, “This official was so high profile he is not referred to using his father’s name. There was no need. We are talking about someone who everybody knew.”

In addition, another bluish agate stone seal known as a bulla was also found with the inscription ‘belonging to Ikkar son of Matanyahu.” Gadot said, “It is a very beautiful stone, and the Hebrew is so clear.”

He added, “The big story here, is the context, with both the seal and the bulla were found in the same building. As we are digging, we are seeing that this was a central part of Jerusalem at the time, busy with administrative activity and also close to the temple mount.”

He added, “Life as an archaeologist can be pretty quiet at times, with hours, days and weeks often passing without finding anything.” The day the seal was found, Gadot was paid a visit by an archaeologist colleague from Los Angeles. “Come here and see what we have just unearthed,” he said, bringing him to see the seal. “He didn’t know what to say.”

Highlight of his career

“Without a doubt,” Gadot said, “digging at the City of David site in Jerusalem has been the highlight of my 30-year career. The past matters. Jerusalem is the cradle of civilization and it touches everyone.”

“It’s an exciting time to be an archaeologist,” he added. “There is so much more to be still be exposed.”

Doron Spielman, Vice President of the City of David, shared his reaction with Aish.com after holding the tiny clay seal in his hand. “What is so striking,” he said, “is that it is smaller than a thumbnail, it weighs almost nothing, but its importance is diametrically opposite to its size.”

“There are so many people who think this book (the Bible) was made up and seek to erase Jewish history in Jerusalem, yet here we find the stamp of the seal of the servant of the king.”

“One of the reasons Jews have held onto their faith, across thousands of years, is because they have felt a connection to a constant chain of tradition. Who in the world today can dig 40 feet under the ground where you live and unearth something over 2500 years old, in your native language that appears in the book that you read? We are so unique, and no one else has this gift.”