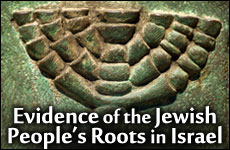 The vast array of evidence is overwhelming and incontrovertible.

On Sept. 24, the president of Iran informed reporters that Israel has "no roots there in history" in the Middle East. Now a lot of good jokes come to mind at the expense of this clueless man, but, seriously folks, he has at least conveyed an important truth: he recognizes that Israel's historical presence in that world since antiquity matters – matters enough to deny it.

Now, the Bible pictures an Israelite-Jewish population and government there starting in the 12th century BCE and continuing until the end of the Bible's history about 800 years later. But how do we know if this is true? As scholars, we can't just say, "The Bible tells us so." We need to see evidence that could be presented to any honest person, whether that person be religious or not, Jewish or Christian or from some other religion or no religion, or from Mars.

There are thousands of Hebrew inscriptions discovered all over the country.

In the first place, the land is filled with Hebrew inscriptions, so I begin with that. These are not just an occasional inscription on a piece of pottery or carved in a wall. Nor should we even start with one or two of the most famous archaeological finds. Rather, there are thousands of inscriptions. They come from hundreds of excavated towns and cities. They are in the Hebrew language. They include people's names that bear forms of the name of their God: YHWH. This means names like:

The inscriptions also refer to their kings. They include stamps and seals from official documents. They come from tombs where that land's people were buried. They name people who are mentioned in the Hebrew Bible. They include wording that also appears in the Hebrew Bible. They reflect a widespread community whose dominant language was Hebrew, who didn't eat pork and who worshipped a God named YHWH.

I happened to be present at the time of the discovery of another important inscription in Jerusalem. Right below the Church of Scotland in Jerusalem, in a Jewish tomb from the seventh century B.C.E., was a silver cylinder with the words inscribed in it:

"May YHWH bless you and keep you. May YHWH make his face shine to you and give you peace."

It is the words of the Priestly Blessing in the Hebrew Bible (Numbers 6:24-26). That's just one inscription. The distinguished scholar Jeffrey Tigay of the University of Pennsylvania sums up: "The names of more than 1,200 pre-exilic Israelites are known from Hebrew inscriptions and foreign inscriptions referring to Israel." Of these, 557 have names with YHWH as their divine element, 77 have names with El.

Everybody knew that Israel was there: Egypt, Persia, Assyria, Babylonia, et al.

As for those foreign inscriptions, texts from the neighboring lands refer to the people, to their kings, to their government, to their armies and to their cities. The basic fact: everybody knew that Israel was there: the Egyptians, the Assyrians, the Babylonians, the Arameans, the Moabites, the Persians. Pharaoh Merneptah (1213-1203 B.C.E.) refers to the people of Israel in a stone stele. Pharaoh Shoshenk I (c. 945-924 B.C.E.) describes his campaign in which he refers to cities in Israel (including Ayalon, Beth-Shan, Megiddo, Rehob and Taanach).

Assyrian King King Shalmaneser III names King "Ahab the Israelite" among his opponents in his Kurkh monument and names and pictures King Jehu on his Black Obelisk. Seven other Assyrian emperors also refer to Israel and Judah and name kings who are also mentioned in the Bible. The Babylonian sources, too, refer to the Jews and their monarchy in the years after the Babylonians replaced the Assyrian empire.

And the record continues when the Persians replace the Babylonians, as documented in the Cylinder of Cyrus, the Persian emperor. Cyrus' decree in 538 B.C.E., let the exiled Jews return to their land; it was followed by an influx of Jewish population. There was population growth from the reign of Darius I to Artaxerxes I. The country that the Babylonians had conquered was reestablished as a state of Judah (yehud medintha) within the Persian umbrella. You want irony? Persia, now called Iran, the country that re-established the Jews' country in biblical times, now has a president who says that Israel has no roots there.

Closer to home, right across the Jordan River from Israel was Moab, in what is now Jordan. In the ninth century B.C.E., its King Mesha erected a stele referring to Israel and its King Omri. He also refers to the royal House of David. An inscription erected by an Aramean (what is today Syria) also refers to a king of the House of David. In all, these ancient texts refer to 15 kings of Israel and Judah who are known from the Bible, and all are referred to in the right periods.

Material culture (in other words: stuff) fills out this picture. Thousands of people have now walked through the Siloam Tunnel under Jerusalem. It is a major feat of engineering. It is a passage nearly six football fields long underground. A tremendous project like this and others that we shall see reflect a major organized society with a government that could bring such an undertaking off.

If it were done today, the governor would be there for photo opportunities, and the architect and builder would be honored. When it was done 2,700 years ago, it took a substantial number of workers and tremendous cost.

Likewise, when my students joined in the City of David Project archaeological excavations of Jerusalem under the archaeologist Yigal Shiloh, they uncovered the now visible "stepped stone structure." Whatever purpose it served – defense, soil or water retention, a platform for some other major structure – it was a huge project. It wasn't something that a couple of friends assembled. It required community organization, planning, design, a large number of construction workers and funding.

The archaeologist John S. Holladay, Jr. thus speaks of the "archaeologically discernible characteristics of a state" from the 10th century B.C.E. on. These include a pattern of urban settlements in a hierarchy of size: cities, then towns, then villages, then hamlets. They have primary seats of government (i.e., capital cities): Jerusalem and Samaria. Then they have major cities as regional centers: Hazor, Megiddo, Gezer and Lachish. They have centralized bureaucracy.

They have frontier defenses. They have standing armies. They have economics based on tribute, taxes and tolls. They have a writing system. Holladay lists all of these and more in showing how we know that there was a populous society with a central government from this early stage of the biblical period.

Holladay published this in 1995. We can now add more: central planning of the architecture and layout of towns, a distinctive alphabet, standard weights and measures. And we can add that the Israelite sites lack pork bones. The archaeologist Elizabeth Bloch-Smith seconds the point, that the material culture is clearly Israelite starting from the Iron II period (950-600 B.C.E.) at the latest.

We can also see the changes in the Hebrew scripts on the inscriptions developing through time, and we can actually date texts based on this. (An eighth century letter aleph doesn't look the same as a seventh or sixth century aleph.) The study of these scripts and the inscriptions is called epigraphy. Many biblical scholars go through training in this field. The point is that this doesn't happen overnight. It takes centuries for these scripts to go through all these changes. So (1) we can date texts, and (2) we know that the Hebrew of these inscriptions was the language of the people of Israel and Judah, not just for a year or a decade or a century, but for many centuries.

In parallel, we can trace the development of the Hebrew language as found in the Bible and the other ancient texts. We didn't move from Shakespearean English to Valley Girl English overnight. That takes centuries. Likewise, the Hebrew of the Song of Miriam and the Song of Deborah is different from the Hebrew of the late book of Nehemiah. Hebrew existed as a language that went through all the natural stages of development that we find in any language that people continuously speak and write over very long periods of time.

Evidence was assembled by hundreds of archaeologists, with tens of thousands of workers from many religions and countries.

The point of this is how vast the array of the evidence is. This is not a vague hypothesis. It is not formulated by overestimating or overinterpreting a single little find. It is not like an Indiana Jones movie (though we love them), in which the archaeologist goes looking for a single object. This is a civilization: between 400 and 500 cities excavated, hundreds of years, thousands of items in writing, millions of people. This evidence was not discovered by an individual or even by a small group. It was assembled by hundreds of archaeologists, with tens of thousands of workers, coming from many religions and many countries.

Some archaeologists hoped to confirm the Bible. Some seemed to take pleasure in throwing the Bible into doubt. There have been frauds, and there have been mistakes, aplenty, as in any other field. But the mass of the evidence remains available to all. We can see and continually refine a picture of ancient Israel.

We can (and do) have a million arguments about almost every aspect of the Bible. But what we cannot deny is the existence of the world that produced it. That fact is not true just because the Bible says so. It is true because practically everything says so.

We don't all agree on matters relating to the present politics of Israel and its neighbors. That's okay. It's even healthy. But let no one repeat this nonsense about Israel not having its historical roots there. One cannot understand the Jews or Israel if one displaces the first 1,000 years of their history.

Theodor Herzl: The Zionist Dream of a Jewish State
Dr. Sheila Nazarian’s Escape from Iran
The Miami Boys Choir is Taking over TikTok
Caramelized Onion and Pumpkin Pirozhki
Comments
MOST POPULAR IN Israel
Our privacy policy
Aish.com Is Looking for Great Writers