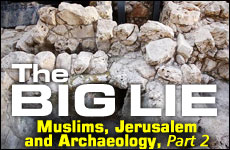 Millennia of artifacts with Hebrew inscriptions prove the Jewish presence.

Part one of this article examined how various Arab and Muslim leaders have tried to dismiss the deep historical Jewish connection to Jerusalem and the Temple Mount – despite the mass of evidence confirming that connection. In this article, we explore further aspects of this millennia-old relationship between the Jewish people and their holy city.

It is a given that any Hebrew-language inscriptions dating back to antiquity are evidence of a Jewish presence. Hebrew was introduced to the world by the Jews through the Bible, and has been the official language of the Jewish people – and only the Jews – for the past 3,300 years. 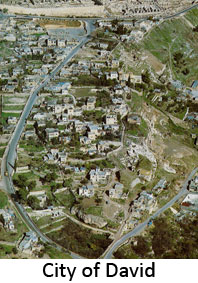 To the south of the Temple Mount is a long, downward, sloping ridge which archaeologists call Ir David, the City of David. Thousands of artifacts have been found there dating back to the Biblical Era. Fortification walls, foundations of monumental buildings, fragments of jars, tools, and other items all attest to the ancient occupation of the area.

Arabs have claimed that these finds are from the ancient Arab occupation of the city and has no connection or relevance to the biblical Hebrews who, in their view, never lived in Jerusalem. In order to show the fallacy of that claim, we must produce finds that are unquestionably Jewish and biblical.

1) Dozens upon dozens of clay seals have been unearthed in the area bearing the stamp of Hebrew names written in paleo-Hebrew. Many of the names are found in the Bible and two names are unequivocally identified as specific biblical characters: One seal, bearing the unusual name of Gemariah ben Shafan, is identified as an official of that same name in the court of the Judean King Jehoiakim. Another seal also bears an unusual name, Gedaliah ben Pashur, an official in the court of the last king of Judah, Zedekiah. 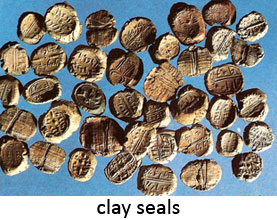 2) Several dozen jar handles bearing the word Hebrew word Jehud (Judah) have been found in the City of David. Jehud was the name give to the Holy Land during the time of Ezra and Nechemia.

3) A jug handle was found northwest of the City of David with the Hebrew inscription Yerushalayim, Jerusalem. The Arabic name of the city is not Yerushalayim, but rather al-Quds. 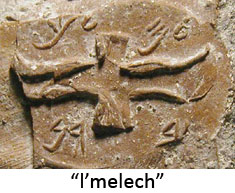 4) In ancient times, government taxes consisted of grain, wine and oil. These were collected in a large jugs with the Hebrew word l’melech (“to the king”) carved into the handle. A number of l’melech handles were found in the City of David.

5) A famous architectural feature of the City of David is the water tunnel that goes beneath the ridge, conducting water from an underground stream to the Pool of Siloam at the southern tip of the slope. Most historians and archaeologists regard this as the water channel created by King Hezekiah to thwart the Assyrian siege, as mentioned in the Bible (Isaiah 8:6). 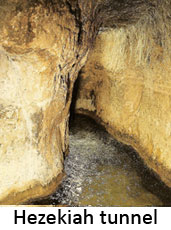 Two teams of ancient tunnelers worked on the project – one team in the north and the other in the south (see Isaiah 22:9). Miraculously, they met in the middle. When the laborers completed the digging of the tunnel, a commemorative description of the feat was engraved into the wall at the southern terminus of the tunnel.

The plaque, written in paleo-Hebrew, was discovered in the late 19th century. It was cut from the wall and carted off to Turkey; the Holy Land was part of the Turkish Ottoman Empire at the time, and it remains in the basement of the archaeological museum in Istanbul.

6) A synagogue dedication plaque has been unearthed in the City of David. It is written in Greek, the language of the city during the Hasmonean era, and mentions the community members who built the synagogue. 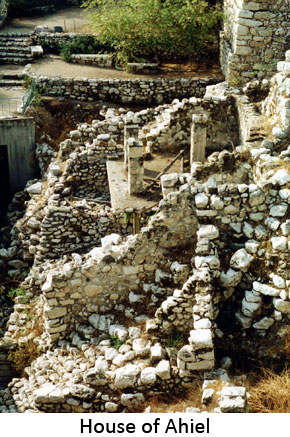 7) Hebrew University professor Yigal Shiloh uncovered a house in the City of David opposite the Kidron Valley. It is the most complete house excavated to date within the city of Jerusalem. It is known as the House of Ahiel because it contained a pottery shard with the Hebrew name Ahiel scratched on it. The house was burned during the Babylonian destruction of Jerusalem in 586 BCE.

It is significant to note that there are only two, relatively small, Muslim cemeteries in Jerusalem. One is found along the eastern wall of the Temple Mount and the other is adjacent to Independence Park in the Rechavia district. 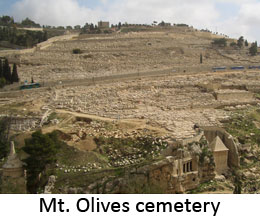 1) From biblical times until today, Jews have been buried on the Mount of Olives. There are an estimated 150,000 Jewish graves there – great rabbis and humble Jews alike. These tombstones silently attest to the historical presence of the Jewish community. Burials were halted there in 1948 and in the subsequent 19 years of Jordanian rule, 40,000 Jewish graves were desecrated. After the Six Day War, restoration work began and the cemetery was re-opened for burials. 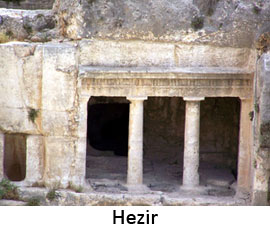 ) Aristocratic families and the wealthy had their own private burial vaults carved into the sides of the valleys. The biblical, priestly clan of Hezir (see Nehemiah 10:21 and 1-Chronicles 24:15) had its family tomb in Jerusalem’s Kidron Valley – identified by the ancient Hebrew inscription above the entrance.

Three other ancient family vaults are nearby, but only part of the Hebrew inscription remains, not enough to identify the families but enough to ascertain its Jewish nature.

3) On the western slope of Mount Zion, a sealed burial vault was discovered in 1975, dating to the First Temple era. Inside were the remains of dozens of skeletons. Next to one of the remains, a Hebrew seal was found, naming one of those interred – Chamiahel Bat Menachem.

4) Across from Mount Zion is a slope known in modern times as Ketef Hinnom. About 30 burial caves are found there. One vault contained two silver amulets, engraved in ancient Hebrew with the Priestly Blessing (Numbers 6:24-26).

5) The burial vault of the Jewish queen Helena is located north of the Old City of Jerusalem. It is improperly called Tomb of the Kings. It dates back to the beginning of the Common Era and is identified by Hebrew engravings that were found inside the tomb. The contents of the tomb are presently in the Louvre in Paris. 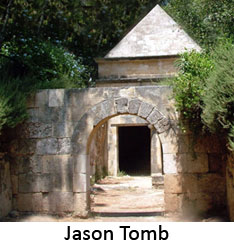 6) In the Rechavia section of the New City is the Tomb of Jason. It dates to the second century BCE and is identified by its Hebrew inscription.

7) In ancient times, after an interred corpse had decomposed, the remains were placed into a stone coffin called an ossuary. Often, the name of the deceased was scratched onto the side of the ossuary. Numerous ossuaries have been found bearing Hebrew names, including Shimon the Temple Builder, Abba the Priest, Yehochana daughter of Yochanan son of Taflus the High Priest, and Yehosef son of Kaifas. 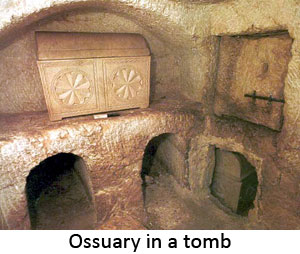 8) Tombs containing ossuaries bearing Hebrew inscriptions have been found all around the outskirts of the Old City of Jerusalem – in Katamon, Rechavia, Arnona, Siloam, German Colony, Mount Scopus, Givat Hamivtar, on Malchei Yisrael Street, and in the area known as Akeldama.

9) Often, the Jewish association with a burial vault can be ascertained by the presence of a nearby mikveh. The burial vault commonly called the Herod Family Burial Cave, located behind the King David Hotel, has a mikveh a few meters away from the entrance.

12) In 1991, the Israel Antiquities Authority found a cluster of four adjacent vaults on the slope of Mount Scopus. Twenty-seven ossuaries were found, several bearing Hebrew writing, and a mikveh was found in one of the vaults.

All of the above burial chambers contained fragments of pottery and/ or coins that can safely be dated to the first or second century CE.

The evidence of Jewish post-biblical presence is too voluminous to mention here, but it is interesting to mention three extant structures which prove a continuous Jewish presence in the Jewish Quarter of the Old City.

• The Ramban Synagogue was founded in 1267 by Nachmanides and is still in daily use now.

• The Rabban Yochanan ben Zakai Synagogue was founded in the 16th century.

• The “Burnt House” of the Bar Katros family is identified by a stone weight carved in Hebrew with the family name, Bar Katros. The family is mentioned in the Talmud (Pesachim 57a) and their home was set ablaze by the Romans in 70 CE.

To reiterate, the purpose of this article is not to prove anything other than satisfy an intellectual curiosity as to the historical and archaeological indications of a Jewish presence in Jerusalem from biblical times until the present. The real proof is found in the passages contained in the volumes of the Prophets and in the tear-stained pages of the Hebrew prayer book. They contain the history of our Holy City and its glorious Temple. They tell of its heart-rending destruction, and of our 2,000-year-long yearning for its rebuilding and for the day of universal peace.

The Jewish People’s Connection to Israel
Chukat 5782: Let’s Play the Blame Game!
The Sin of Moses: The Two Ways to Communicate
In Aftermath of Chicago’s July 4th Shooting, Local Moms Provide Countless Points of Light
Comments
MOST POPULAR IN Israel
Our privacy policy