Jerusalem, Ben-Gurion and Hanukkah: Is the Date More than a Coincidence? 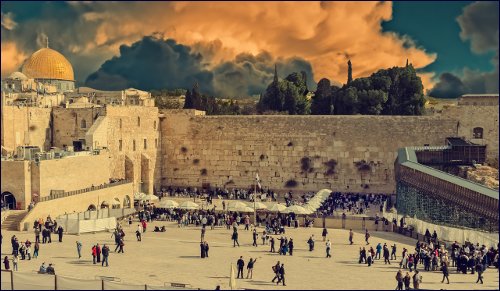 When major events occur on identical dates, God is winking at us.

Last week the entire world was stunned by the announcement that the President of the United States officially kept his campaign promise and recognized Jerusalem as the capital of Israel.

But when I looked at the Hebrew calendar I realized something far more profound than a political statement. Rabbinic scholars long ago taught us that with the end of prophecy, after the close of the Bible, God has another way in which to communicate with mankind. It is by way of the secret of time – the linkage of events occurring on exactly the same date that makes clear we are meant to understand divine messages. Coincidence, it’s been famously said, is God’s way of choosing to remain anonymous. In other words, it’s God’s way of testing our ability to concede the Almighty’s role in directing the remarkable twists and turns of history.

I’m certain that the President did not know the momentous significance of the day on which he chose to proclaim the historic change of America’s policy with regard to the status of Jerusalem.  In Israel, it was the night of the 19th of Kislev when the United States finally acknowledged what King David thousands of years ago sanctified and what the Jewish people never failed to forsake in their daily prayers. And it was on this very same day, the 19th of Kislev, in 1949, that Prime Minister David Ben Gurion– just one year after the establishment of the State – wrote and subsequently announced that the government of Israel had unanimously agreed that Jerusalem would be the one and only capital of the state of Israel.

The idea of the seemingly coincidental confluence of events on precisely the same day suggesting divine involvement has a precedent with another major moment in Jewish history –also linked to the month of Kislev as well as to Jerusalem.

Hanukkah begins on the 25th of Kislev. A number of commentators point out that the name chosen for this holiday hints at the significance of the date on which it occurred. Hanukkah is composed of two Hebrew words: Hanu – Hebrew chanu, they rested, i.e. they completed their task of re-conquering the temple –chaf hey, the letters for the number 25, i.e. on the 25th of the month.

What makes this date so special? The Maccabees fought the battles but it was God who, behind the scenes, saw to it that success was finally achieved on the 25th of Kislev – the exact same day when construction of the second temple had commenced years before, as evidenced in the prophetic book of Hagai (Chapter 2:10, 15 and 18). And when the Syrian Greeks, in their efforts to eradicate Judaism, defiled the temple with idols, pagan sacrifices were not offered in the temple until – yes, you guessed it – the 25th of Kislev (See I Maccabees 1: 54 – 59).

It was three years later that the Jews re-conquered the temple, cleared it of its idols, rebuilt many of its vessels, and finally – by divine “coincidence” – fulfilled the mitzvah of relighting of the menorah on the 25th of Kislev with oil that seemingly appeared to be sufficient only for one day but miraculously lasted for eight.

The sanctity of Jerusalem was preserved through the miracles of Hanukkah. God’s role in the story is confirmed in the very name of the holiday which reminds us that the message of time – the seeming coincidence of the identical dates on which major events occur – is a way in which the Almighty continues to communicate with us and to reveal his ongoing involvement in the history of our people.

The divine call is clear. Isaiah’s vision for universal peace appears prominently on a wall outside of the United Nations : “He will judge between the nations and will settle disputes for many peoples. They will beat their swords into plowshares and their spears into pruning hooks. Nation will not take up sword against nation, nor will they train for war anymore.”

Starkly and prominently absent are Isaiah’s concluding words: “For from Zion shall go forth Torah and the word of the Lord from Jerusalem.”

In the month of Hanukkah we have hopefully begun the process of turning that complete prophecy into reality.