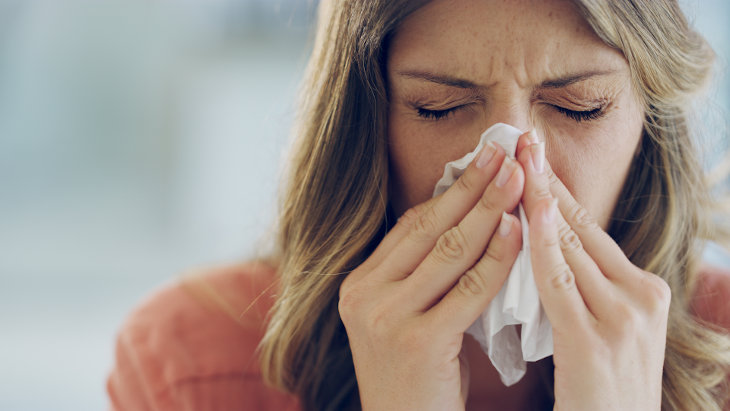 When my phone started blaring the emergency alert informing me about the new “stay-at-home” order from California Governor Gavin Newsom, I was busy having several out-of-kilter bones in my spinal column professionally yanked back into position by my chiropractor, Dr. Dan, who was masked and face-shielded as always. I was breathing my own stale breath through my mask as I lay face down on the sanitized and paper-shrouded treatment table. Other than sneaking out to Dr. Dan for regular adjustments, I had beat the governor to the punch, having ordered myself to stay at home days earlier.

You see, I had caught a cold. No, I didn’t say COVID, I said a COLD. Notice the different spelling, different number of letters, and different number of syllables. But what use is explaining? These days, there is no such thing as an innocent, minor health malady, and certainly no such thing as a harmless sneeze. Anyone who has tried to softly clear her throat in public over the last ten months, let alone commit the crime of sneezing anywhere outside a sealed room, is stared at with dagger eyes. The bulls in Pamplona, Spain can’t outrun the average paranoid citizen, convinced that your innocent, run-of-the-mill sneeze was fully armed with the germ equivalent of nuclear warheads.

So when I caught my husband’s cold two weeks ago, I locked myself down, resumed ordering groceries online, and stole out the house in my mask and dark glasses only to creep into Dr. Dan’s office. I stayed in my car waiting for a sneeze, then hoping I could hold off another one while in the waiting room. If I had, no doubt I’d have triggered a riot. Why, my masked face would go viral (literally and figuratively) and I would be shamed, cancelled, doxed, accused of evildoing, a one-woman mass-casualty act. I would be rhetorically cauterized by the caterwauling online mob. No thanks!

I had done well resisting the urge to become COVID-paranoid. This was not easy. First, I am Jewish and prone to worrying excessively. It’s in the genes; I can’t help it. Second, I began my writing career in the healthcare field. My daily work involved learning about both common and obscure medical conditions at a major teaching hospital, explaining them to the public, and then contracting a case of Fraidy Cat Syndrome. A few more hairs on my hairbrush than usual? Oh no! Could I have alopecia areata? Why is there a pain in my knee? Researching the myriad possible reasons for that could take hours and hours, an indulgence in hypochondria that no doctor recommends.

This reminds me of a joke:

The Jew says, “I am so thirsty, I must have diabetes!”

Now, back to my story. I worked hard over the years to recover from my Fraidy Cat Syndrome. With the help of a support group of fellow hypochondriacs, I eventually stopped examining my skin with a mirror powered with 20 times normal magnification, looking for unusual changes in skin tone or new moles, bumps or lumps. Take it from me: under a mirror magnified 20 times, everyone’s skin tone suddenly changes, and not for the better. In fact, it begins to resemble aspects of the moon’s surface. This is not a good look for anyone.

As awful as COVID-19 can be, neither my husband nor I worried excessively about getting it. We take supplements from A to Zinc, have “cocooned” among family, exercised, and daily thanked the Almighty for our health while praying for the recovery of those who are sick. But when we got our sore throats, I was online instantly checking for symptoms of the disease and wondered if we should get tested. I took the questionnaire from our health care provider, which sends alerts almost hourly about COVID-19 safety, to see if, based on our symptoms, we ought to get tested.

The answer was NO. We just had colds. When I reported this to my friend, whose hobby is now going for weekly testing and downloading news apps to alert her of any potential recent COVID-19 exposure she may have had, she was shocked. “Why did you tell the truth?” she asked in wonderment. Good thing the nation is now pumping out millions of tests every day. For some people, weekly testing has become an obsession.

With no fever, no chills, no loss of sense of smell other than from a stuffy nose, and only a slightly impaired ability to taste for the same reason, we were satisfied that we both had JUST A COLD. However, given the high state of alarm that so many people live with, and with even some of our most level-headed friends convinced they may be just a six-foot distance from contact with a lethal sneeze that could put them six feet under, we stayed home, played a lot of Backgammon, and thankfully, had Season 4 of The Crown to watch on Netflix. Over and over and over again.

Even without this coronavirus, it is smart and considerate to stay away from people when you have a run-of-the-mill cold. But please, if someone sneezes while talking a walk, it’s not germ warfare. Don’t scream and start running in the other direction, because you might then get hit by a car and be in much worse shape than if you had just caught a cold. And don’t shame or cancel or dox the innocent person for what is almost surely no threat to you. In fact, why not do the courteous thing and say, “God bless you!”

Because, my friends, sometimes a cold is just a cold.

Jewish Paraprosdokians
The Promise Of The Land
Which Chat Are You On?: Parshas Behar/Lag Ba’Omer
Do You Like Slow-Cooked Food? Thank the Jews
Comments