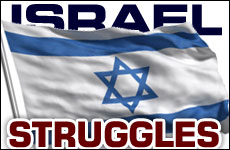 If there were justice in the world, Israel would be seen as a role model among the nations.

Not lightly does the Torah give the name Israel to our people, for it means "you have struggled with God and with men, and have prevailed." To be a Jew, to be a member of the people Israel, has always been a struggle, sometimes with God, sometimes with our fellow human beings. But that is our destiny, our call, our task...

The American writer Milton Himmelfarb once said that we are a tiny people, but great things happen around us and to us. Already before the 20th century Jewish history was recognized as : by Pascal, Jean-Jacques Rousseau and Tolstoy. Little could they have known that some of its most dramatic chapters were yet to be written:

The Shoah, the attempt once and for all to silence the Jewish voice and eliminate the Jewish presence. Yom Hazikaron, when we remember those who fell in Israel's defense as they discovered that the Jewish people still has to fight for the right to be, to exist, to have one place on earth where we can defend ourselves. Yet out of the depths of those very tragedies came two of the greatest moments in 2000 years of history, Yom Ha'atzmaut -- the restoration of Jewish sovereignty after 1900 years, and Yom Yerushalayim, the return to the ancient and holy city, home of the Jewish heart, focus of all our prayers, embodiment of all our hopes.

Yet once again Israel is under attack, after four years of a savage, ceaseless, brutal onslaught of terror. At the very moment that terror is being contained, Israel is facing a new attack -- a systematic campaign of delegitimization and demonization among the media, non-governmental organizations, university teachers, and perhaps even among the churches -- as if the cause of peace, or justice, or reconciliation, or coexistence were served by listening to only one voice in the conversation, one side in the conflict.

Why, after 57 years and more of seeking peace, is Israel still seen as the aggressor?

Why, after ten years of negotiation, in which the Palestinians were offered their own state in all of Gaza, 97% of the West Bank, with a capital in East Jerusalem, is Israel still seen as the sole obstacle to peace?

Why, in a world in which there are 57 Islamic states and something like 100 Christian ones, is the desire of the Jewish people to have just one state of its own seen as -- God forbid -- racist, exclusionary, retrograde?

Why, when Israel occupies a quarter of one percent of the land mass of the Arab world, is it deemed to be Goliath against David?

Why, alone among the almost 200 nations that comprise the United Nations, is Israel the only one whose very right to be is still called into question?

Why is Israel blamed for almost every problem afflicting the 21st century?

Why is the Israel-Palestinian conflict seen by one European public after another as the greatest threat to world peace, when anyone with the most rudimentary understanding of the contemporary world knows full well that were -- God forbid -- Israel to cease to be, not one of those problems of the world would be changed by a millimeter. There would still be conflict in Kashmir, Chechnya, Bosnia, Kosovo, Indonesia, the Philippines, China, Sudan, Algeria, and Zimbabwe. There would still be global warming, poverty, illiteracy, disease. Most people of the world would still be deprived of the most basic freedoms and human rights. All that would have happened is that the bravest experiment of modern times -- the introduction of freedom and democracy into a corner of the Middle East -- would have failed, and with it the hopes of many peoples, not just our own.

Why is Israel blamed for almost every problem afflicting the 21st century? Why is its very existence held up as the explanation for the underachievement, inequality, and lack of human rights in other countries? When the Tsunami occurred, with its devastating loss of life throughout the Indian Ocean, here was a disaster for which Israel could not be blamed. But it was. Within days a religious teacher let it be known that it was caused by Israel's program of nuclear testing. When it comes to hate, the capacity for self-delusion knows no bounds.

Why, when the whole history of the 20th century tells us what happens when hate is unchecked, when lies are told in the media as truth -- as they were in the case of Jenin --when universities discriminate against this group or that, do these things still happen?

Do we still -- after 60 years of Holocaust education, anti racist legislation, and interfaith activity -- have to defend the right of the Jewish people to be?

All too often, in defense of Israel against defamation, we have had to stand alone. No people should be left to face hate alone. As Martin Luther King said, "In the end we will remember, not the words of our enemies but the silence of our friends."

You shall be called Israel, for you have wrestled with God and with men.

Consider the five overriding problems that will face humanity in the 21stcentury:

Israel was the first country in the modern world to plant trees, not cut them down, to reforest not deforest. Long before ecology had entered the moral imagination, the Jewish people were turning a land that for centuries lay desolate into a landscape of farms and forests and fields.

Israel is the only country other than the United States built out of asylum seekers. They came from 103 different countries, speaking 82 different languages, and out of that global mixture a nation was born.

Israel's security fence, so often described as a wall, is the only effective non-violent protection against terror yet devised in this age of global terror.

According to Harvard University's Professor of Economic History, David Landes, only one country in the world has moved in fifty years from being a third world economy to a first world one: Israel.

Not only is Israel the only genuine democracy in the Middle East, but it has sustained its democratic freedoms under strains and stresses that would have broken the back of weaker cultures.

We are betrothed to Israel in unbreakable, unshakable loyalty. Nothing will stand between it and our love.

Yet today is a religious moment, and of all the words in the religious vocabulary of Israel, the key one is Emunah. Emunah is usually translated as faith, but it does not mean faith. It means faithfulness, loyalty, not walking away when times are tough. It means being steadfast in our loyalty to our people and our land, the home of all our hopes, the place where long ago the Jewish people was born, and where, within living memory, it has been reborn. Ve-erastich li be-emunah. We are betrothed to Israel in unbreakable, unshakable loyalty. Nothing will stand between it and our love.

Not for nothing were our people and land called Israel. Throughout more than a hundred generations of our history, we have known that to be a Jew involves struggle -- sometimes with our fellow human beings, sometimes with God, sometimes with both. Yet in that very name a momentous hope, a promise, was born -- that though the people Israel must struggle, it will always prevail. That, for the state of Israel, on this its 57th birthday, is our faith and our prayer.

Israel is our hope, our people's freedom and our pride.

Escape from My Hamas Captors

The Next Generation and the Meaning of Kol Nidrei

Where Are You?
Korach 5782: Visit to Lift the Spirit
That Time The Ivy League Found A Way To Limit Jewish Enrollment
Would You Rather Be Right or Happy?
Comments
MOST POPULAR IN Israel
Our privacy policy