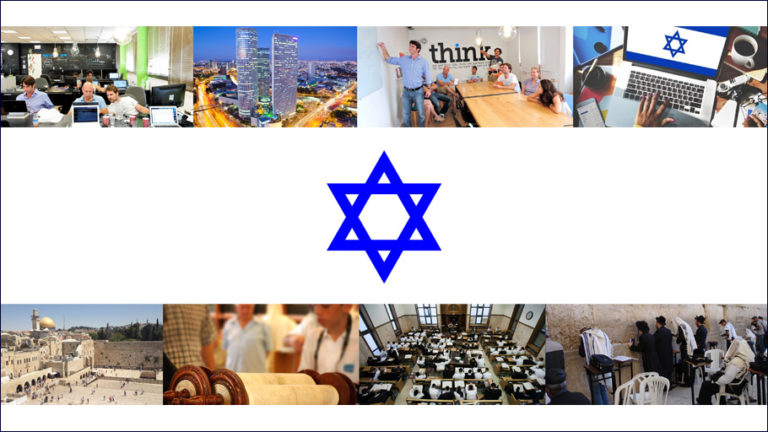 When I first visited Israel at age 24, a proud American who adored the Statue of Liberty and the Fourth of July, I was struck by Israeli flags waving everywhere from government buildings to private homes to yeshivas. Then, as I studied Torah and walked in the footsteps of Abraham and King David, I began to sense that this flag – its six-pointed star and two blue stripes – bespoke an ideal unparalleled in human history. 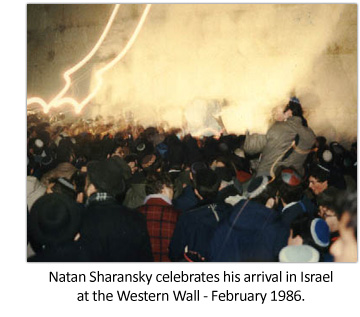 This intuition was punctuated a few weeks later when Natan Sharansky – after a decade in harsh Soviet prison for the audacity of wanting to go to Israel – was finally freed. That same evening I joined thousands of euphoric Jews at the Western Wall, raising Sharansky on our shoulders in a triumphant cry of Am Yisrael Chai – "the Jewish nation lives!"

What was the secret of this magical land?

When the State of Israel was proclaimed, the world watched with great anticipation. Everyone knew of the Jews' awesome impact – from the rabbinic greats Maimonides and the Vilna Gaon, to the groundbreaking work of Freud, Einstein and countless Nobel laureates. If the Jews could achieve this despite difficult exile – Crusades, Inquisition, pogroms, and Holocaust – then reunited in their ancient homeland they would surely transform the world.

The Jewish rebirth in their homeland is unprecedented in the annals of history.

Israel's first 70 years have been nothing less than astounding. The population rose from 800,000 in 1948, to 8.6 million today – multiplying more than 10-fold. (By contrast, the U.S. population has slightly more than doubled in that time.) Prior to the Holocaust 80 years ago, only 3% of Jews worldwide lived in Israel; today that number is 45% – marking the first time in 2,000 years that the largest Jewish population center is Israel.

On a broader scale, Israel's growing economic, military and diplomatic clout now ranks it one of the world’s top-10 superpowers. Israel has achieved the unimaginable by reviving Hebrew as a spoken language, while miraculously "ingathering the exiles" – nearly a million immigrants from Middle Eastern countries, and another million from the former Soviet Union, plus dramatic returns of Ethiopian Jews and "lost tribes" from the Far East.

This rebirth of the Jewish people in their homeland is totally unprecedented in the annals of history.

Along with the remarkable emergence of Israel as a start-up nation, modern Israel has witnessed an explosion in the field of Torah education, led by citadels such as Ponevich, Chevron and Mir – the largest yeshiva in the world with 9,000 students. It is here that Jewish ethics are honed: the balance of individual and communal rights; end-of-life issues; and the moral code of modern warfare. And it is here that Jews learn of the obligation to inspire the rest of the country, to create positive PR for God and His Torah. As Maimonides writes, the definition of Kiddush Hashem is where somebody sees a religious person acting with kindness, compassion and integrity, and thinks: "If this is what Torah does for a person, then I want it, too."

Each Jews is obligated to create positive PR for God and His Torah.

Given all we have achieved in 70 years, the Jewish historical mission – to bring the light of Torah to all humanity – is not yet complete. The prophet assures us that wisdom emanating from Torah academies will one day "fill the land with knowledge of God, as water covers the sea" (Isaiah 11:9).

As Rabbi Noah Weinberg, the founder of Aish HaTorah, said: "I've seen it time and time again: When a Jew is turned on to Torah, it sparks enthusiasm, energy and unbridled passion. Imagine an entire nation of Jews empowered to carry forth the Jewish message of rational, relevant wisdom for living. With technology, the message can go forth rapidly and effectively. How beautiful this would be!"

So what will be our national passion? Israel's founding father, the staunch secularist David Ben-Gurion, was torn. On one hand, he proclaimed Israel's "dream to be a normal people with our own prostitutes and thieves." On the other hand, appearing in 1936 before the British Peel Commission he declared: “The Bible is our mandate to the land.”

Yes, we have succeeded in building the finest hospitals, roads, schools and industry. Yes, we are lauded as the “start-up nation," a hi-tech leader in science, medicine, agriculture, energy and security, with the largest number of NASDAQ-listed companies outside of North America. These are indeed tremendous achievements, and we did it all amidst boycotts, terror and war.

But there is more. If this infrastructure is the "body" of Israel, Torah is our nation's soul.

Let's take a closer look at the Israeli flag. In the center is a Star of David, its six points symbolizing God's universal presence in all six directions. The triangle pointing "up" symbolizes the Jewish people turning to God, then activating a reciprocal flow of goodness into the world, symbolized by the triangle pointing down. Through our long and often difficult history, ultimately our only hope is trust in God.

Framing the star on the Israeli flag are two blue stripes. What do they represent? 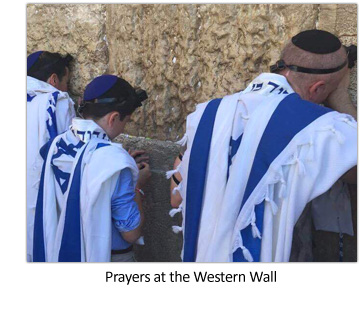 One of the most recognizable symbols of the Jewish connection to God is the tallit. Striped prayer shawls were found in the caves used as hideouts for Jews during the second century revolt against Rome, and these stripes have been used by practically all Jewish communities for millennia. It is these tallit stripes, legend says, that adorn the Israeli flag.

Which brings us to the Jewish mission: to teach the world about ethical monotheism, and how the sanctity of human life is rooted in every individual's "Divine image." This is why the Ten Commandments were given on two parallel tablets – five on one tablet, and five on the other. The first command on the first tablet is belief in God, corresponding to first command on the second tablet, "Do not murder." Respect for others is predicated on respect for God.

From here flows the revolutionary ideals that Judaism introduced to the world: universal education, justice, integrity, kindness, literacy, peace, social responsibility, charity, dignity and equality, to name but a few.

During the golden era of the Holy Temple, Israel thrived as the world's spiritual and moral epicenter. Non-Jews visited the Temple – "the house of prayer for all nations" (Isaiah 56:7) – and rulers like the Queen of Sheba journeyed to Jerusalem to study Torah wisdom.

In the process, Torah values became the bedrock of Western civilization. As non-Jewish historian Paul Johnson wrote: “Certainly, the world without the Jews would have been a radically different place... To them we owe... the basic moral furniture of the human mind.”

Which brings us to the crucial question: Moving forward, what will be our global persona? Do we celebrate our secular universalism – rock concerts, Olympic medals, beautiful beaches, and Wonder Woman? Is this how we define the expression of "light unto the nations?" Is this the culmination of 2,000 years of struggle and suffering?

A few years ago, when a delegation of Russian health officials visited Israel, the itinerary included Alyn Hospital in Jerusalem, a world-leading rehabilitation center for physically challenged and disabled children. The group toured a sprawling complex of advanced occupational therapy, physiotherapy, hydrotherapy, speech therapy, and psychological counseling. At which point one of the Russian representatives turned to his Israeli counterpart and said, "These children are infirm and handicapped. Why do you bother making such an effort?"

This is our mandate moving forward. Whether assisting orphans in Jerusalem or a village in Thailand, we must teach the world how to care passionately for every human being.

We have achieved so much. Yet Israel remains a work in progress. As long as corruption and abuse still exist in the world, more Torah light is needed to push away the darkness. We yearn for the day when "the wolf dwells with the lamb" (Isaiah 11:6) will be the new norm. No aggression, no duplicity. On this 70th Israel Independence Day, this is our hope and our prayer.

Why One Muslim Was Buried in a Jewish Cemetery