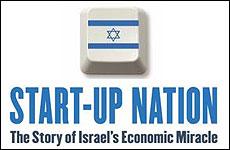 The premise for Start-Up Nation: The Story of Israel's Economic Miracle, by Dan Senor and Saul Singer, is simple. How has a nation of just seven million people, only a little more than 60 years old, surrounded by enemies and with no natural resources, produced more start-up companies and produced more Nasdaq-quoted companies than Europe, Japan, China, India and Korea combined? What magic dust does Israel possess to foster this entrepreneurial spirit?

This book tries to answer that question, while also examining the potential threats to Israel’s future wellbeing. It has a lively opening with case studies of innovation from recent years including one about a young Israeli who has developed a car battery that could make electric vehicles financially viable.

Instead of plugging in the car for hours on end to charge up, you would simply pull in to a battery swap station and go through a machine resembling a car wash. Your battery is dropped out and replaced by a newly charged one.

You pay your fee as you would for petrol and then carry on your journey. And it shouldn’t take more than a couple of minutes. Simple.

The idea was developed by Shai Agassi, who set up a company called Better Place to develop the technology. He was helped along the way by Israel’s commitment to eliminate its dependency on motor vehicles powered by oil, which is largely controlled by its Arab neighbours.

After a few false starts, Agassi raised $200 million for the venture, making it the fifth biggest start-up in history. It was supported by Renault and Nissan and Israeli billionaire Idan Ofer and is now being trialled in places like Denmark, Canada and Hawaii.

When it was founded in 1948 as a homeland for the Jews, Israel was a geographically small and arid territory.

To survive, it had to become self sufficient in so many different ways. In the early years, that meant devising innovative irrigation systems to nourish the desert soil and allow for agricultural use and to counter food rationing.

The constant influx of Jews from around the world has also played a key part in the country’s growth, bringing in new skills and ideas and swelling the domestic market for goods, which was important in the context of an Arab boycott.

The Israeli military also lies at the heart of much of the innovation, with many ex-soldiers heading up leading tech companies.

Young people are thrust into frontline positions, making potentially life and death decisions in a split second. You grow up quickly in that type of environment.

Conscription means that every young adult serves in the Israeli Defense Force (IDF), with the smartest students cherry-picked for the elite wings of the military. Israel is on a constant state of alert and these young people are often thrust into frontline positions, making potentially life and death decisions in a split second. You grow up quickly in that type of environment.

The authors argue that Israel benefits from having stable institutions and rule of law that exist in advanced democracies while also having a non-hierarchical culture, where everyone in business belongs to overlapping networks produced by small communities, common army service, geographic proximity and informality.

And the Israeli military has also sought constantly to innovate; to stay one step ahead of its enemies in terms of technology, hardware and intelligence. The Israeli government commits significant funds to research and development for the IDF.

But why has Israel been more successful than Korea, which also has a draft and a significant external threat?

Korea is home to a large number of tech companies but Israel has a far higher percentage of start-ups. “The fear of losing face and the bursting of the internet bubble,” holds Korea back, says Laurent Haug, creator of the Lift conferences, which focus on the “nexus of technology and culture” and alternate each year between Switzerland and Korea.

“In Korea, one should not be exposed while failing.”

Israelis, meanwhile, “don’t care about the social price of failure”.

But what of the future? Israel blossomed in the 1990s through the boom in technology, a massive wave of immigration from the former Soviet Union and the 1993 Oslo Peace Accords.

But immigration has slowed to a trickle while the peace that existed was shattered by a wave of suicide bombings and the standoff in Gaza, which has hit the tourist industry.

With global venture capital funding drying up, “thousands of workers in the tech scene” have been laid off. There are also concerns that Israel’s lead in academia is slipping, with large numbers of professors moving abroad.

And the threat of Iran also hangs over the region. “The first-stage Iranian goal is to terrify Israel’s most talented citizens into leaving,” is the bleak assessment from prime minister Binyamin Netanyahu.

The quality of life is also deemed to be lower than the West with Israel enacting a 10-year tax holiday on foreign income to try and entice people to return to the country to live.

The book concludes with a synopsis of a long meeting between the authors – both American Jews – and ex-PM Shimon Peres, also a former Nobel Prize winner. His advice is to forget the “old industries.” Pick five new ones and go for them hammer and tongs. Be a world leader. It sounds like good advice.

This article originally appeared in The Irish Times