Is God My Friend? 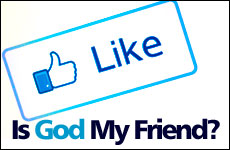 Shortly after my bat mitzvah, I decided it was time to get a better handle on God. Did He really exist? If so, did He call the shots down here on Earth, and in particular, in my own life?

Despite many years of Hebrew school and listening to the rabbi’s Shabbat sermons, my perception of God was remote, fuzzy and childish. I pictured God looking like the illustrations one typically saw of Moses, only I figured that God would have a bigger beard and sit on a huge throne. My shallow Jewish education had taught me a little conversational Hebrew, a little bit about the holidays, and to love and feel proud of the State of Israel. But God only made rare cameo appearances in any discussions.

Despite many years of Hebrew school, my perception of God was remote, fuzzy and childish.

I wanted to believe in God, and leaned toward belief because I thought it absurd that a complex physical universe could have sprung from a random collision of matter. Still, I sought more authoritative confirmation. My quest to understand whatever I could about God had slowly grown more urgent because my only brother, Allan, had died in a car accident a few years earlier. He was 17. Our family had been slammed by an emotional tsunami, and the psychological turmoil lingered for years. Talking about feelings wasn’t yet in vogue, so we all suffered together, yet alone. Looking back, it astonishes me that no one tried to help me manage my feelings of grief or even acknowledge them, because I was only a child of nine when Allan died.

I had no idea that Judaism believed in an immortal soul, an idea I thought only Christians believed. Knowing that this was an authentic Jewish belief would have soothed some of my psychic pain, and perhaps that of my parents and sister. With no understanding that God was real, cared about us despite this tragedy, and had a purpose for everything, I also became very insecure. What if something awful would next happen to my mother, father, or sister? Many years before cell phones, anyone who arrived home more than ten minutes later than expected caused me great, though temporary anguish.

I made an appointment with our rabbi to discuss God. In his book-lined study, I sat forward in eager anticipation that he would clear this all up. He held his chin in his hand and looked deep in thought for what seemed like a very long time. When he finally spoke, he said, “When I see a beautiful sunset, or hear beautiful music, I see and feel God.”

Okay, I’m with you so far. Keep going, I thought.

Though the rabbi was generous with his time, his conception of God was amorphous. He continued to explain God as more of a feeling, a sensation that came over him at various times. The rabbi and his wife had lost a child to illness, so he had known suffering, but he did not say that God was the architect of all things in our lives, painful or otherwise. Confused and a little disappointed, I left the meeting thinking, “Next time I see a great sunset, I’ll be on the lookout for God.”

God was such a huge and complex concept that no one around me either knew how or cared to discuss it. Maybe there wasn’t anyone who could truly understand an omnipotent, omniscient Being, but I knew there had to be more. It would be 15 years before I made any real progress in my quest.

In my mid-twenties, I attended my first classes taught by orthodox rabbis. I was startled to hear the Almighty spoken of naturally, as a real and vital presence not only throughout history but in our lives today. I was struck to learn that when Abraham spoke to God, or Moses spoke to God, those were real conversations that involved real relationships between mere mortals (albeit incomprehensively lofty individuals) and their Creator. As I met more observant Jews, I realized that it could be natural to speak about God not only as the ultimate Designer, but also as a personal friend. “Remember, God loves you!” my friend David would always tell me. I smirked at what I thought was a cute throwaway line. But l was intrigued by the idea of having such a Friend in High Places.

As I learned more traditional Jewish thought, and more history through a Torah perspective, God’s presence in the world and in my life became clearer. Even Mark Twain, a non-Jew, famously saw God’s providential hand in Jewish history: “The Egyptian, the Babylonian, and the Persian rose, filled the planet with sound and splendor, then faded to dream-stuff and passed away . . . other people have sprung up and held their torch high for a time, but it burned out, and they sit in twilight now, or have vanished. The Jew saw them all, beat them all, and is now what he always was, exhibiting no decadence, no infirmities of age, no weakening of his parts, no slowing of his energies, no dulling of his alert and aggressive mind. All things are mortal but the Jew; all other forces pass, but he remains. What is the secret of his immortality?”

Would God actually want to be my friend?

The “secret” was no longer a secret, at least for me. I began to believe in the Almighty as the driving force in the world, but I was still skeptical that I could have a personal relationship with Him. I couldn’t help but think of a famous Groucho Marx joke, where he quips that he isn’t sure he’d want to belong to a club that would admit him as a member. As someone who came to Jewish observance only in adulthood, I had come to deeply regret much of my youthful behavior and the smug remarks I made about religious Jews. Would God still want to be my friend?

The evidence, however, was that God had already befriended me long before. I existed, and had a purpose. My life was filled with blessings: a wonderful husband, four healthy kids, a home, a passion and skill for work I loved, friends, a supportive Jewish community, and much more. I finally allowed myself to fully accept the idea that God really had wiped my slate clean years before on my wedding day, which is considered like a mini Yom Kippur, where we can focus on teshuva for our previous missteps. It is God’s gift of a new beginning for a couple beginning a new life.

The things we tend to look for in life are the things we end up seeing. Living with more awareness of God in my life made it much easier to see and feel His presence, not only when I heard beautiful music or felt enraptured by stunning natural beauty, but in everyday events, particularly the daily miracle of watching my children develop and grow. My belief in God was growing stronger, but a personal relationship still seemed distant.

That changed when I heard a highly regarded speaker say that when we make a blessing over food, we “shake the foundations of the universe.” I was shocked by the passion with which he made this declaration. While I knew Jews were supposed to make blessings, I hadn’t learned that the sincere blessings of an ordinary Jew could have so much impact throughout the cosmos. I started making my own blessings with greater intent, which helped nurture the idea that God was with me all the time, that He loved me, and that my actions and words mattered to Him. A lot.

The more we reach out to the Almighty to forge a personal relationship, the more He reaches back to us. Ten years ago, my mother was diagnosed with terminal cancer just weeks before my eldest son’s bar mitzvah. The cancer was so advanced I worried that I might be sitting shiva during the bar mitzvah week. I addressed invitations through my tears, and had the surreal experience of discussing menus with the caterer on the same day I was discussing morphine dosages with my mom’s hospice nurse. If there was ever a time I needed to lean on God, it was then.

The more we reach out to God, the more He reaches back to us.

One Shabbat, as my mother slept in her bedroom, I quietly sang “Lecha Dodi” alone at the dining room table, before making Kiddush and saying HaMotzi. Help me through this, God, I kept thinking. I can’t do this alone. Skeptics may scoff that it was my own internal strength that got me through, but I felt God’s presence, felt Him shoring up my emotional reserves. My mother, weak as she was, also anxiously repeated that she had to leave, that my father, who had passed away years earlier, was waiting for her. A few times she looked up toward the ceiling, her eyes seemingly following a line across the room. The hospice nurse wasn’t surprised. “They often see angels in the room before they go,” she said.

I got up from shiva the week before the bar mitzvah. I distinctly felt Mom’s presence in the shul that day. And I knew that God had reached back to help me when I had reached out to Him, during a time when loss and celebration converged.

Nowadays, when my friend David tells me, “Remember, God loves you!” I no longer smirk. I smile, because I know that it’s true.

Loving Others the Unique Way They Want

#TheAskCharlieShow: How to Keep Resolutions
In the Shadow of David and Goliath
Where Do the Laws of Nature Come From?
Saadiah Gaon, Rashi and Maimonides: How Three Rabbis Revolutionized Judaism
Comments