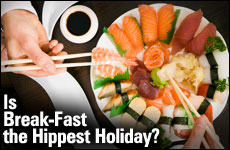 Relating to food on a day with no food.

It's official. No less of an authority than the New York Times has noted that in recent years, "break-fast" parties after Yom Kippur have become a "major event" in the "Jewish social calendar." It's natural for people who have been in synagogue, concentrating on praying all day, to want to relax and unwind with friends when the fast is over. Yom Kippur builds in intensity all day, and I've always found the final, climactic prayers, followed by the last, loud shofar blast, always leave me energized and awake, and feeling that I want to share my good mood with others.

Yet the Times article also notes a newer trend among people trying to set up for their break-fasts: staying home from synagogue to focus on cooking and preparing. I've even seen this phenomenon first hand: the manager of one supermarket near my house – with a large Jewish clientele – once told me that Yom Kippur is one of their busiest days, as people run in to shop for items for their break-fasts.

Yom Kippur is Judaism's most solemn, awe-inspiring day. For thousands of years, Jews have observed Yom Kippur as a day to take stock of our lives, to ask forgiveness of others, to forgive and let go of our resentments, and to speak directly with God. For thousands of years, Jews have kept Yom Kippur as a day apart, a special day when we have unique access to God, when He listens to our prayers with an extra intensity.

And this kind of holiness never goes away. Even today, when many Jews do not attend synagogue or perform all the rituals of Yom Kippur, the concentrated holiness of the day still motivates us. That's what I think is behind the desire of so many Jews to create lavish break-fast parties. When we don't find holiness in synagogue, we might try to create it in other outlets. Indeed, one person quoted in the Times article said that her annual break-fast was more meaningful than other Jewish rituals, including the Passover Seder, because at the break-fast "there is an actual discussion of religious ritual.”

Unfortunately, this transferring of our energies away from the intent of the day, and into gastronomic celebrations, more often leaves us feeling empty and unfulfilled.

Striving as an Angel

I can identify. When I was growing up, the idea that one could find spirituality on Yom Kippur was laughable. Our synagogue was usually empty during the week, but for Yom Kippur it was so packed that we had to rent a cavernous conference room in a nearby hotel. I recognized nobody at these impersonal occasions. I could barely see the person leading services, and couldn't understand the prayers (even the English ones). Almost nobody I knew fasted or prayed seriously. Of course, when it was all over, my family's wonderful break-fast was the high point of my day.

What eventually changed my outlook was learning the deeper meaning behind the Yom Kippur fast. The Torah teaches that when God created the heavens, He populated them with holy beings: celestial creatures who exist only to do God's will. These creatures spend all day long singing beautiful songs of praise about God. Whenever God asks something of them, they comply immediately; they exist only to wait on and glorify their Creator.

Afterwards, God created a new kind of creature, humankind, to live on earth. At this the celestial beings complained. "Are You not satisfied with us?" they asked God. "Why create these lowly creatures called people, who cannot praise You as we can? These humans are wild and they'll ignore you," the angels warned.

God explained that he loves the celestial beings, but that he loves people even more. Angels praise God because it is their nature to do so; they have no ability to rebel. But human beings possess free will; we can choose to praise God or not. This is what makes our love of God so valuable to Him. We bestow it freely.

Yet there is one special day each year when we human beings try to emulate the angels: Yom Kippur. On Yom Kippur, the ordinary rules do not apply. We don’t go to work or school or do errands, but rather seek to exist on a higher, heavenly level. We literally try to behave like angels. On Yom Kippur we wear white clothes, like the praise-singing angels. We sing beautiful prayers, like the holy beings. We try to stand during services to resemble the description of angels. And most obviously, on Yom Kippur, we don't eat and drink, just as if we really were celestial beings, with no need of food at all.

This is not an ideal we strive for any other time of the year. But on Yom Kippur, we want to reach God, to show Him that part us craves to move as close to Him as possible. And this angelic activity is a dramatic way of doing so.

Recognizing the energy it takes to undertake this fast, the Torah does in fact recommend that we enjoy a ritual meal – but one that is eaten before Yom Kippur. Everything about the pre-fast meal is designed to help get us in the mood for Yom Kippur, and to infuse us with energy for the awesome challenge of moving closer toward God. On the afternoon prior to Yom Kippur, we have a formal meal, with a nicely set table and good dishes. We avoid alcohol, and spicy and salty foods, which make fasting difficult. Finally, the typical before-fast meal includes bread, which is the cornerstone of every important Jewish meal.

As for the break-fast? At the end of an intense day of striving for higher spiritual levels, it is a wonderful opportunity to reflect with friends and family. So long as the break-fast doesn't become our main goal. On Yom Kippur, each of us has an appointment with God. Let's use it. And leave the thoughts of break-fast for later.

High Ideals, Murder and Me: What It Means to be Good
The Japanese Everything Bagel Spice Recipe
How To Stock A Jewish Pantry Wherever You Live
Blessing on Chewing Gum
Comments
MOST POPULAR IN Yom Kippur
Our privacy policy