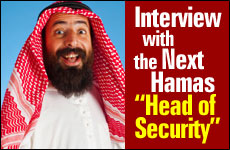 Given the longevity of his predecessors, Shahabi opens up about his fears and plans for the future.

Jewlarious Satire – Hamas recently named Ismail Abu Shahabi as its new Head of Security, following an IDF missile attack which killed former security chief, Ahmed Jabari. The assassination of Jabari follows a long line of Israeli assassinations of Hamas military chiefs including the assassinations of Abdel Aziz al-Rantissi on April 17, 2004, Nizar Rayan on January 1, 2009, Abu Zakaria al-Jamal on January 3, 2009, Mahmoud al-Mabhouh on January 19, 2010, Issa al-Batran on July 31, 2010 and Zuhir al-Qaisi on March 9, 2012. In this exclusive interview, Jewlarious’s Arab sister station, Al-Jewlarious, sits down with Shahabi to discuss his decision to take the job and his plans for the future. The transcript of this brief interview follows:

I am the Head of Security! What is more secure than that? The head of security.

Al-Jewlarious: Thank you for being here.

Ismail: Well, Al Jewlarious is the most respected website in the Arab world. How could I say no?

Al-Jewlarious: You are too kind. So, tell me…. How did you get this job?

Ismail: Funny enough, I was the only applicant.

Ismail: Yeah, it was late at night and I was surfing the web and I saw the posting on Craig’s List. I dusted off my resume, sent it in and I was hired the next day. They didn’t even interview me – just a congratulatory call from Khaled Mashal and an edible arrangement. I can’t figure it out.

Al: Well, I hate to burst your bubble, but…

Ismail: It comes with amazing benefits. Full dental, full medical, death benefits including one thousand virgins in heaven and personal use of the company Peugeot.

Al:  What was your background?

Ismail: Nothing special – some smuggling, a few armed robberies of relatives. I was a barista for a few months. You know, the usual.

Ismail: Yes, but the shifts were unpredictable. I needed something with more job security and now… I am the Head of Security! What is more secure than that? The head of security. And, did I tell you about the benefits? Full dental. I have an appointment next Wednesday for braces.

Al: So, you seem to be a little unaware of the hazards of the job?

Ismail: What do you mean?

Al: The hazards. You know… the last few people in your position were killed in surgical strikes.

Ismail: Yes, but, we signed that truce the other day, so we should be fine for a few decades. I am expecting that things will settle down nicely and then the Mrs. and I will retire to the beautiful western coast of Gaza or maybe the Persian gulf.

Al: So, you are optimistic about the truce holding….for decades???

Ismail: When Khaled Mashal hired me, he gave me a series of assurances that Hamas is committed to this truce. He told me that he had given his word to Mohammed Morsi and that his word is his bond. That pretty much takes care of that, right?

Al: I am not sure how to break this to you, but… Khaled Mashal is not really known for honesty and decency.

Ismail: What do you mean? I got that Peugeot within minutes of agreeing to be Head of Security. Want to take a spin?

Al: Yes, but that truce is really unlikely to hold. You could be dead by the end of the week.

Ismail: But, I am Head of Security and I have explicitly said, “No more rockets, until I get my retirement home built!” I think that you are misconstruing the facts. I won’t be dead at all.

Al: Sir, I am not saying this as a reporter, but I am saying this as a human being here. You are going to die. In fact, would you mind if we conducted the rest of this interview by phone… with me in Europe?

Al: No, I would prefer not to.

Ismail: Where are you going? Let’s jump in the Peugeot – I’ll put the sunroof up. No one will be able to find us.

Ismail: Terrorist? I am not a terrorist. I am just a guy with a new Peugeot.

Al: Yes – and you may as well remove the other seats in that car, because no one is ever going to drive with you.

Ismail: Well, Khaled and I are on our way to Tehran tomorrow. Maybe I can sell those seats at the bazaar.

Al: Sounds good. Good luck. I hate to be rude but I must sprint in the opposite direction.

Ismail: You are sure that I can’t give you a ride?

Al: Please, don’t even turn the car on.

The Jewish Punctuation Mark
The Promise Of The Land
Which Chat Are You On?: Parshas Behar/Lag Ba’Omer
Do You Like Slow-Cooked Food? Thank the Jews
Comments
MOST POPULAR IN Funny Stuff
Our privacy policy