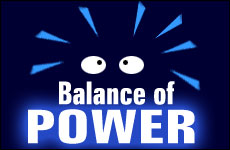 One man’s take on his experience during Hurricane Sandy and the following blackout.

(NOTE: The following are my observations during Hurricane Sandy and the blackout that followed. This is just my own account, in Passaic, New Jersey. I understand, as I learned once the power came back on, that there were people in much worse situations than just not having power for 8 days, and I thank God that I had to write this column on a clipboard in the dark, rather than in water up to my neck. Our thoughts and prayers go out to the people who are not as fortunate.)

- My power’s just gone out. That’s pretty impressive. According to the weathermen who have to stand outside on the beach in slickers and report on the wind with waves crashing around them before we go “back to the warm studio” to the guy making random gestures at a green screen, the storm’s not even supposed to hit us until 8 o’clock.

I’ve decided to chronicle my thoughts on paper…now where on earth do I keep paper?

- I’ve decided to chronicle my thoughts on paper, because there’s no telling what else this storm will bring. We could have a weatherman come crashing through our window. Where on earth do I keep paper?

- I hope the power comes on before 10 tonight, 9 Central. I’m going to miss Revolution.

- My wife’s ancient custom, when it comes to blackouts, is that you don’t open the fridge. This is as opposed to the custom I had before I got married, which is that as soon as the power goes out, you try to eat all the ice cream.

- The storm is over, but more than half the city’s still blacked out. My kids’ school has no power either. Apparently their phone system is down, so they sent out an email. Thanks.

- What did our ancestors do? I think they ate things that didn’t have to be refrigerated, like potatoes.

- The store is out of potatoes. We do buy some ice, so we can turn our fridge into an icebox, and my wife can spend several more days telling me not to open the fridge.

- The store is also out of yahrtzeit candles, though we found some hidden on a shelf near the baby food. Also, Halloween is coming up, thank God, so the store has plenty of candles with spiders and bats all over them. We also buy some aroma candles, which we later find give off more smells than light. But that’s okay, since we haven’t showered since Sunday. Maybe we should put one in the fridge.

- Our house is still dark, but smells strongly of apple cinnamon.

- I don’t know how they ever managed do anything in the old days. By the time the kids go to bed, it’s too dark.

-Should we just go to bed when it gets dark, and then wake up with the sun? But that’s when our kids wake up. How are we supposed to get anything done EVER if every moment we’re awake is a moment our kids are awake too, AND they’re home all day? We need our nights, so we can get things done.

-We invite the neighbors over for a game night. No one is entirely sure what their cards say. Someone wins, we think.

- There’s nothing to do at home, so people have taken to sitting in their cars all day and waiting to buy gas.

- It occurs to me, after all these people wondering why I’m not cold, that my house still has heat. Apparently, it helps to have a really old heating system. I don’t look into it further, because I don’t want to jinx anything.

- It occurs to us, after hearing various people talk about how cold they are, that maybe we should keep our food in their homes. Or at least on our porch, if we can figure out how to protect it from the animals.

- NOVEMBER 1. Halloween candles are cheaper today. Stock up for Shabbos.

- In the old days, they also knew to start thinking about what they wanted for supper much earlier in the day, instead of suddenly thinking about it once it got dark. “Oh, shoot. What do we do for supper now in a dark kitchen by the light of aroma candles?” It turns out that if you put a pot on top of a flame, it doesn’t provide enough light to see if the food is done. Neither do the candles, by the way. I can’t even tell by smell. All I smell is apples and cinnamon.

All I smell is apples and cinnamon.

- One of the local businesses is letting people work in their office. I bring along my wife’s laptop, and, for goodness sakes, a shaver.

- People ask if we’re going away for Shabbos. We could, but we’d have to buy gas. And the lines are such that I don’t know if we have enough gas to make it to the front of the line. I’m pretty sure I saw people pushing their cars to the gas station, one car length at a time. It’s okay. We’ll put food on the barbecue.

- The power company is taking their sweet time here, aren’t they? I haven’t seen a single truck yet, and I’ve been all over town. It seems like they’re saying, “We don’t have to fix anyone’s wires. What are they going to do to us? They don’t even have power!”

- We have yahrtzeit candles all over the house. People are walking in and going, “Whoa. Who died?”

- Called the power company after Shabbos. They say that if we want to know when power is coming on in our area, we should visit their website. Thanks.

- My wife points out that at least we don’t have a kid in diapers right now, because then we’d be changing them by candlelight. “Is he clean? I can’t see. Move his tushie closer to the fire.”

- We’re supposed to change our clocks tonight, if we have any.

- I got someone to check for me. According to the website, our power came on last night at midnight. Oh. I was sleeping; I must have missed it.

- Laundry is starting to be an issue. I can’t even see the laundry basket anymore. And my three-year-old, who’s scared of the dark, has wet at least 2 other people’s beds that we know of.

- People are still asking what our ancestors did. There are times you can ask that question, but there’s a limit. You can ask it when someone says, “I lost contact with my relatives, I have no phone or email.” So you can go, “What did our ancestors do? Send them a letter!” The post office is thrilled about this turn of events. They’re specifically bringing mail, maybe 3 times a day. “See? We don’t shut down. We’re still using tiny mail cars that we power with our feet!”

- But you can’t always ask that question. “How did our ancestors dial phones when they couldn’t see the numbers?” “How did they charge their devices?” “At what point did they just barbecue the heck out of everything in the freezer?”

- The power’s back on! Only 172 hours with no lights! Oh my goodness, this house is filthy. I thought we were scrubbing.

- We have a bunch of mostly used yahrtzeit candles, if someone has like half a yahrtzeit coming up.

Really Bad Jewish Ideas
Blessing on Chewing Gum
Was Rahab a Prostitute?
Extras In Our Own Epic
Comments
MOST POPULAR IN Jewlarious
Our privacy policy