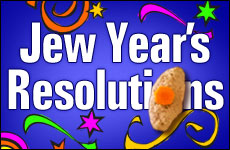 While the secular world is reveling with the streamers and pointy hats We Jews are once again, ahead, having already moved into our New Year months ago.

I’ll be more supportive of my child’s choice of career.

To paraphrase my pal, Freddie Roman:

Those of you out here tonight of the Christian faith, you are lucky. Every year, December 25th is Christmas. Every year, exactly the same. You could make plans!

If the Jewish people don't have the Manischewitz Seven Year Calendar, we have no clue.

For example, our holiest day, is Yom Kippur…Well, a few years ago, Yom Kippur came out on October 27, which made Yom Kippur that year very late.

And there isn't a Jew in this room tonight that didn't say last year, 'You know, Hanukkah’s early.'

You see Jewish Holidays are either later or early. We are never on time."

So what’s a Jew to do when, on January 2nd some nudnik wants to hear our secular list?

Do they want to hear:

For these we pray. We have to. But when will they happen? Who knows.

Now as a practical people, We Jews, then, might make secular resolutions that are realistic, do-able, and have a shot.

This is do-able. We can, however, create a small police matter should they be 15 minutes late. True, not all lateness means they were hijacked on the Grand Central Parkway, but if so, you’ve checked and know that 15 minutes isn’t enough time to cross State lines. A few realistic local preventive measures are only good common sense.

Jew Year’s Resolution 2: “I’ll be more supportive of my child’s choice of career.”

He wants to be an actor-lyricist-waiter instead of a pharmacist? Fine. You’re there for him and will prove it by mortgaging your house to pay for his Jersey debut in his new musical: “Katz.” Meanwhile, alert the family that you may need help – getting him into pharmacy school.

Jew Year’s Resolution 3: “I will follow the experts and eat four meals a day.”

According to experts, it’s healthier to eat four small meals a day than three big ones. The more times we eat, the more stable our metabolism which should help us finally lose that “baby bloat” -- when we’re 40. However, when defining portion size they’re using “G-Weight” (Goyim weight) which is far different from “J-Weight” (Jew-weight). “They” deal in ounces. We deal in slivers (just a “taste,” usually a pound), morsels (food that you can take in a single bite, two pounds), and smidgens (enough for a small Bar Mitzvah). And remember, you’re counting portion size! A pound of shmaltz is equal to a pound of carrot strips. So, if you really want to be fit, eat what you want, just stick with the “slivers.”

Jew Year’s Resolution 4: “I will give less guilt when others fail to call me enough.”

Is it their fault they don’t call to reassure you? Of course not. They know where they are, and if God forbid, you have an emergency, they figure somebody would text them: “MERMHA” (Mom in ER, Maybe Having Heart Attack) so they need to call every day? Besides, hocking them doesn’t work. No. Instead of guilting, take responsibility. “Friend Them” on Facebook and IM “’R Y OK?” at least twice a day and make it public. If they “Unfriend" You – start your own page. Trust me, they’ll call.

Jew Year’s Resolution 5: “I will not cross-examine my loved ones’ romantic relationships.”

On a rare occasion maybe you’ve been a little confrontational; embarrassed a family member; saw your daughter run from you geshrei-ing? No more! Of course you must know if a loved one is dating: a) a Jew; b) a person of substance; c) a person at all, which is why they built Search Engines such as Google. Hunting is not only allowed, but cautionary. Should you find a reason to doubt, use the Search Engine, write in: “Rent-A-Yenta” and move into the year with clean hands and heart.

Jew Year’s Resolution 6: “I will change the way I occasionally constructively criticize.”

By now you’ve learned that, despite your superior wisdom on everything from choosing a mate, a career, child-raising, cleaning, running a business, or making a matzo ball, nobody listens; nobody cares. You can, however, teach by example. Your son’s wife can’t make a decent cup tea? Sanitize a floor to your satisfaction? Visit … with “leftovers” she can freeze, and cleaning supplies. You might leave notes with Smiley faces saying: “Just so our little grandson doesn’t, God forbid, get beri beri or Ebola. Love Mom.” See? Mission accomplished, without anyone misunderstanding that it comes from love.

So mamalas, there you have it. Six of my Jew Year’s resolutions. So Nu, what are yours? Share them in the comments section below!

Jewlarious Times Special Edition: Crisis in Iran
Bechukotai 5782: Divine Retribution
Behar 5782: Working to Live or Living to Work?
The Wholeness of Being Broken
Comments
MOST POPULAR IN Funny Stuff
Our privacy policy