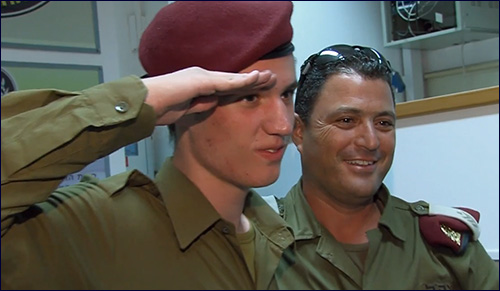 A foiled terror attack provides the inspiration for new levels of inclusion.

Imagine being an Israeli kid with Down Syndrome and dreaming one day of becoming a soldier in the IDF.

Imagine the parents dreaming to see this special child gain an independent life.

As the video below shows, "Great in Uniform" is a project that integrates young people with disabilities into the IDF, as soldiers in every aspect including a uniform. The goal: to provide a successful path of integration into society.

It all started in 2001, when IDF Lt. Col. Ariel Almog was driving in the Jordan Valley and spotted a terrorist approaching a bus full of passengers. After a short struggle, Almog succeeded in neutralizing the terrorist, who was wearing three explosive devices.

Almog was shot in the head, but miraculously managed to neutralize the terrorist.

Then suddenly, shots were fired at Almog from a nearby olive grove. A "back-up" terrorist was there to assist in the planned carnage. Almog was shot in the head, but miraculously managed to fire his own weapon and neutralize the second terrorist as well.

While recuperating for months in the hospital, Almog was exposed to many injured people with disabilities. It was then he conceived of incorporating disabled teens into the IDF.

Today, Rabbi Menachem Mendel Belinitzky of the Israeli organization "Lend a Hand" is on board to expand the project to include thousands more teenagers throughout the country.

Rabbi Belinitzky is driven to fulfill the Torah precepts of "Love your neighbor" and sanctifying God's name, Kiddush Hashem.

By working in IDF kitchens and supply depots, the project enables young men and women to preserve their human dignity, while gaining skills to contribute meaningfully to society. A team of psychologists and social workers accompany the soldiers throughout the program.

It's something all Israel can be proud of.

Move-to-Israel Filters
Vayelech 5783: Regret and Repent
Rabbi Sacks: Focus On the Important, Not the Urgent
Put Your Foot Down: Are Human Feet Poorly Designed?
Comments
MOST POPULAR IN Israel
Our privacy policy
Aish.com Is Looking for Great Writers