I Don't Want to Stand Out as a Jew Anymore 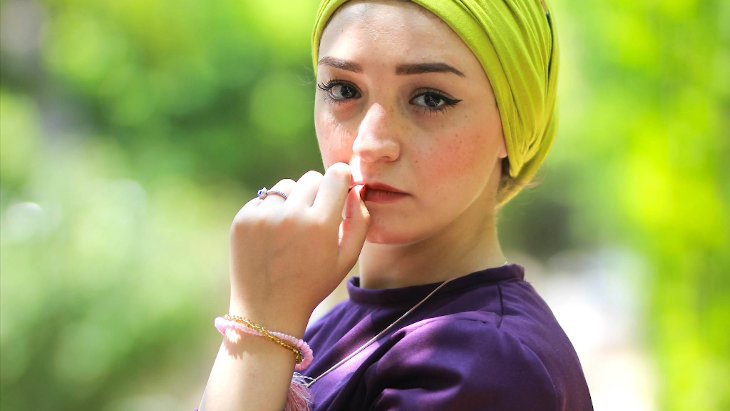 I haven’t been bagelled lately. If you’re Jewish, you probably know what that means.

In my head scarf a la Zadie Smith, I am recognizably Jewish. Wearing long skirts and long sleeves in the summer also helps peg me as Torah-observant, or Orthodox. All this means, I get bagelled a lot. Let me explain.

Say I’m in the produce section getting my pineapple de-peeled (wonderful contraption), when a silver-haired lady sidles over and tells me, apropos of nothing, how her mother used to bake challee for the Sabbath with poppy seeds. I nod affably. She then drifts off to the cereal aisle. I’m squeezing bags of pita for freshness in the baked goods section, when a dude with a scruffy beard and fake tattoo arm sleeves asks me the exact date of Hanukah (which is at least four months off), then points to the gefilte fish in my cart and tells me he doesn’t get his from the store but makes his own. I smile a little and bob my head. 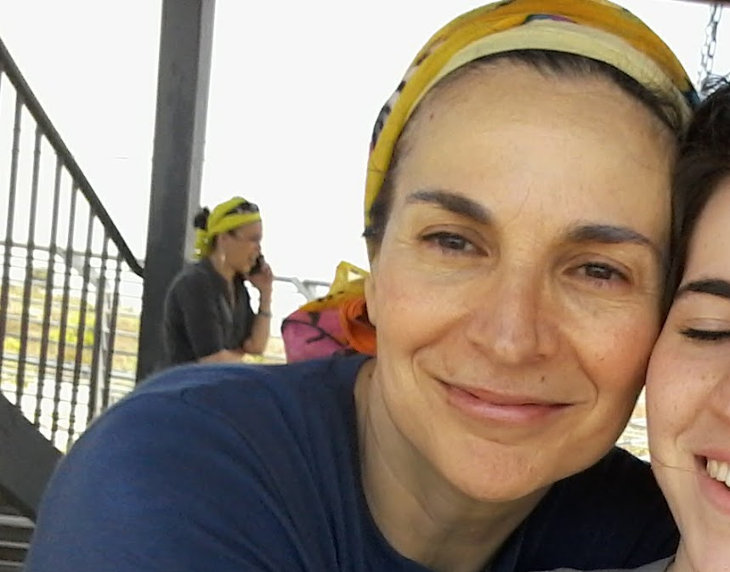 The author, wearing a head scarf.

People have bagelled me at bowling alleys, on Mt. Washington, and even when I was in labor. But mostly at Shoprite.

It’s a compulsion. They have to tell me, they have to deposit their Jewish experience, knowledge, tidbit or what have you, with someone obviously Jewish like me. I am befuddled: What am I supposed to do with their little Jewish bit? Am I supposed to guard it, for safekeeping, just in case they might need it one day? Have they deposited their Jewish factoid with me, and now, unburdened can go about their day more peacefully?

In some weird way they are paying homage to my out-there Jewishness.

Ah, what does the reason matter. Like a high priestess, I receive it, hold it, nodding my head with a sage look, like suddenly I’m wise. In some weird way they are paying homage to my out-there Jewishness. The unspoken contract requires that just as they recognize me, so I must recognize them as from the same tribe, even if they don’t look it to the outer eye. Then I release them and we each return to our own shopping.

It’s all a little magical and strange and hilarious.

But here’s the thing. I don’t get bagelled nearly as much these days. Not only because I’ve become a Covid recluse. It’s because I’ve exchanged my scarves for a short wig that’s so comfortable, I could sleep in it and have. With my wig on, I almost pass. Wait – pass as what? Unorthodox, I guess. UnJewish. I don’t want to stand out anymore. 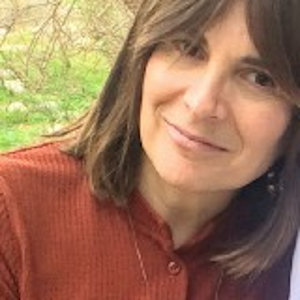 The author, wearing a wig

In the current zeitgeist, my head wrap no longer feels ethnic cool with a touch of the divine. Instead it makes me a moving target.

Or so I think. Maybe I’m wrong. I want to be wrong.

In the current zeitgeist, my head wrap no longer feels ethnic cool with a touch of the divine. Instead it makes me a moving target.

No pogroms have erupted here, after all. The Pittsburgh shooting, or even the rabbi’s death by machete that happened two doors down from my sister-in-law’s home in Monsey – that can’t compare to the full-scale slaughters that ravaged turn-of-the-century Europe.

But can you blame me for feeling anxious?

Every time I pass a police officer guarding the entrance to my synagogue, I’m glad and grateful to live in a country that wants to protect me. But then I stop and think: Why does a policeperson have to be standing guard outside my synagogue in the first place? Why does a rabbi in Massachusetts recommend his congregants to bring guns to shul?

I thought we were done with all that. Never again, and all that. How could anything bad happen to the Jews if we could count Judy Blume, Gal Gadot and Steven Spielberg among us. Alan Dershowitz wrote, back in 91, “The time has come for us to shed our self-imposed second-class status, drop our defensiveness, and rid ourselves of our pathological fear of offending our ‘hosts.” I agreed wholeheartedly. Enough with the oy vey hand-wringing and lamentation! Anti-Semitism is a thing of the past, so live. Be happy, be successful, and multiply. I am Jew, hear me roar.

But the louder we roared and the more powerful we became, the more vulnerable and tenuous turned our lot. Dershowitz was wrong. We needed to keep a low profile. We didn’t, and now the loonies on the right and the loonies on the left dogpile viciously on Jews, and most newspapers don’t even deign to report it.

I’m afraid the diversity blanket that’s spreading out over America won’t be covering me. And I get why. Because anyone looking at us would wonder how we could possibly claim vulnerable minority status when we’re thriving? It boggles most minds to comprehend that our success doesn’t immunize us to danger but actually greatly increases it.

Yom Kippur is coming, the Day of Atonement, when all external activity ceases and we go inward, spend the day in introspection, prayer and fasting. But after the Yom Kippur fast ends and we flick on our phones to catch up on what happened in the last twenty-five hours, I dread the news: which shooting took place in a kosher grocery in Newark; which college girl got shoved down a cement staircase by her floormates (including her RA) and was taunted, “You should have burned in the ovens with your family,”; which car rammed down a Hassid en route to synagogue in Boro Park, which elementary school kid got held down by peers and had her face magic-markered by a swastika in Pine Bush (not making any of the above up.) Somehow, our holiest day of the year is ripe for target practice, which is why, come the end of Yom Kippur, I get extra nervous.

See, I want to get bagelled again. You don’t have to be Jewish to do it. Nuns, panhandlers, CEOs, and ladies in burkas have approached me with bagelling intent, and I’m (usually) happy to hear whatever Jewish practice or expression they happen to know. My favorite is the African-American preppy-looking guy who approached me near Frozen Foods, casually mentioned a few really insider words like “Chumash” and “Parsha,” (which he nabbed from his Jewish roommate) then just before going down the yogurt aisle, looked me squarely in the eye and said, with his own sage knowing look, “Yom Kippur”.

I love how these encounters make me feel like the whole world is a party and we’re all playing nicely together.

I wish it could be so.

Photo in top graphic by ahmed zohnii on Unsplash
A version of this piece was originally published in P.S. I Love You

Being a Jew of Color: Will Accepting Our Differences Make Us Better People?
The Connection between Israel and the Jewish People
Grit and Torah
Why We Can’t See True Reality
Comments
MOST POPULAR IN Jewish Society
Our privacy policy