How Could She Do that to Me?! 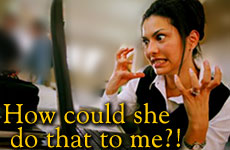 Why do we take things so personally?

What I didn't tell myself was that her computer was broken and she hadn't received my message. What I didn't imagine was her actual response: "I'm so sorry. My computer's been down for three weeks. I would love to have lunch with you."

Someone recently told me a similar story. At an event she was placed at the same table with a close friend and looked forward to an evening of catching up. After brief hellos, the friend left the table -- and didn't return. My acquaintance built up a list of complaints and hurt feelings. Turns out the friend got caught in a conversation about someone's troubles and felt she couldn't abandon this needy and pained individual.

Another friend spoke to me about the rudeness of a mutual acquaintance. "She doesn't even say hello or acknowledge my presence," she fumed. Hoping to make peace, I intervened and spoke to the woman. "I'm 8 months pregnant," she explained. "I'm nauseated and exhausted. I go through my day on automatic, through sheer force of will. I didn't even see her."

Why do we always take things personally? It usually has nothing to do with us and can lead to such resentment, hostility, gossip -- you name your character flaw!

Have you ever watched a teenage girl get ready to go out, let's say to a wedding? She has panic attacks over a "bump" in her hair, the wrong shoes, uneven eyebrows…"You're not the bride," I remind her. "No one's looking at you."

Instead of confirming your bitter instinct that "You can't trust anyone," you can be open and accepting and forgiving.

Like my friend with the broken computer, most explanations involve external, unpredictable circumstances. Sometimes the explanations are internal to the person but still not directed at you. Some people have a habit of being late. I'm not commenting on the merits of this habit, but if they're always late for dates with you, don't assume it's a reflection on their friendship or their degree of caring. It's just a reflection of who they are. Some people have a hard time with commitment; you can't always count on them to follow through on their promises. You may want to decide if that's a quality you want in a friend but it has nothing to do with you. It's who they are. They behave that way with everyone.

It's too easy to go through life bearing grudges and building resentments. There are so many opportunities -- so much misunderstanding, frustration, and disappointment. But if you recognize it's not personal, it doesn't break your spirit. Instead of confirming your bitter instinct that "You can't trust anyone," you can be open and accepting and forgiving.

Giving people the benefit of the doubt goes beyond putting a spin on the situation and circumstances; it applies to character as well. Judge someone favorably and assume he actually means well. Assume he doesn't want to hurt you, that he probably wants a relationship with you. But he is as trapped by his limitations as you are by yours.

Nasty gossip about others and negative inferences about situations are evidence of more than just bad character -- they reflect a worldview. Do you look around you and see mostly good or mostly bad, the proverbial half-full or half-empty glass?

I am lucky to have a beautiful backyard filled with green grass (even in the winter!), flowering plants and fruit trees. It's very peaceful, calming and nourishing out there -- as long as I can stop myself from focusing on the toadstools growing in the grass, the broken sprinkler head, the overgrown bamboo, the dying princess tree, the rotting nectarines…It's really a lot of effort.

The same is true with people. There's a lot of good if we only focus on it -- and if we learn not to take everything personally. If you have children you'll find this lesson especially useful with your teenagers. Their flare-ups, their anger, their hostility towards you (how could they when you've done so much for them?!) is not about you. It's about their own pain, confusion, insecurity.

And in marriage as well. Don't take your spouse's character traits that annoy you as a personal affront.

We make fun of people who look at the world through rose-colored glasses. But we could probably all benefit from the experience.

History of the Swastika: 6 Facts
Chukat 5782: Let’s Play the Blame Game!
The Sin of Moses: The Two Ways to Communicate
In Aftermath of Chicago’s July 4th Shooting, Local Moms Provide Countless Points of Light
Comments
MOST POPULAR IN Current Issues
Our privacy policy