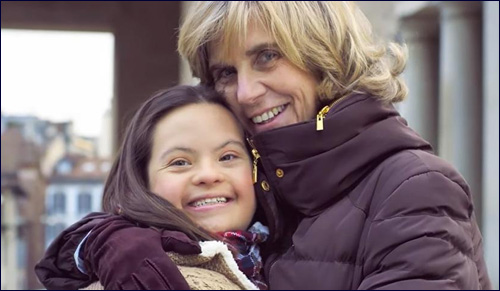 Prenatal genetic testing is eliminating babies who would otherwise be born with Down syndrome. France wants to keep it that way.

By and large prenatal genetic testing is eliminating babies who would otherwise be born with Down syndrome. In approximately 90 percent of instances in which Down syndrome is revealed, the fetus is aborted. And if the French court's recent decision is any indication, France wants to keep it that way.

The court upheld a ruling of the French Broadcasting Council to ban a two-minute commercial produced by the Global Down Syndrome Foundation titled “Dear Future Mom” that addresses the fears and concerns of a mother who discovers she is carrying a baby who has Down syndrome.

“I’m scared: what kind of life will my child have?” the mother asks. Children with Down syndrome from many nations in various languages tell the future mom that her child will hug, speak, go to school, tell you he loves you and “can be happy, just like I am — and you’ll be happy, too.” (Check out the video below.)

The court ruled that the video is “inappropriate” for French television, saying that the video’s depiction of happy Down syndrome children is “likely to disturb the conscience of women who had lawfully made different personal life choices."

The video was banned because it may cause unease in the hearts of parents who chose to snuff out these unwanted lives in-utero.

Columnist George F. Will put it more sharply. In his recent Washington Post piece, he wrote, "The court has said, in effect, that the lives of Down syndrome people — and by inescapable implication, the lives of many other disabled people… are of negligible value next to the desire of parents to have a child who has no special — meaning inconvenient – needs."

As a glaring example of twisted moral sensitivity, this “offensive” video was actually banned because it may cause unease in the hearts and minds of parents who chose to snuff out these unwanted lives in-utero.

The video is powerful because it depicts in living color the full and gorgeous humanity of these kids with Downs and the very real nachas and joy parents receive from raising them.

It’s a personal issue for me. I’m the proud father of a 12-year-old son who has Down syndrome (George Will also has an adult son with Downs), and I can certainly empathize with the mother’s fears in the video. If my wife and I could have somehow seen a snapshot of all the pleasure we would be getting in raising our son when he was born, a lot of our initial shock and disbelief would have dissipated.

Before my son, Yehuda, was born, I never thought that I could raise a child with Down syndrome. But so much of that thinking is based on sheer ignorance and distorted values that are rampant in society, even in Jewish communities, I am sad to say. When we reduce our children to nachas machines and props in our oh-so perfect life, the disabled child isn’t quite the image you want to broadcast on your Facebook page.

The disabled child isn’t quite the image you want to broadcast on your Facebook page.

I don’t want to minimize the challenge in raising special-needs kids; it is hard work and entails unique challenges (try spending three hours a day crawling up and down stairs with your toddler for a year as part of his early intervention program!). But when our focus is on fulfilling our God-given role of helping our child reach his full potential, the rewards are just as great as raising any child, and sometimes even greater.

The key is to believe in your child’s potential and not to sell him short. A recent case in point: we decided Yehuda should try to learn to read from the Torah for his upcoming Bar Mitzvah. My wife was confident he could do it; I was less so, but let’s give it a shot and not assume he can’t until he tries. It took only four days for him to master his aliyah; turns out he’s a natural! My wife and I, and the rest of our kids were amazed when he belted it out loud. And most importantly, Yehuda was beaming with pride and full of self-confidence, a confidence that only comes from putting in effort and attaining a genuine accomplishment. That is how it is with all kids, with Downs or without.

Fascinating!
Deep Breaths
What Happened to the Truth?
The Japanese Everything Bagel Spice Recipe
Comments
MOST POPULAR IN Current Issues
Our privacy policy