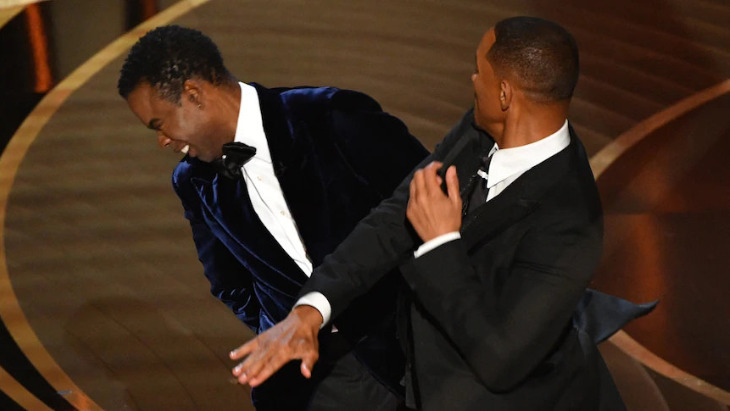 My three takeaways from the shocking incident.

This year’s Academy Awards had a shocking twist, for all the wrong reasons.

It all started with Chris Rock’s cruel and offensive joke that he ad-libbed before presenting an award. He made fun of Will Smith’s wife, Jada Pinkett Smith, who has alopecia, a condition that causes one’s hair to fall out. Pinkett Smith shaves her head. Rock, who has previously mocked the actress on live television, said, “Jada, I love you. ‘G.I. Jane 2,’ can’t wait to see it.”

Pinkett Smith rolled her eyes in disgust but kept it together. Her husband at first pasted a smile on his face, but when Rock rubbed it in, saying, “That was a good one!” Smith snapped. He marched on stage and gave Rock a hard slap across the face. Back in his seat, Smith twice shouted for Rock to “keep my wife’s name out of your [expletive] mouth.”

And what were the immediate consequences to assaulting a comedian on live television in front of tens of millions of viewers around the world?

Fifty minutes later Smith received a standing ovation for winning the Oscar for Best Actor. Despite his horrific outburst, he was crowned king of Hollywood. What should have been a shining moment that capped his acting career and gave tribute to the family of tennis stars Venus and Serena Williams (Smith played their eccentric father Richard) was reduced to a cringe-worthy sobfest of Smith apologizing to the Academy and the Williams family, and a lame attempt at justifying his actions as protecting his family. (I have a feeling Jada Pinkett Smith knows just how to defend herself, thank you.)

It took a good 24 hours for Smith to finally apologize to Chris Rock for his onstage assault: “Violence in all of its forms is poisonous and destructive,” said Smith. “My behavior at last night’s Academy Awards was unacceptable and inexcusable. Jokes at my expense are a part of the job, but a joke about Jada’s medical condition was too much for me to bear and I reacted emotionally. I would like to publicly apologize to you, Chris. I was out of line and I was wrong. I am embarrassed and my actions were not indicative of the man I want to be. There is no place for violence in a world of love and kindness.”

I think there are a number of takeaways.

Let’s start with what Chris Rock did. Can you imagine how you would feel if someone embarrassed you in front of all the people you love and respect? Now magnify that by being mocked in front of tens of millions of people. Now imagine someone was making fun, not of you, but of your loved one’s medical condition.

If Chris Rock would have realized that the words of his heartless joke are actually bullets, he’d be a lot more careful about what he shoots from his mouth.

Pretty low. There’s a good reason for Judaism’s commandment not to embarrass another. The Talmud compares embarrassing someone to murder; causing someone to blush in shame is akin to spilling their blood. The Sefer HaChinuch, a classic 13th century work of Jewish literature that details the reasons for the commandments, writes that there is no greater pain than embarrassment.

For some reason western society believes celebrities and public figures are fair targets for denigration and ridicule, that jokes that tear an actor down are “part of the job.” Humor should be used to reveal the absurdity of ideas, not to attack people.

If Chris Rock would have realized that the words of his heartless joke are actually bullets, there’s no question he’d be a lot more careful about what he shoots from his mouth. Will Smith is not the only person in this fiasco who needs to give an apology. Chris, the world is still waiting.

If anyone but an A-list actor idolized by fans worldwide would have assaulted a comic on stage because he found a joke to be offensive, chances are the attacker would be hauled off stage, the police called, and charges leveled.

Even though Rock’s joke was terrible and hurtful, it’s obviously not a reason to storm on stage on live television and violently assault him. We all know what he did was plain wrong -- shockingly wrong --  and stupid. Violence is never the answer.

But let’s not fall into the trap of self-righteousness.

We’ve all lost it at some point. It probably wasn’t as spectacular a blowout as the one exhibited by Will Smith, but let's recognize that we all have it within us to snap, to let our emotions override our thinking, and lose control. We are susceptible to lashing out in anger.

“At your highest moment, that's when the devil comes for you.”

Denzel Washington nailed it when he told Will Smith, “At your highest moment, that's when the devil comes for you.” Just swap the word “devil” with “the evil inclination” – in Hebrew, the yetzer hara, the animalistic part of us whose job it is to constantly tempt us and spar with our higher selves, our soul. It’s that conflict that creates free will, and there is never a moment’s rest.

And as Denzel said, the higher the moment, the more prone you are for attack. The Talmud says it this way: The greater the person, the stronger is his yetzer hara, his evil inclination (Succah 52a). That equilibrium maintains free will; the internal battle is never over. Clearly none of this remotely justifies Smith's actions; he is wholly accountable and must bear the consequences for his actions. But don't gloat over his downfall. In a different scenario, that could be us.

Western society puts actors and celebrities on a pedestal. Will Smith is arguably the biggest actor in the world today. What message did he broadcast on the Academy Awards? It wasn’t the typical: “You can attain your big dreams so never give up….”

It was: Solve your problem through violence; it’s okay to lose self-control. And the world will still give you a standing ovation.

Our children are watching and learning. This is a teachable moment. Discuss what happened with them. And most importantly, provide healthy role models for them to emulate, starting with you and your spouse.

The US and the Holocaust: “We Did Nothing to Prevent It”
The 21st President of the United States: Failure or Inspiration?
Hiding Their Jewishness
The Jewish Pope: Following the Questions Home
Comments