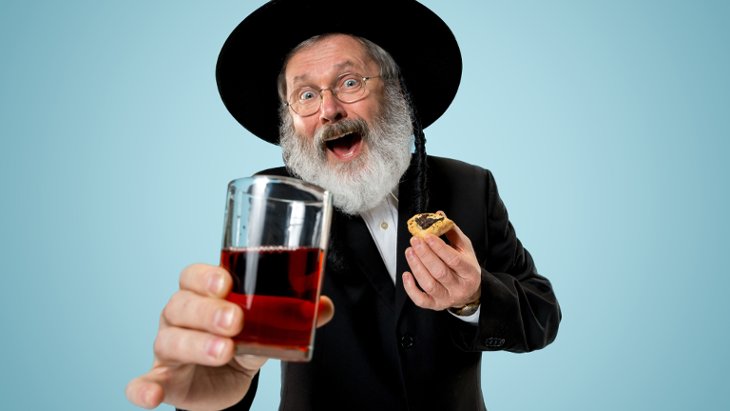 What has no Jew ever done since Abraham? Wait in line for a table.

Jews have a complicated relationship to food that’s only rivalled by the Japanese who face down the dreaded fugo fish that can kill a person if the chef had a bad night.

It’s said that food is love. As Jews love a lot, it stands to reason we love a lot of food. Especially if we’re paying for it. In fact, even if we’re not actually “essing” we’re talking about “essing.”

After lunch? “So, let’s have a snack.” After the snack? “So when’s dinner?” After dinner? “So where we going for dessert?”

To this day I find it astounding when I ask a Gentile friend what they “feel” like eating and they say … “whatever.” Worse, when we go to a restaurant they actually stand quietly behind people with reservations.

What has no Jew ever done since Abraham?

STOOD ON LINE WAITING FOR A TABLE. EVERY JEW KNOWS EVERY HEAD WAITER AND SCHMOOZES “HEY BERNIE! WE’RE BACK BOYCHICK!” Then they sail past 38 people.

As with everything, when it comes to restaurants, we have our special types that send the rest of us under the tablecloth. Let’s look.

Wherever they’re sitting, it’s shvitzing or blowing on them. I have one friend, a performer, who schleps to restaurants in 90-degree weather in a wool scarf to protect her sensitive throat. Meanwhile, she’s screaming …

“OY! CAPTAIN … IT’S AN OVEN IN HERE! PUT UP THE AIR CONDITIONING! WAIT, WE’RE MOVING TO ANOTHER TABLE.”

They have never, in 40 years, ordered. They say: “Listen, I had a late lunch, so I’ll just pick” – at your food. Walking around the table, hanging over each relative like ravenous buzzards, they pick from you. The Pickers are also very picky with their picking. They hone in on your one huge matzo ball, or your entire chicken breast. They’ve also mastered the art of eating their stash standing. THE PICKERS LAW: “While one is not ‘sitting’ one is not ‘eating.’ When one is ‘standing’ one is just picking” -- even if they’re balancing enough food to throw a small bar mitzvah.

A first cousin to the Picker, the Splitters usually come in teams. I had cousin and his wife who would a) invite us all out to eat; b) after the rest of us ordered a normal meal, like clockwork we’d hear: “Doris darling, I’m not really hungry. How about we order a cup of pea soup, one glass tea – and we split” thereby making the rest of us look like chazzers (pigs). c) when the check arrived for say, $75, they would casually look at each other, then out loud on cue: “Hmmm Doris … the three dollars there … that was us, right darling? For one tea and one cup of pea soup -- which we split?” Awkward silence. Waiter tapping. Finally, another guest would sigh and say: “Ok already” and grab the check. They could take their act to vaudeville – if it wasn’t dead.

They order a chef salad, then say to the waiter: “Listen boychick. Instead of the Israeli salad can you maybe substitute a Caesar? Oh, and add a few onions. Now, forget the dressing. Instead on the side, put a little mayo. You can keep the lettuce, but do I need so many croutons already?” The Subbers put more waiters in hospitals than salmonella.

The borscht is too cold. The tea is too hot. The fries are too limpy. The white omelet’s too white. Nothing is “just right.” So, looking like they just ate a bad sour pickle, they croak to the waiter: “Send it back!” The Sibber assumes that the chef is hiding the good stuff in a secret locker behind the restaurant. “Aha!” they think. “If I send this back enough times, I’ll force the gonif (thief) to give me the secret pastrami.” Finally, on the fifth try, the bedraggled waiter brings the “secret” pastrami to which the Sibber, who has “tasted half” and “sent back” four then sighs: “Forget it! I lost my appetite already!”

THE “I NEVER TOUCH ITS”

They: 1. are “allergic” to everything from Streit’s matzo to table salt; 2. have decided that the Food and Drug Administration is on a mission to poison kishke; 3. never have nor ever will touch a food that grows next to an animal with less than six legs – or is yellow. “So waiter … exactly how is the boiled egg prepared?” “What?! You use salt?! I want to talk to the chef!” Going out with them involves an interrogation usually reserved for terrorists.

Equipped with a ruler, protractor, and food scale, the Equalizer is the group “measurerer.” If, God forbid, someone at the table gets an extra carrot, a fraction more brisket, or takes another roll, the Equalizer becomes the Emperor of portions. “Heh, heh, boychick … that’s two rolls for you. Not that I mind.” If you go “family-style” they’re the ones who “divvy” with their handy mircrometer that they borrowed from a friend at NASA. Their mission now is to correct the fact that when they were the youngest, they got the burnt end of the pot roast.

Subset One: The CheckMacher. The ones who always reaches for the check. They could have moved up from a cold-water flat to a house in Scarsdale 30 years ago but they still need proof that they now make more than their brother-in-law.

Subset Two: The CheckChazzer. They never pick up the check. When it comes, they run to restroom, have a “senior” moment of “where am I?” or reach for it so slowly, the waiters have left.

Subset Three: The CheckCruncher. Armed with glasses, a calculator, and a magnifier, they figure exactly what everybody ate, and owes. “OK, Mel, you had the tuna melt, $5.26 with the extra tuna? $5.56. Merna had a bagel and drank some of Selma’s tea which comes to $3.14 if you split the tea.” The CheckCrunchers also comes equipped with the Miracle Penny Cutter for those pesky half a cent conflicts.

Armed with a purse the size of the cargo hold on the QE2, the “For Laters” are obsessed with leftovers. Not only do they bring theirs home, they collect from everyone’s plate – kasha crumbs, 10 peas, the fatty corned beef scraps – “for later.” After the collection, they ask the waiter for a doggie bag and add: “would you put in, maybe a few cups of ketchup … and a challah?” The “For Laters” need to be carefully watched, as they are also capable of grabbing leftovers from other people’s tables, which is not only embarrassing should the strangers notice their leftovers are missing, but dangerous, should their doggie bag contain the rancid meat they were going to use as evidence to sue the restaurant.

Do you have your “special types?” By all means, share!

The Bubbie Diaries
Saadiah Gaon, Rashi and Maimonides: How Three Rabbis Revolutionized Judaism
King Sennacherib and the Siege of Lachish
Three Small and Easy Changes to Add Positivity in Your Home
Comments
MOST POPULAR IN Jewlarious
Our privacy policy
Aish.com Is Looking for Great Writers