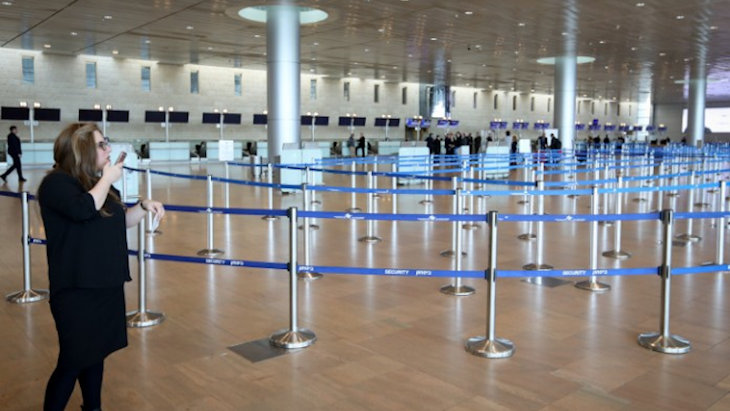 We thought the lack of tourists was due to a war, but then we saw CNN and BBC weren’t blaming us.

Coronavirus has affected Israel just like many other countries around the world. As has been widely reported, Israel has announced that anyone traveling to the country will have to undergo a mandatory 14 day quarantine. This has of course been devastating for the Israeli tourism industry. But we Jews must always look for an opportunity to see the good in difficult times, or as I like to call it, the blue and white lining. So here it is:

People Are Starting to Speak Hebrew

Suddenly, Hebrew is the number one language being spoken in Israel. Even in Jerusalem, people are starting to speak Hebrew.

Store owners are so relieved to have a break from trying to speak English. And I am relieved to finally understand what they are saying. It made no sense in English. I have not heard anybody say, “My friend,” in over two weeks. One proprietor in the shuk who used to speak to me in English finally said to me in Hebrew, “You know, you are not getting a good deal. I am ripping you off.” I was relieved not to hear in English, “I give you deal.” This was the first time I returned home at peace with how much I spent at the shuk.

Falafel is not being sold at 40 shekels anymore. The shuk shopkeepers are even showing prices on their products. They’re not making up prices depending on your accent.

Note to Tourists: The falafel shops are finally clean and the tourists are missing this. The pita loader guys are cleaning their hands after they cough. True, coughing in the air with no mouth covering, and sneezing openly, is still happening. I don’t believe we will ever be able to stop that in Israel. But we’ve come a long way. I feel bad for the tourists who are missing this new clean falafel. Maybe when this is over the new practice will continue? Can we try that falafel store owners??

People Thought It Was an Attack

When we saw no tourists, our first thought was that Israel was under attack. But CNN and BBC said nothing bad about Israel so we were confused.

We were happy to find out Israel was not under attack and the lack of tourists had nothing to do with anti-Semitism; unless the person who first contracted the virus in China was Jewish. Then we’d all be in trouble.

I love Beer Sheva. It’s so quiet. It’s like Israel’s suburbia. Now every city in Israel feels like Beer Sheva.

I hope I did my part just now, and more people will move down south. Nefesh B’Nefesh, you’re welcome.

Cab Drivers Are Not Beeping

Horn honking in Israel has been cut in half. I guess less tourists means less taxis on the road. Don’t worry, someone still cut me off in line at the supermarket this week so this is not an overall improvement in manners. Israelis need a place to get out our anger so there’s always going to be some horn honking. Even though half of the stores are closed, people are still driving on the road so they can honk. It’s therapeutic.

Some People Are Less Friendly

We are being encouraged not to shake hands. But some people in Israel are taking it a little farther. They see someone they know approaching them and they run to the other side of the street. The belief is that anybody walking has the virus. Otherwise, they would be taking the bus.

Once the tourists come back, I’m hoping the service people at the bodega near me will start saying “shalom” again. We’ve all become suspicious of each other as if smiling will help us contract the disease. I wouldn’t mind being called “my friend” again by somebody who doesn’t know me. I miss it.

We’ve turned into a cool country. Fist bumping is the new cool way to say “shalom.” The elbow bump is the preferred method suggested by some doctors and I think it’s sweet. I wish the tourists would be in on this and see this new way Israelis are greeting each other. We would get an amazing reputation.

Security Is Better Than Ever

This is the safest time to be in Israel. Mass quarantine helps with security.

Airport security has time to focus on the traveler right now. They’re checking every item in those bags. I’ve got to be honest. I never trusted airport security in the first place. Asking me if I’m smuggling stuff from America. They should know I’m smuggling into Israel when I leave Israel with two empty suitcases. Why is no one keeping track of that?

Some tourists are still coming even though they will be locked up for 14 days after arrival. Being the savvy business people we are, Israelis will not miss this business opportunity. Tourists come to Israel and are quarantined to the hotel. They can do a virtual tour of the Kotel tunnels while in the hotel. They can go down to Eilat, virtually, and don’t get sunburned. They go to their bathtub, lay on their backs, and we tell them “this is the Dead Sea experience.”

Fortunately, we are making an exception that tourists can still enjoy the huge Israeli hotel breakfast. Then they get two more buffets, daily. So going forward all tourists will leave Israel with fifteen pounds of Israel, rugelach and humus, on them.

Some tourists who already planned their trip and don’t have the money, now have to let the family know they’re in the country. They’ve got no choice -- they have to stay at cousin Itzik’s for two weeks. That’s the vacation. Cousin Itzik and Israeli TV.

You visit and now cousin Itzik and his family are bonding with you, because they’re now quarantined by your visit too. Finally, cousin Itzik is speaking English.

Certain Parts of The Country Are More Packed Than Ever

Israelis aren’t leaving. I didn’t realize how much vacationing Israelis do. The country is packed but that’s because it’s filled with Israelis who were supposed to be in Budapest right now.

As difficult as coronavirus is there’s a bright side in Israel -- at least there won’t be another election taking place anytime soon. Right?

Be My CyberFriend
Deep Breaths
What Happened to the Truth?
The Japanese Everything Bagel Spice Recipe
Comments
MOST POPULAR IN Jewlarious
Our privacy policy