How Do You Spell Knaidel? 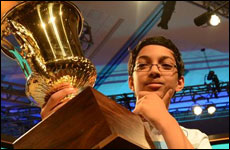 The National Spelling puts its spotlight on Yiddish. Is it a dying language?

Arvind V. Mahankali, a 13 year old from Brooklyn, won American’s 2013 Scripps National Spelling Bee on May 30 by correctly spelling the word knaidel. His win spotlighted Yiddish, the mamaloshen (mother tongue) of many Ashkenazi yidden (Jews) around the world.

Actually, his win made some people farblonget (confused), for as far as many are concerned, there’s no standardized English spelling of Yiddish words. Knaidel (dumpling), a tasty nosh (snack), might just as easily be spelled kneidel or knaidle – or even knaydl.

This is because Yiddish isn’t written in English characters – it’s an old language that grew out of Jewish communities in Central and Eastern Europe. Combining a bissel (little) Hebrew, some German, with a dash of Slavic influences, Yiddish reflects the unique nature of Jewish life in Europe. Some Yiddish words capture the nuances of Jewish life in a way that no other language can.

What’s a machatuna, for instance? It’s the parents of your child’s spouse. There’s no word for it in English, and reflects the importance of extended family in close-knit Jewish circles. A balabuste is a bustling homemaker, whose kitchen is always full of beautiful nosh for Shabbos (Shabbat). A mensch means person, and it’s used to mean the full measure of a man – someone who lives up to his (or her) potential: the full measure of what a person should strive to be.

There are some other colorful expressions that have endeared Yiddish to generations of people. For instance, what’s the difference between a shlemeil and a shlemazel? The shlemeil spills soup on the shlemazel. (This might cause the shlemazel to plotz – which means explode – in anger.) A piste kayleh’s an empty barrel: a person lacking gravitas. The gantse megilla means the whole story. A shtik holtz is someone with no personality. A gelaimter’s someone who drops whatever he touches. A trepsverter is the perfect retort you think of – after you’ve left the room.

In all the coverage of the spelling bee, some commentators have wondered how many Yiddish speakers there currently are. As the dwindling number of Holocaust survivors and elderly European-born Jews gets smaller and smaller, it can be tempting to view Yiddish as a dying language. When the last Yiddish bookstore in New York’s historic Lower East Side closed, the New York Times called it another nail in the language’s coffin. Lovers of Yiddish might have been ferklempt (choked up) at the news.

Yet reports of Yiddish’s demise are greatly exaggerated. In fact, Yiddish is having a gantse mazel (success) as its primary speakers – Chassidim and other Orthodox Jews – see a population explosion in Europe, the United States, Israel, and elsewhere.

I remember once reading an article in my local paper about the “death” of Yiddish in Chicago; it highlighted some elderly women who met to keep the language alive. Yet later that afternoon, I heard a conversation between a young Chassidic mother and her toddler – all in Yiddish. (My Yiddish isn’t great, but I think she was telling him not to get shmutz – dirt – on his new mantle – or coat.) It turned out the child spoke Yiddish not only at home with his tatte and mama, but in school, too, where all his Jewish subjects were taught in this beautiful language.

He wasn’t alone. Since then, I’ve heard Yiddish on the lips of little kindelach (children) on three continents. I’ve shopped in shopping malls in New York where the conversations were all in Yiddish, the kids ran around yelling in Yiddish and even the toys in the toy stores came with Yiddish instructions. I’ve ordered food in Antwerp delis where Yiddish mixed with Flemish all around me. (The food was geshmak – delicious – I fressed it all up and made a complete chazer of myself.) In Israel, I’ve tried to decipher Yiddish newspapers sold in kiosks on the streets, as families all around conversed in this vibrant tongue.

All these places where fellow yidden (Jews) were speaking Yiddish felt so heimish (homey). I thought of my great-grandmother, the last member of my family to speak Yiddish as her mother tongue. So much has changed in the world since she was alive, I’d gotten used to thinking that the world she came from – the Yiddish speaking world of pre-war Europe – was gone and forgotten. For a while, it seemed as if it might be. My great grandmother’s children abandoned the Jewish traditions she held dear; when she spoke to them in Yiddish they answered in English.

So hearing Yiddish on the lips of young children all around me was a mechaya. (From the Hebrew root “chai”, or life, it that means a revelation: a new discovery.) The language of my great grandparents skipped me and most of my friends: we never learned Yiddish, except as a few humorous phrases and insults. But it is continuing in new generations, and we all – the sandwich generations between the generations that spoke it in the past and those still to come – are links in that chain.

There’s one Yiddish word I know: Yiddishkeit. It means Jewish culture and practice. I’d hate to think of that going the way of a dying language, too. Perhaps that’s why I’m so freilich (happy) and leibidik (another word for happy – there are lots of them in Yiddish) that its future seems assured. To Yiddish let me offer a traditional blessing we say on birthdays: ay hundrid und zvanzig – you should last one hundred and twenty years. And to Yiddish, and all of us, whose grandparents might have spoken it, and whose descendants may still: L’chaim: to life!

Where's the Outrage?
What Makes Eli Run?
The Tyranny of Materialism
Science Enters the Mysterious Inner World of Consciousness
Comments
MOST POPULAR IN Israel
Our privacy policy