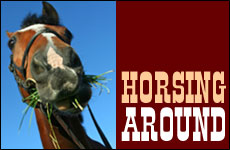 My giant horse Miguel made me ask: Am I a body or a soul?

Somehow I thought I could convince myself that I was still a teenager. The receding hairline, the growing pouch, and the thinning hair were all due to something in my diet. The fact that I have a hard time reading in the evening without strong lighting was all because when I was a kid I would read in the dark in my room, and because I stared at too many 3-D puzzles.

But this week I discovered that, lo and behold, I am no longer a teenager in any way, shape, or form (although the shape and form were gone a long time ago).

I spent a week on a beautiful ranch out in Santa Barbara, California, with a large group of college-age students who were learning about Judaism in a fun and relaxing atmosphere. It may have been relaxing for them, but it was brutal for me. I haven't played basketball for hours in the cold and windy rain since I was a teenager, I don't usually stay up until 3am and then wake up at 7, and I don't play intense volleyball with crazy Canadians who sing, "Oh Canada" every time they a score a point too often.

After four days of this punishment, I realized I was no longer a teenager. I had officially moved into that stage of life where the body can no longer take abuse, where sleep is essential to performance, and where the body needs more than hot dogs, burgers, cookies and soda.

Just as I felt the week should start winding down, we had one last trip. We were headed to Rancho Osho for horseback riding and more punishment. They provided me with a giant of a horse named Miguel. Unlike his friends Diesel, Salsa, Apple, and Nascar, Miguel was not exactly what you would call a tame horse. Whoever trained my buddy Miguel told him that reins are just for suggestions, not commands. So throughout the trail, Miguel would get distracted and drift off to the sides. Only after repeated pulls on the reins would he meander back into line as if nothing had happened.

The worst was when there was something he wanted to munch on the side of the trail. The wranglers had told us not to let them eat, and that if they did we should pull strongly on the reins. When I did that he would usually ignore me, but if I pulled really hard he would turn his big head and give this look that said, "Look fella, I'm letting you sit on my back for an hour. Either you stop being so uptight or I am going to toss you over the next ridge we pass. I've done it before, and won't hesitate to do it again. Do we understand each other?"

That was all good until we came across a mistletoe plant. Contrary to popular belief, it doesn't help one with romantic endeavors – it's actually poisonous. The wrangler screamed at me not to let Miguel munch and I pulled back on the reins with all my strength. But Miguel managed to keep his head down and his mouth full of delicious, poisonous mistletoe!

The horse is my body, the rider is my soul.

That's when the epiphany came. I realized that my experience with Miguel is an exact analogy for my body-soul dynamic. The horse is my body, the rider is my soul. My soul has a goal -- to get from point A to point B, namely, closer to God. However, my body keeps getting distracted and going off to the sides, forgetting about the trail set for it by my teachers, parents, and role models. Not only does it forget its primary goal of getting my soul from A to B, but it also becomes focused on food, wine, pleasures, and other physical pursuits that take it away from its purpose.

Some of those desires are like the mistletoe and are dangerous both to my body and my soul. But my body keeps munching on, unperturbed by the yanks on the reins from my soul who is trying to convince me to stay away from the poison and to keep on course.

My body says, "Let me stay in bed, I just need ten more minutes of sleep." My soul says, "Let's get up and accomplish! Let's fill this day with meaning!" My body says, "Just one more doughnut," (my favorite kind of mistletoe), but my soul tries to pull it away saying, "You don't need another one – it's not good for you." When my son spills grape juice on my white shirt, the horse in me says, "Get angry, buck that person right out of the room with force," but the rider tells me to calm down and recognize it for the mistake it is.

The way to tame Miguel is to be firm with him and not give in to his desires. The more Miguel sees me giving in to him, the more he's in control. The wranglers taught us that the way to show the horse that you're the boss is to be gentle but unyielding; consistently firm, not jerky and erratic. This is the way we can deal with our body-soul dynamic. By keeping our brains as the control center of our activity, we're guiding the horse and not letting our bodies run off with our emotions.

The more we give in to our emotional and physical desires, the more they begin to control us, and the sooner we find ourselves on a totally different path than the one we started out on.

Remember who is the rider and who is the horse, what's your goal, and how you're going to accomplish it. And most of all: stay away from the mistletoe!

Time for Your Annual Job Review

The Work
Saadiah Gaon, Rashi and Maimonides: How Three Rabbis Revolutionized Judaism
King Sennacherib and the Siege of Lachish
Three Small and Easy Changes to Add Positivity in Your Home
Comments