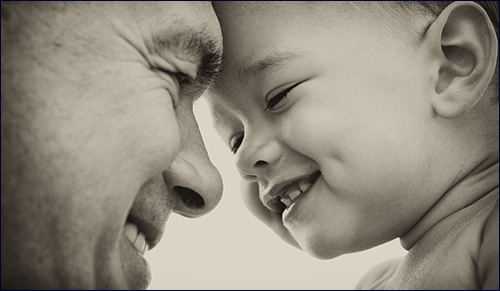 How my grandfather defeated Hitler.

Yesterday, in a rented room in Brooklyn, Hitler lost the war all over again.

We ate blintzes, lox and bagels while it happened. We smiled and caught up with each other over iced cappuccino, on tables adorned with white hydrangeas in hammered silver vases. Small children drew with crayons and strung beads on lanyard at the arts and crafts area, as my grandfather vanquished his enemy.

Yesterday, my Zaidy, a war orphan, Auschwitz survivor, child victim of man's inhumanity to man, gathered his family to celebrate 70 years since his liberation from Auschwitz. In a clear voice, he stood up and spoke about his life to a room filled to capacity with over 150 people, all of them his children, grandchildren and great-grandchildren.

Mothers shushed babies and grown men listened intently as his large hands gripped the microphone. He spoke about feeling embittered, afraid and alone. With numbers on his arm and eyes shining with tears, he painted memories so vivid that they felt like yesterday.

"My dear children," he began, "I ask you to be patient with me while I show you the beautiful tapestry that has been woven from the thread of my life."

Born near Krasna, in Romania, he was deported to the hell of Auschwitz in a cattle car, in the mass Hungarian transports of 1944. His father had been taken to the forced labor camps years earlier, before his bar mitzvah. His mother and sister were beaten as they were herded into the ghetto. He remembers the sound of his mother moaning in pain on the cold, hard earth. The soles of her feet had been whipped. She could not stand and there were no beds.

Arriving at the station in Auschwitz after the nightmarish journey, a Polish Jew advised him to say he was 16 and not 14, thus saving his life. He had not eaten in three days. It was Shabbos and my grandfather stole a piece of bread from a pile in another barracks. He handed the bread to the Rebbe of Krasna who made Kiddush on it and shared it with them all. In the block, they were packed like animals, standing and sleeping on the floor. He stuck closely together with four other boys, a small band of children, stealing, hiding and lying to survive. My grandfather borrowed a white coat and passed himself off as a kitchen worker where he could grab the occasional onion or potato to share with his friends. “Death hovered constantly over me… my eyes saw heart-rending things.”

At age 15, he was liberated. He searched for his father but discovered that he was long dead. He found his sister, Raizel, but she was deathly ill, her lungs destroyed by the war. Within a few weeks, she had died too. My grandfather looked around at the destruction of his world and realized that everyone he loved or who had ever loved him was dead. He was alone. A child, completely and utterly alone in a cruel world that hated him and wished him gone.

He spoke of his anger and bitterness and confusion. He spoke of starvation and torture and beatings. Of the ghetto, tuberculosis, torment, forced labor. He spoke of his difficulties upon coming to America. The harshness of a life of loneliness, the guilt of the survivor. He said these things briefly, and matter of factly. He was not looking for sympathy. He was just telling the truth.

Then he spoke of his joy, his gratitude and his love. Love for his large family, for his rich and fulfilling life, and for his closeness to God. His joy erupted into song and dance. Music played as his family encircled him, dancing around him, dancing for him.

I imagine him; skinny, bereft, angry. The loneliest man in the world. Then I blink as I watch the small children clamoring to reach him, surrounding him with their warm, sticky love. Their sparkling eyes, and open smiles. They are well-fed, wanted and cared for. They are Jewish children flourishing within a community who rebuilt, who started again.

His hands reach out to cup a soft cheek, to pat a curly head. You can see in the little ones' bright eyes how each secretly believes they are Zaidy's favorite. That his smile shines solely for them. I know they feel this because I feel the same way. My grandfather has spent a lifetime cultivating relationships. He booms out, “Hallo!” in his deep, rich voice to each person he meets, his smile lights up every room.

My Zaidy is a genius at making the people around him feel special, feel loved. This is his extraordinary gift. I remember the security of his large hand closing around mine tightly as we walked around the block on a cold Friday night, the thrill of having him lift me high in the air and pretend to drop me again and again, his mischevious grin as he wiggled his ears so hard that his hat shook on his head. I remember how he mashed my fish with his fingers to be sure I never ate a bone. At my Zaidy’s side, I felt protected, cherished and wanted. He made us all feel that way.

The Nazis took his parents, his siblings, his home and his childhood. They did not manage to take his love, warmth and joy.

As his children and grandchildren stand up to speak about him, my mother whispers that the miracle was not only his survival. It was the survival of his faith, his decency and his sense of humor. These are the bricks with which he rebuilt his world.

The family joins in songs of praise and gratitude as my grandfather speaks of faith and pain. He cries a little and laughs a lot. He apologizes to God for ever doubting Him.

"I must publicly ask God for forgiveness, for having complaints against His ways. I harbored feelings of resentment in the darkness of the concentration camps... I cried out to Him."

He says that life has been a puzzle, full of pieces that made no sense until today, in this room, at this time. "Only He who created my tapestry could have anticipated that I would one day face the glorious picture I now see before my eyes."

My grandfather pauses, looks up and smiles. His face is shining with the light of a man who has been buried in a pit but now stands at the top of a mountain. He is not alone anymore.

"Even if I'd had a normal, tranquil life, I could never envision a sight more magnificent than this one."

The singing starts again. His children and grandchildren form an outer circle, the great-grandchildren surrounding him in the middle. My grandfather sits on a chair – clapping, laughing and waving his fists in the air, victorious.

I realize suddenly, that in all the time my Zaidy spoke, Hitler's name was never mentioned. My grandfather omitted him. He made him disappear. "So may all Your enemies be vanquished, God."

Yesterday in a rented room in Brooklyn, surrounded by the many, many people who love him, my grandfather won the war. And Hitler lost again.

Something to Live -- and Die - For
Korach 5782: Visit to Lift the Spirit
That Time The Ivy League Found A Way To Limit Jewish Enrollment
Would You Rather Be Right or Happy?
Comments
MOST POPULAR IN Israel
Our privacy policy