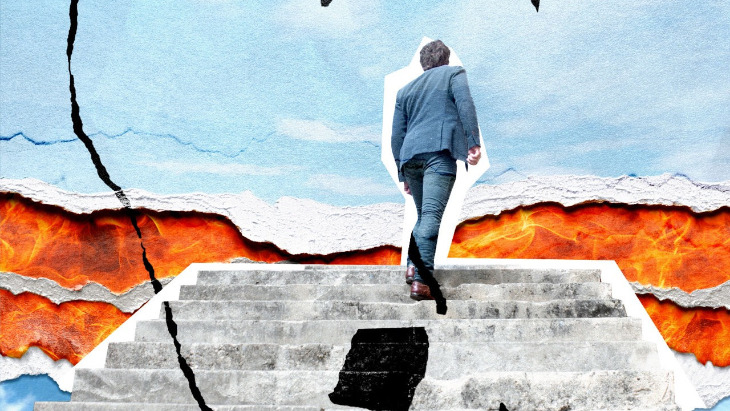 For whatever reason – and it comes up more often than you’d think – many people have told me that Jews don’t believe in heaven or hell.

Which is sort of true.

The Jewish concepts of heaven and hell are radically different from how they are portrayed in popular culture, but Judaism does believe in an afterlife, which was the point of two of our recent social media posts.

If you read those posts carefully – because, obviously, that’s how people consume content online – you’ll notice they both end the same way: the afterlife is the place where the person you chose to be encounters the person you had the potential to be. Depending on the life you lived, that prospect is either exhilarating or terrifying. (Me? I am in no hurry to find out.)

Our source is the great medieval thinker and philosopher, Maimonides (from his Laws of Repentance, 8:2), where he explains this statement about the afterlife from the Babylonian Talmud (Berachot 17A)1. “In the world to come, there is no eating, or drinking, or sex … rather, the righteous sit with their crowns on their heads, and bask in the glow of God’s presence.”

But that statement isn’t so straightforward. Once you know there’s no eating or drinking, you know the Talmud must be describing a reality that’s different from the physical world. It’s a place lacking physicality, physical bodies, and possibly even time. Since that’s the assumption, how can the Talmud then say the righteous – who, for our purposes, I’ll define as people who have fulfilled their spiritual potential – are sitting? You can’t sit if you don’t have a body. And how can they have crowns on their heads? Again, if you don’t have a physical body, by definition, you also don’t have a head.

As Maimonides explains, the Talmud isn’t being literal, it’s being conceptual. “Not sitting” is an expression of passivity, which means an experience without labor or effort. The “crown” refers to knowledge, or an understanding of reality that was acquired while alive. That awareness, ultimately, is your life in the afterlife.

Death, on the other hand, is a passive experience of the person you chose to be. Except there’s a catch: your post-death experience is tempered with clarity. You’re no longer blinded by ego, justifications, or rationalizations; and your perspective is broader than the constraints of a three-dimensional, time-bound, physical world.

In other words, you get a glimpse of the real you. Hopefully, you like what you see.

One moment of freedom – of free choice and self-actualization – is better than an eternity of spiritual bliss. It’s what the Torah means when it says that man is “created in the image of God.” The image of God has nothing to do with your physical appearance – God doesn’t have a physical appearance – it has to do with independence. God is independent and creates worlds. You are as well. You are independent to create your own world.

In that sense, the afterlife is a drag: no more opportunity or choice. But the opposite is also true. One moment of spiritual bliss in the next world is better than all the pleasures of this one, which is what the Talmud calls, “basking in the glow of God’s presence,” or an elevated experience that’s impossible while confined to a limited, physical world. Life is an amazing opportunity, but that doesn’t mean it’s easy. The challenges never seem to end, and then you die. But at least once you’re dead, the work is over, and, hopefully, that’s when the fun begins. The Talmud is saying that nothing comes without effort, but the effort is worth it.

One of our readers asked:

What if your “potential” doesn’t come to fruition because of illness? In my case it’s genetic, not something I got from making poor choices.

Is it possible your “greatest potential self” is different than what you imagine it to be? That what you are meant to achieve is not what you currently define as success? I.e. it might be emotional greatness, or a greatness in bringing others closer to God, or a greatness of insight, etc.

Which, I think, hits the nail on the head. Your potential isn’t an objective goal like winning a race or making a lot of money. It’s subjective and relative to you. It’s the spiritual journey you embark on in this physical world, and in that sense, we’re all in the same boat. Who doesn’t have challenges and seemingly insurmountable problems? No one gets a free ride. How you deal with them – with both the major struggles as well as the minor annoyances – and what you make of yourself in the process, is the point.

Obviously, there’s a lot more to say. The afterlife is an enormous topic, and a lot of it is shrouded in mystery, or as another reader noted:

Jewish concepts around death are numerous and tend to be intentionally vague for good reasons. You get a basic framework, let it go and focus on your work here and now.

And isn’t that the point? Don’t get hung up on what happens after you die. Worry about making good choices. Make your life incredible now. You’ll have plenty of time to worry about the afterlife after you’re dead.

The Truth about Religion: Using Evidence to Decide What to Believe

Confessions of a Creationist