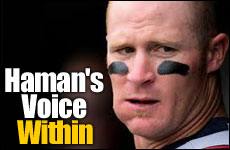 According to Haman, Brooks Conrad is a total failure, and so are you.

It wasn’t supposed to end this way. Brooks Conrad had worked way too hard for way too long to go down in history for something like this.

The Atlanta Braves were hosting the San Francisco Giants for Game Three of the 2010 National League Divisional Playoff series. With two outs in the 9th inning, the score tied and the winning run in scoring position, the San Francisco Giants’ Buster Posey hit a routine grounder directly to the Braves’ second baseman Brooks Conrad.

Braves’ fans held their breath. The rookie second baseman had already committed two costly errors that night. It was impossible to imagine that one player could so single-handedly ruin an entire season – until the ball bounced under his glove and through his legs, allowing the winning run to score. “It’s completely embarrassing. I feel absolutely terrible right now,” he said after the game. “I wish I could just dig a hole and go to sleep in there.”

So did Braves’ fans.

It was quite the unfortunate end to what otherwise would have been considered a fairytale rookie season. “Clutch Conrad,” as his teammates lovingly dubbed him, was not your everyday rookie: He was 30 years old on Opening Day.

Brooks spent nine years chasing his dream in the minor leagues, watching teammate after teammate get the call before him. Most players give up at a certain point, recognizing with each passing year the significantly decreasing chances of making it to the Big Leagues. But Brooks Conrad is a fighter. He plays with tremendous heart and passion.

And when he finally got his shot, he made the most of it. He led the Braves both in batting average with runners in scoring position, and in what’s known as “close-and-late situations” (at bats in the last three innings of a close game). He hit seven home runs in the 7th inning or later and was tied for the League lead for pinch-hit RBIs. He was involved in some of the most memorable Braves’ victories, including five game winning home runs, two of them pinch-hit grand slams. His teammates and fans loved the excitement and intensity he brought to every game.

But as Spring Training for the next season commences and Brooks Conrad steps out onto the practice fields of Champion Stadium in Orlando, Florida, the question remains: What will define the past season? Will it be the horrific conclusion, the glaring and embarrassing public failures in the national spotlight, or the realization of a decade of work, successfully contributing to a Major League team?

Haman came from a humble background. The Medrash records that he was once so poverty stricken that he sold himself as a slave to Mordechai. But he rose through the ranks and eventually made it all the way to the top, appointed as Second in Command of the entire Persian Empire. Upon the king’s command, the entire land would bow before him wherever he would go.

Everyone that is, except for Mordechai. This one Jew refused to bow. And that angered Haman to no end; he simply could not tolerate it. Haman's plan to eradicate the entire Jewish nation was accepted by the king. But before the big day arrived, he was invited to a special party with the king and queen. And as he walked out of the palace following the party — feeling on top of the world — he ran into his nemesis Mordechai, upright as ever, refusing to bow.

One can only imagine the anger and frustration Haman must have experienced, simultaneously feeling so powerful, yet so invalidated by this Jew’s refusal to bow down. How dare you?! he must have been screaming to himself.

Yet the words that actually came out of his mouth at that moment are simply astounding: “All of this is worth nothing to me so long as I see Mordechai the Jew sitting at the king’s gate!” (Esther 5:13)

It’s the tunnel vision that allows a single failure to overshadow numerous accomplishments,

Haman had it all - power, prestige, honor, wealth and children. He had personal parties with the king and queen. The entire empire bowed before him. And all of that was worth nothing? Haman forged a far more destructive path than simple anger or frustration when things do not go right. He negated the things that he did have because of the things he didn’t have.

We all have a voice of Haman within us. It’s the voice that desires to minimize and ignore real and valid accomplishments because we didn’t achieve our ultimate goal. It’s the attitude that says hard earned victories weren’t worth the effort because we fell short at the end. It’s the tunnel vision that allows a single failure to overshadow numerous accomplishments, or a single offensive incident to throw away years of friendship. “All of this was worth nothing.”

It’s the voice that tells us Brooks Conrad should be thrown out of Atlanta for his miserable playoff performance, despite his invaluable contributions along the way.

Life is full of ups and downs, successes and failures. We commit to not yell at our kids, to refrain from speaking gossip during a specific hour during the day, to eat right. Everything is great for a week, and then we fail. Those are the Haman moments. The Haman voice within us says to forget it, to give up, that the whole thing wasn’t worth it anyway. It’s the voice that focuses on the failure, on what we don’t have, rather than on the success that led up to that moment.

The only tragedy of the Brooks Conrad story would be if it concluded with his decision to throw in the towel and hang up his cleats. A decade of hard work and achievement cannot be defined or overshadowed by one bad night.

In fact, our failures can be utilized to accomplish the exact opposite of the Haman voice: Take the time to look back, reflect, and celebrate the success you had until that point…and then start again.

Rabbi Yechezkel Freundlich is the Associate Rabbi at Congregation Beth Jacob in Atlanta, Georgia. Ordained at Baltimore’s Ner Israel Rabbinical College, he holds a BA in Psychology from the University of Maryland, and a Master of Science Degree in Professional Counseling from Georgia State University. Drawing on his warmth, humor, and personal experiences, Rabbi "Y" is popular for leading interactive parenting and marriage workshops in Atlanta and elsewhere. Rabbi Freundlich's wife and children have accepted their roles in providing endless material for his videos. He can be reached at rabbiy@bethjacobatlanta.org.

The Hesitant Hero: Queen Esther vs Volodymr Zelensky
Why Are The Prayers Of Yom Kipur So Repetetive?
Ha'azinu 5783: A Time for Unity!
Twisted Thinking
Comments